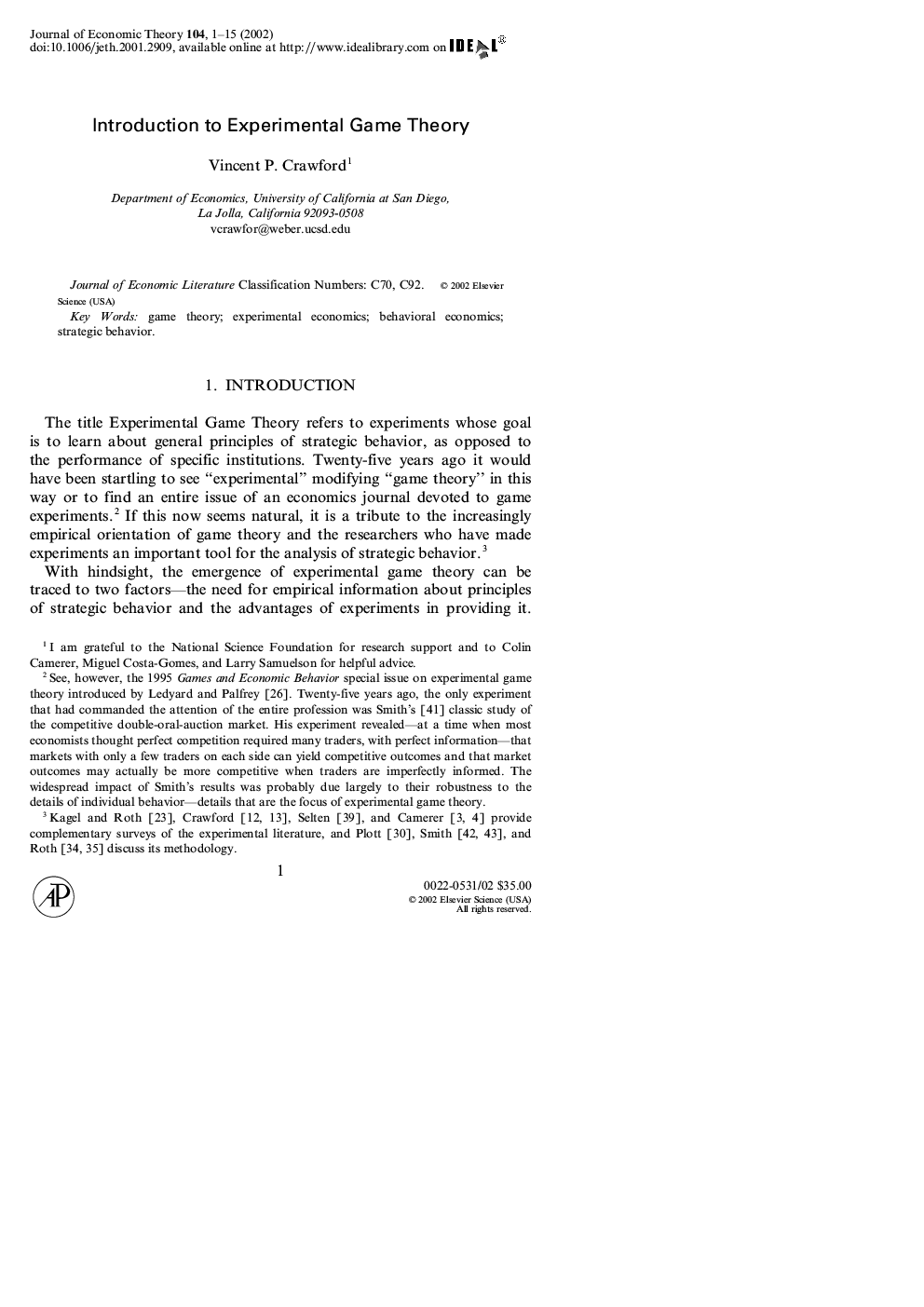 The title Experimental Game Theory refers to experiments whose goal is to learn about general principles of strategic behavior, as opposed to the performance of specific institutions. Twenty-five years ago it would have been startling to see ‘‘experimental’’ modifying ‘‘game theory’’ in this way or to find an entire issue of an economics journal devoted to game experiments.If this now seems natural, it is a tribute to the increasingly 2 See, however, the 1995 Games and Economic Behavior special issue on experimental game theory introduced by Ledyard and Palfrey [26]. Twenty-five years ago, the only experiment that had commanded the attention of the entire profession was Smith’s [41] classic study of the competitive double-oral-auction market. His experiment revealed—at a time when most economists thought perfect competition required many traders, with perfect information—that markets with only a few traders on each side can yield competitive outcomes and that market outcomes may actually be more competitive when traders are imperfectly informed. The widespread impact of Smith’s results was probably due largely to their robustness to the details of individual behavior—details that are the focus of experimental game theory. empirical orientation of game theory and the researchers who have made experiments an important tool for the analysis of strategic behavior.3 3 Kagel and Roth [23], Crawford [12, 13], Selten [39], and Camerer [3, 4] provide complementary surveys of the experimental literature, and Plott [30], Smith [42, 43], and Roth [34, 35] discuss its methodology. With hindsight, the emergence of experimental game theory can be traced to two factors—the need for empirical information about principles of strategic behavior and the advantages of experiments in providing it.This need was long obscured by the game-theoretic custom of trying to predict behavior entirely by theory, applying notions of equilibrium and refinements to the structure of the game.4 This custom admits a role for 4 The custom may reflect the early conception of game theory as a mathematical investigation of the behavior of idealized ‘‘perfectly rational’’ agents and the view that this would be fully adequate to predict strategic behavior. Schelling [37] gave an early and influential dissenting view, which did little to alter the custom among theorists. empirical knowledge about players’ preferences, feasible decisions, and information just as in nonstrategic microeconomics, but it precludes any role for empirical input about the principles that determine how players respond to a given game. Excluding such input is comparatively innocuous in nonstrategic settings, where rationality in the sense of expected-utility maximization often provides a reasonably reliable guide to behavior once preferences, decisions, and information have been identified. But it is far from innocuous in strategic settings, where rationality alone seldom yields definite predictions, reliable or not, and consensus about how to strengthen it is if anything more remote than 25 years ago. As a result, most games of interest in economic applications raise questions about strategic behavior that seem likely to be adequately resolved only by combining theory and empirical knowledge.The need for empirical knowledge about principles of strategic behavior creates a special role for experiments in game theory. The predictions of game theory—particularly noncooperative game theory, which underlies most applications—are notoriously sensitive to the details of the structure of the game, and much of this sensitivity is reflected in observed behavior. Such details can seldom be precisely observed or adequately controlled in the field. The laboratory shares some of these problems, but the control and observation that modern experimental techniques allow often give experiments a decisive advantage in identifying the relationship between strategic behavior and the environment.6 In this endeavor, theory and 6 There is nonetheless a history of valuable empirical work using field data from strategic environments, usually with well-specified, observable structures, as for example in auctions or centralized labor markets. experiment play strongly complementary roles, with theory providing a framework within which to gather and interpret empirical information about behavior, and experiments indicating which parts of the theory are most useful in predicting behavior, and identifying behavioral parameters that theory does not reliably determine. This symposium showcases some of the best recent work in experimental game theory, work that highlights the power of experimental methods to elucidate questions central to game theory and illustrates the possibilities of experimental design. The rest of this introduction describes the papers, which are broadly grouped by game-theoretic topic.7 Section 2 introduces 7 I make no systematic attempt to explain the methods of experimental game theory, instead referring interested readers to the surveys and discussions mentioned above and the expositions in the papers themselves. the first four papers, which present primarily static analyses of behavior in extensive-form games: backward induction, social preferences, implementation, and preplay communication. Section 3 introduces the next three papers, which present dynamic analyses of learning in normal-form games: strategic teaching, learning mixed strategies, and analogies. Section 4 introduces the final paper, which considers the possibility of using a quantal response equilibrium model with risk aversion to explain overbidding (relative to the risk-neutral Nash equilibrium) in first-price sealed-bid auctions.