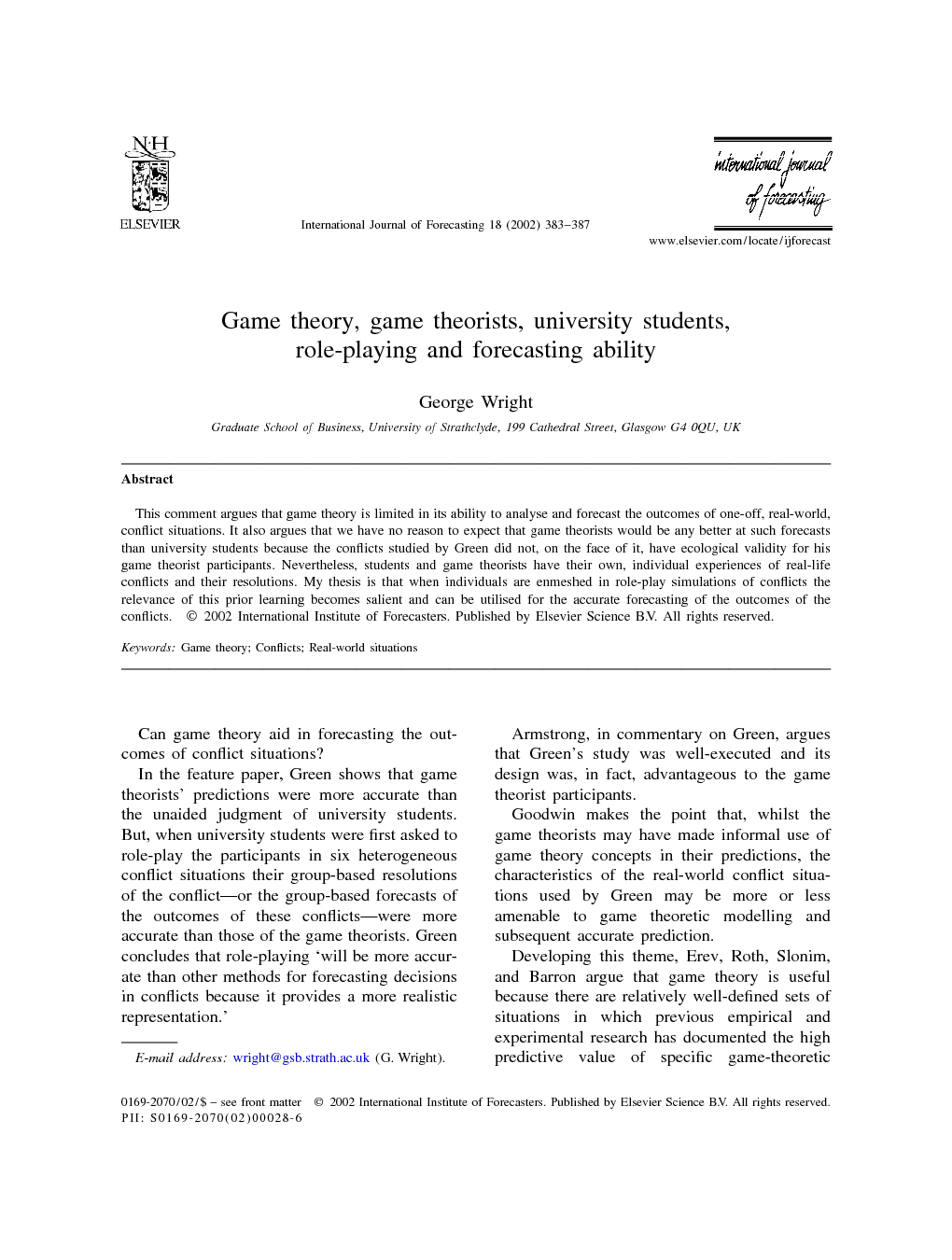 This comment argues that game theory is limited in its ability to analyse and forecast the outcomes of one-off, real-world, conflict situations. It also argues that we have no reason to expect that game theorists would be any better at such forecasts than university students because the conflicts studied by Green did not, on the face of it, have ecological validity for his game theorist participants. Nevertheless, students and game theorists have their own, individual experiences of real-life conflicts and their resolutions. My thesis is that when individuals are enmeshed in role-play simulations of conflicts the relevance of this prior learning becomes salient and can be utilised for the accurate forecasting of the outcomes of the conflicts.

Can game theory aid in forecasting the outcomes of conflict situations? In the feature paper, Green shows that game theorists’ predictions were more accurate than the unaided judgment of university students. But, when university students were first asked to role-play the participants in six heterogeneous conflict situations their group-based resolutions of the conflict—or the group-based forecasts of the outcomes of these conflicts—were more accurate than those of the game theorists. Green concludes that role-playing ‘will be more accurate than other methods for forecasting decisions in conflicts because it provides a more realistic representation.’ Armstrong, in commentary on Green, argues that Green’s study was well-executed and its design was, in fact, advantageous to the game theorist participants. Goodwin makes the point that, whilst the game theorists may have made informal use of game theory concepts in their predictions, the characteristics of the real-world conflict situations used by Green may be more or less amenable to game theoretic modelling and subsequent accurate prediction. Developing this theme, Erev, Roth, Slonim, and Barron argue that game theory is useful because there are relatively well-defined sets of situations in which previous empirical and experimental research has documented the high predictive value of specific game-theoretic models. They summarise two examples: the aggregated-level outcome of entry job markets, and repeated laboratory-based games—where high predictive power is achieved by replacing rationality-based predictions with empirically-based modelling of adaptive learning by the game participants. Erev et al. also demonstrate how the predictive value of such conceptualisations can, in itself, be forecasted and go on to suggest that the value of the role-playing method could also be improved by explicit computation of predictive value. Bolton challenges Green’s method of testing game theory and argues that role-playing is dependent on game theory—in that knowledge of game theory is necessary in order to make an initial design of the role-plays. Bolton argues that game theory, especially when combined with the results from studies in experimental economics, can be a useful tool for prediction. In his commentary, Shefrin documents, from his classroom experience, that formal game theory is unable to predict the behaviour of students in classroom-based role-plays undertaken as part of his game theory course. Developing this theme, Shefrin discusses the design of the Spectrum Auctions and the subsequent bids that were obtained. He shows that the base, game-theoretic, design of the auctions evoked non-rational bids from corporate bidders. He argues that insights from behavioural decision research, such as loss aversion and the winner’s curse, can help explain bidder behaviour. Clearly, game theory is limited in its ability to analyse and forecast the outcomes of one-off, real-world, conflict situations such as the ones Green studied. The forecasting of: (i) generalised market behaviour, and (ii) the outcomes of context-free, laboratory gaming seems the best game-theory-based forecasting that is currently possible. Note that the laboratory gaming forecasts are not pure, game theoretic forecasts since they include behavioural adjustments to formal models and necessitate repeated plays—such that the game outcomes which evoke the adjustments are part of the modelling process.