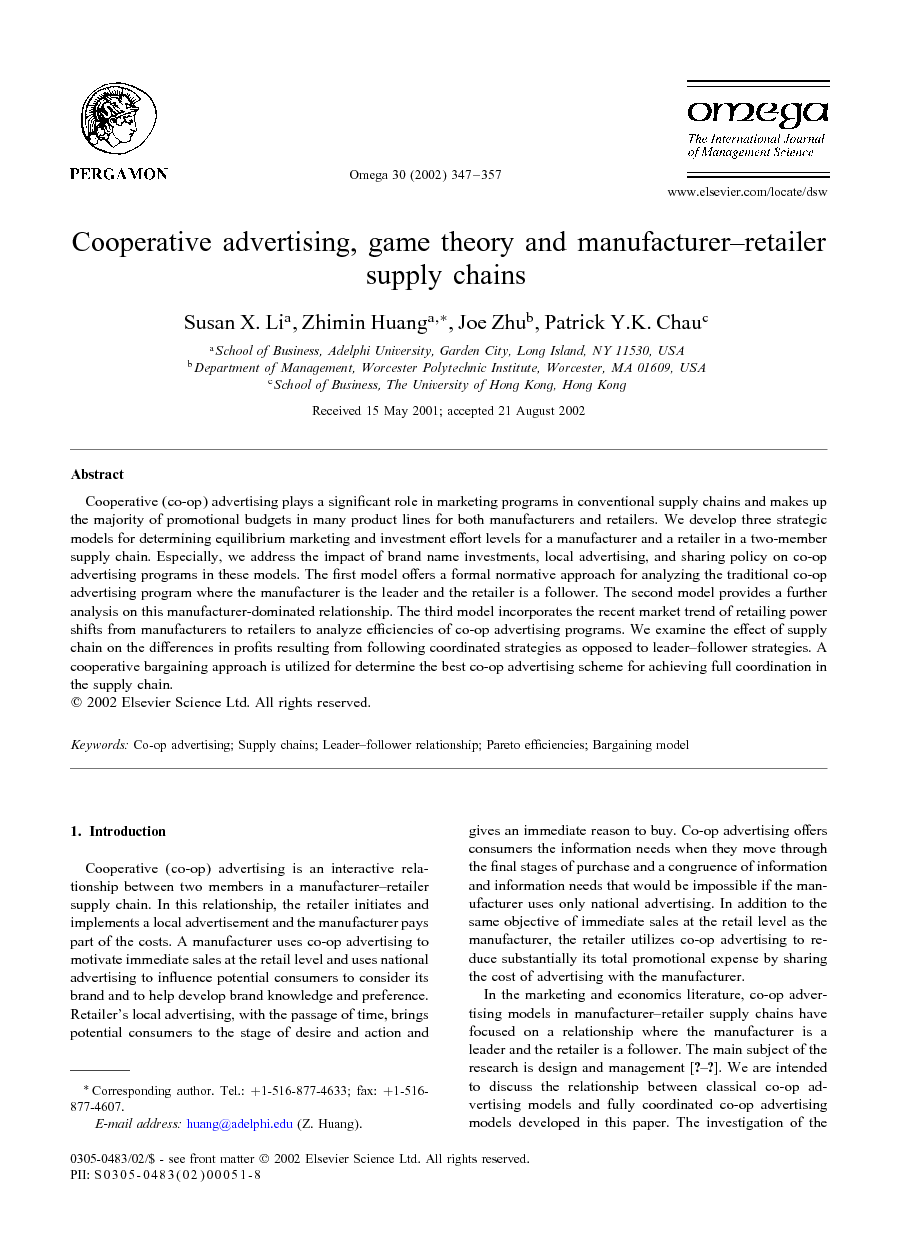 Cooperative (co-op) advertising plays a significant role in marketing programs in conventional supply chains and makes up the majority of promotional budgets in many product lines for both manufacturers and retailers. We develop three strategic models for determining equilibrium marketing and investment effort levels for a manufacturer and a retailer in a two-member supply chain. Especially, we address the impact of brand name investments, local advertising, and sharing policy on co-op advertising programs in these models. The first model offers a formal normative approach for analyzing the traditional co-op advertising program where the manufacturer is the leader and the retailer is a follower. The second model provides a further analysis on this manufacturer-dominated relationship. The third model incorporates the recent market trend of retailing power shifts from manufacturers to retailers to analyze efficiencies of co-op advertising programs. We examine the effect of supply chain on the differences in profits resulting from following coordinated strategies as opposed to leader–follower strategies. A cooperative bargaining approach is utilized for determine the best co-op advertising scheme for achieving full coordination in the supply chain.

This paper addresses optimal pricing and advertising decisions in a manufacturer–retailer supply chain with consumer demand, that depends both on the retail price and on the channel members’ advertising expenditures. Additionally, a cooperative advertising program is considered, where the manufacturer can bear a certain fraction of the retailer’s advertising costs. By means of game theory, we analysed four different relationships within the supply chain: A non-cooperative behavior with equal distribution of power, two situations in which one player dominates his counterpart and a cooperation between manufacturer and retailer. We adopted a model recently published by SeyedEsfahani et al. (2011) and introduced the retailer margin m as a new decision variable. This customization of the original model enabled us to abandon the restrictive assumption of identical margins previously used both in Nash and in Stackelberg retailer equilibrium. Furthermore, our model extends also the work of Xie and Wei (2009), which is a special case with linear price demand (i.e. ν = 1). The main contributions of our research are as follows: (a) Without the assumption of identical margins, the profit split between manufacturer and retailer can be determined unrestricted and solely depending on the underlying set of parameters and game structure. Anyhow, we observed, that a Nash equilibrium leads to identical margins on its own, so that the assumption was justified in that case, but not in the Stackelberg retailer equilibrium. The numerical computations in Section 3 though showed, that our generalized model yields more differentiated results concerning the dominant game structure, which decision makers can use as recommendation for practical problems. (b) A generalization of the price demand function used in SeyedEsfahani et al. (2011) by introducing the parameters α and β. These parameters do not affect the structure of the results (i.e. the ratio between manufacturer’s and retailer’s profit), but exclusively the level of prices, advertising expenditures and profits. Therefore, these parameters can be used to adapt the proposed model more precisely to practical contexts. (c) The cooperation, which is characterized by the lowest retail price and the highest advertising expenditures, produces the highest total profit of all considered games. We showed the feasibility of a cooperation for moderate sets of parameters k and ν and exemplified the asymmetrical Nash bargaining model of Harsanyi and Selten, 1972 and Kalai, 1977, which allows to consider risk attitude and bargaining power contemporaneously. Future research could apply our approach of using the retailer margin as decision variable also to the model of Xie and Neyret (2009), which suffers from the assumption of identical margins in the Nash and Stackelberg retailer equilibrium, too. Moreover, the introduction of additional supply chain members would render possible to analyse not only the interaction between the two echelons, but also the competition between two manufacturers or retailers. The increased complexness could though necessitate the application of metaheuristics (see, e.g. Yu and Huang (2010) for a recent example). In multiple player framework, the forming of coalitions during bargaining seems to be another interesting field of research.