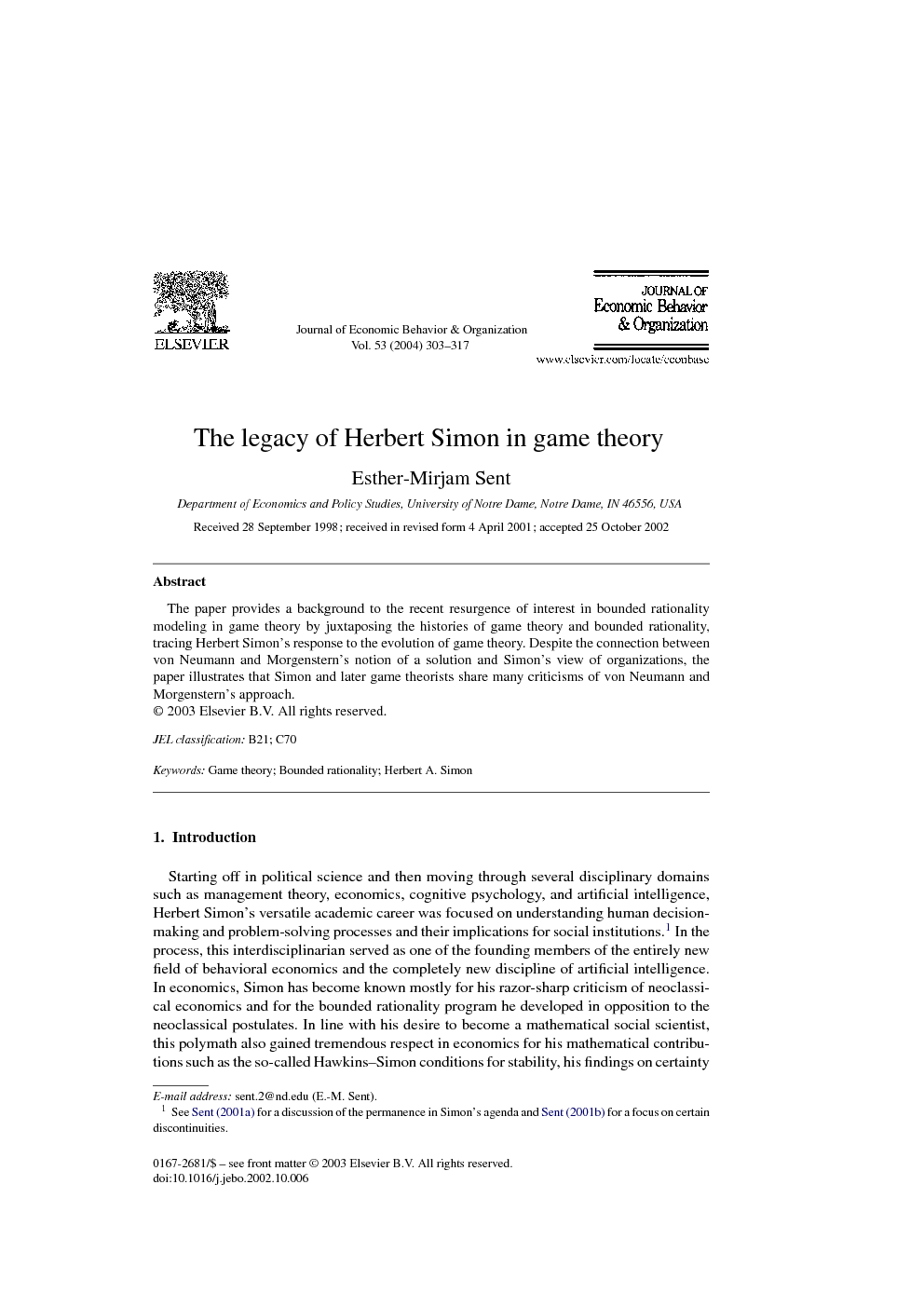 The paper provides a background to the recent resurgence of interest in bounded rationality modeling in game theory by juxtaposing the histories of game theory and bounded rationality, tracing Herbert Simon’s response to the evolution of game theory. Despite the connection between von Neumann and Morgenstern’s notion of a solution and Simon’s view of organizations, the paper illustrates that Simon and later game theorists share many criticisms of von Neumann and Morgenstern’s approach.

Starting off in political science and then moving through several disciplinary domains such as management theory, economics, cognitive psychology, and artificial intelligence, Herbert Simon’s versatile academic career was focused on understanding human decision-making and problem-solving processes and their implications for social institutions.1 In the process, this interdisciplinarian served as one of the founding members of the entirely new field of behavioral economics and the completely new discipline of artificial intelligence. In economics, Simon has become known mostly for his razor-sharp criticism of neoclassical economics and for the bounded rationality program he developed in opposition to the neoclassical postulates. In line with his desire to become a mathematical social scientist, this polymath also gained tremendous respect in economics for his mathematical contributions such as the so-called Hawkins–Simon conditions for stability, his findings on certainty equivalence, his research on size distributions of firms and organizations, and his insights on causality, identifiability, and aggregation. Not surprisingly, economists have tried to employ Simon’s insights in an attempt to strengthen neoclassical economics. For instance, game theorist Ariel Rubinstein (1990) “observed a shift of interest toward expanding economic theory to include bounded rationality elements” (p. 18). Moreover, historian Abu Rizvi (1994) noted that “[i]t is interesting that Simon’s ideas were not used by mainstream theorists for years but have recently been discovered” (p. 19n).2 In addition, the prophet of bounded rationality, Simon (1992b), himself observed: “Readers would not be deceived by the claim that economists flocked to the banner of satisficing man with his bounded rationality. The ‘flocking’ was for a long time a trickle that is now swelling into a respectable stream” (p. 266).3 Yet some game theorists ignored Simon’s role in the invention of bounded rationality for a long period of time. For instance, in the paper that stimulated research on modeling bounded rationality through automata, game theorist Robert Aumann traced his suggestion back no further than Roy Radner’s contributions. In particular, Aumann (1981) claimed that “[f]inite memory has some conceptual ties to Radner’s bounded rationality” (p. 21).4 On another occasion, Aumann (1986) examined how bounded rationality approaches “have evolved over the past 10 or 15 years” (p. 5). Only later did Aumann (1997) make a connection between his suggestion and Simon’s work: “To my knowledge, this area was first extensively investigated by Herbert Simon” (p. 3). However, Aumann criticized Simon for leaving bounded rationality in what he considered to be a state of distress: “Much of Simon’s work was conceptual rather than formal. For many years after his initial work, it was recognized that the area was of great importance, but the lack of a formal approach impeded its progress” (p. 3).5 At the same time, Simon (1955) considered game theory to “be an extremely crude and simplified approximation” (p. 101) in one of the two papers of his quoted by Aumann, 1986 and Aumann, 1997. Surveying the recent bounded rationality literature, John Conlisk (1996), therefore, rightly observed: “Game theorists have recently turned to bounded rationality with enthusiasm” (p. 681). However, whereas Conlisk’s survey focuses almost exclusively on the last 15 years,6 this paper complements it by providing a historical background for the recent resurgence of interest in bounded rationality, focusing almost exclusively on game theory. It considers these developments in relation to Simon’s seminal contributions, for Simon was at a very early stage in the development of his ideas when game theory was also being established. In particular, it shows how early game theorists failed to draw both on Simon’s insistence on the evidence of cognitive limitations in the playing of games and on his early analysis of the implications of these restrictions. Moreover, recent developments that do include such limitations appear to do so in a way that does not reflect Simon’s point of view. Ironically, von Neumann and Morgenstern’s notion of a solution expresses a view of organization more or less in the spirit of James March and Herbert Simon’s (1958) theory in Organizations and Richard Cyert and James March’s (1963) later contribution A Behavioral Theory of the Firm, but this connection has not been incorporated into the growing theory of games with bounded rationality. This paper offers a suggestion as to why this may be the case. The following section juxtaposes the histories of game theory and bounded rationality by tracing the response of Herbert Simon, the father of bounded rationality, to the evolution of game theory. Then, part three surveys the contents of and causes for the current enthusiasm for bounded rationality on the part of game theorists.

In economics, Simon has become mostly known for his razor-sharp criticism of the rationality postulate. In particular, he criticized the four basic assumptions of neoclassical economics. First, the analysis started from the presupposition that each economic agent had a well-defined utility or profit function. Second, all alternative strategies were known to the decision maker. Third, neoclassical economics assumed that all the consequences that follow upon each of these strategies could be determined with certainty. Finally, the comparative evaluation of these sets of consequences was assumed to be driven by a universal desire to maximize expected utility or expected profit. For Simon, these four assumptions clashed with his conviction that there were external social constraints and internal cognitive limitations to decision making, upon which he based the opposing assumptions of his bounded rationality program. First, the bounded rationality program assumed that decision-makers were confronted by the need to optimize several, sometimes competing goals. Second, instead of assuming a fixed set of alternatives among which the decision maker must choose, Simon’s bounded rationality program postulated a process for generating alternatives. Simon believed that under most circumstances it was not reasonable to talk about finding “all the alternatives”. Third, Simon argued that individuals had difficulty coming up with original solutions to problems. The presence of uncertainty about the evaluation of the present and future consequences of alternative strategies led Simon to speculate that the mind functions mostly by applying approximate solutions to problems. Finally, instead of assuming the maximization of a utility function, Simon’s bounded rationality theory postulated a satisficing strategy. It sough to identify, in theory and actual behavior, procedures for choosing that were computationally simpler and argued that individuals picked the first choice that met a pre-set acceptance criterion. The announcement that he had won the 1978 Nobel Prize in Economics, therefore, made Simon feel “a little like being struck by lightning” and caused consternation among many leading economists, for to them models of bounded rationality did not appear as attractive as the axiomatized certainties of neoclassical economics. However, as we have seen, more and more well-respected game theorists are embracing one form or another of bounded rationality. Furthermore, these efforts are partly inspired by a desire to strengthen the Nash program, as opposed to Simon’s interest in advancing a behavioral alternative. Some of the contrasts between these efforts are evidenced by the exchange between Rubinstein and Simon in Modeling Bounded Rationality (Rubinstein, 1998 (pp. 187–194)). Whereas Rubinstein focuses on logical linkages between concepts that appear in our daily thinking on economic situations and the ability to derive interesting analytical conclusions that have some contact with reality, Simon, instead, stresses the importance of empirical and/or experimental testing and the aim to develop models with descriptive and predictive power. Put bluntly, Rubinstein is inclined towards a more analytical science, while Simon defends the importance of a thoroughly empirical one. Given the connection between von Neumann and Morgenstern’s notion of a solution and Simon’s view of organizations and in light of the disconnection between early and later game theory, the recent appeals to bounded rationality on the part of contemporary game theorists come as a bit of a surprise. Yet, as this paper has illustrated, our amazement is lessened by the fact that Simon and later game theorists share many criticisms of von Neumann and Morgenstern’s approach, including their stress on two-person games, theory of coalitions, definition of good strategy, focus on zero-sum games, and solution concept. By juxtapositing the histories of game theory and bounded rationality, this paper has illustrated, then, that Simon may have facilitated the effort on the part of game theorists to use his ideas to solve some of the problems in their program. In adopting bounded rationality, game theorists, in turn, sought to use bounded rationality to overcome some of the obstacles encountered by the Nash program and its associated rationality assumptions. The dependence of the definition of rationality on irrationality, as pointed out by Aumann, is reminiscent of debates in philosophy concerning the definition of concepts in terms of their opposites, which has led to efforts to destabilize dichotomies. In addition, there is the practical challenge of overcoming the bounded rationality of economists in modeling the bounded rationality of economic agents. According to Rubinstein (1998), for example, “[o]ne intriguing idea is that substantive rationality is actually a constraint on the modeler rather than an assumption about the real world” (p. 4). However, these philosophical and practical issues, though important, fall outside the historical focus of this paper.