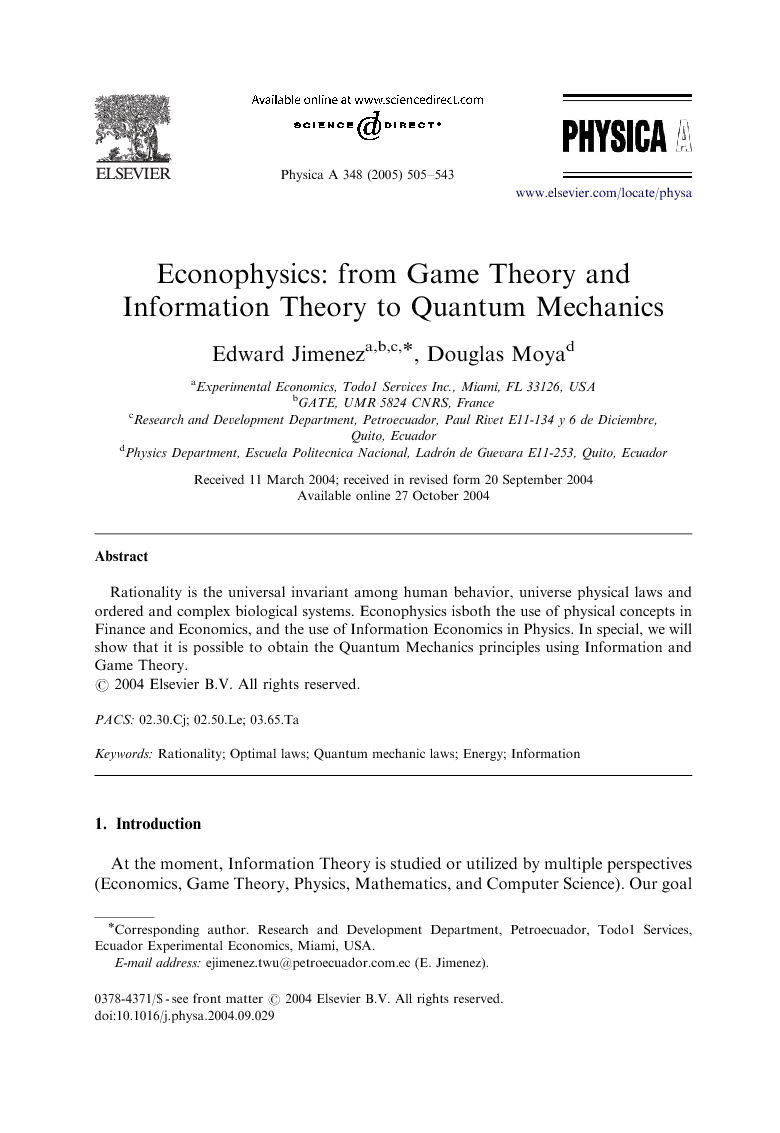 Rationality is the universal invariant among human behavior, universe physical laws and ordered and complex biological systems. Econophysics isboth the use of physical concepts in Finance and Economics, and the use of Information Economics in Physics. In special, we will show that it is possible to obtain the Quantum Mechanics principles using Information and Game Theory.

1. The Universe is structured in optimal laws. Random processes are those that maximize the mean information and are strongly related to symmetries, therefore, to conservational laws. Random processes have to do with optimal processes to manage information, but they do not have anything to do with the contents of it, this is the anthropic principle: Laws and physical constants are designed to produce life and conscience see Ref. [34]. 2. Every physical process satisfies that the action is a locally minimum. It is the most important physical magnitude, after information, because through it is possible to obtain the energy, angular momentum, momentum, charge, etc. Every physical theory must satisfy the necessary (but not sufficient) condition dS=0dS=0, because it is an objective principle. 3. We have demonstrated that the concepts of information and the principle of minimum action dS=0dS=0 leads us to develop the concepts of Quantum Mechanics and to explain the spontaneous decay transitions. Also, we have understood that all physical magnitudes are quadratic mean values of random fluctuations. 4. Information connects every thing in nature, each phenomenon is an expression of totality. Moreover, in quantum gravity, this fact is explained by Wheeler–DeWitt equation. 5. Mass appears were certain symmetries are broken, or equivalently, when the mean information decreases. A very small decrease in information produces enormous amounts of energy. Also, we have shown that there exist a relation between the amount of information and the energy of a system (Eq. (187)). Information, mass and energy are conservative quantities which are able to transform one into another. 6. A interdisciplinary scope it is possible, only, if we suppose that General System Theory is valid because games and information can be seen as particular cases of complex systems. Quantum Mechanics is obtained in the form of a generalized complex system where entities, properties and relations conserve his primitive form and add some other ones related with nature of the physical system.