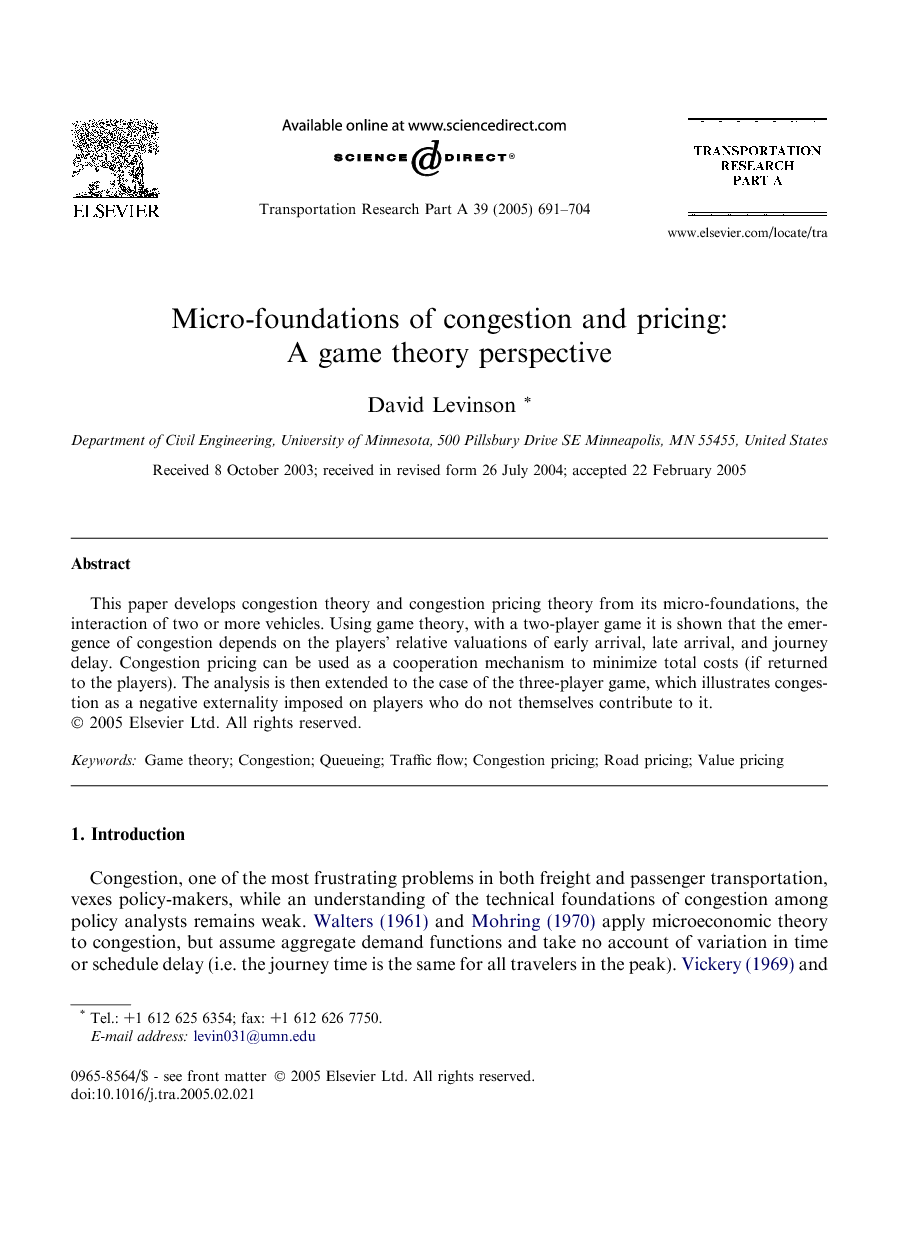 This paper develops congestion theory and congestion pricing theory from its micro-foundations, the interaction of two or more vehicles. Using game theory, with a two-player game it is shown that the emergence of congestion depends on the players’ relative valuations of early arrival, late arrival, and journey delay. Congestion pricing can be used as a cooperation mechanism to minimize total costs (if returned to the players). The analysis is then extended to the case of the three-player game, which illustrates congestion as a negative externality imposed on players who do not themselves contribute to it.

This paper has developed a new way of viewing congestion and congestion pricing in the context of game theory. Simple interactions among players (vehicles) affect the payoffs for other players in a systematic way. Based on the value of time for various activities (time at origin, at destination, or on-the-road), departure times, and consequently congestion, will vary for the players. Under some range of values congestion will occur between non-cooperative players, even if both would be better off making a different decision. A prisoners’ dilemma is one of many possible outcomes. Congestion is an outcome of individually rational, and sometimes globally rational behavior, under certain preferences. Where there is a difference between the individual and global rational outcomes, congestion pricing can be used, which reduces congestion to an optimal level (but may not eliminate it). The actual early, late, and delay penalties depend on the individual’s value of time, and it is easy to extend the model to handle differentiated values of time. This analysis assumed that players played pure strategies. Extensions to consider mixed strategies (where the play varies from day-to-day with some probability) may yield additional insights. For certain travelers and certain trips, what is most important is not the amount of additional journey time, but instead the certainty associated with arrival time. The importance of this factor depends on the preference function of travelers and the type of trip. In particular, in many cases journey time is affected by the unknown. The randomness in the system and lack of real-time information lead to travel being stochastic. Risk averse travelers may control for this by departing earlier. The relaxation of the assumption of perfect information is an important extension of the model. The use of pricing as an information signal (that few if any actually pay) may be an important result.