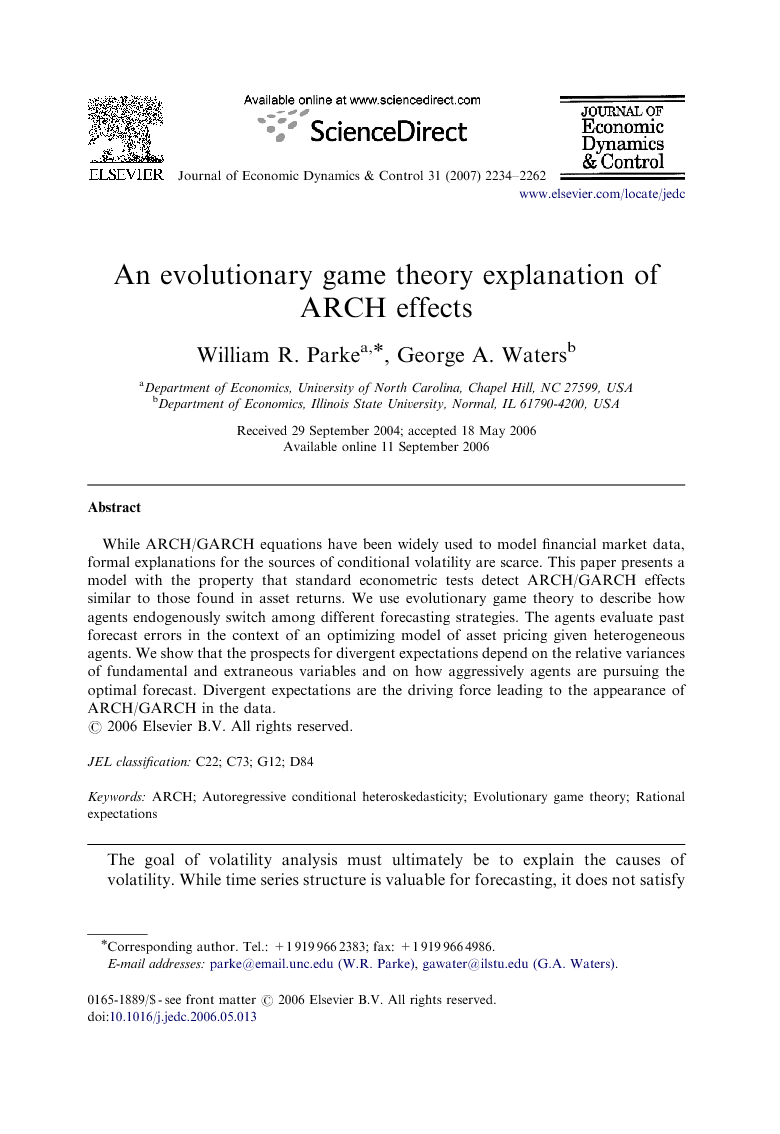 While ARCH/GARCH equations have been widely used to model financial market data, formal explanations for the sources of conditional volatility are scarce. This paper presents a model with the property that standard econometric tests detect ARCH/GARCH effects similar to those found in asset returns. We use evolutionary game theory to describe how agents endogenously switch among different forecasting strategies. The agents evaluate past forecast errors in the context of an optimizing model of asset pricing given heterogeneous agents. We show that the prospects for divergent expectations depend on the relative variances of fundamental and extraneous variables and on how aggressively agents are pursuing the optimal forecast. Divergent expectations are the driving force leading to the appearance of ARCH/GARCH in the data.

While ARCH/GARCH models have proved to be extremely successful empirical econometric techniques, explaining the underlying causes of conditional volatility in financial markets has been a difficult challenge. This paper presents a formal model explaining how such effects arise endogenously when forward-looking agents choose among forecasting strategies. The leading candidate for the source of conditional volatility has long been news of some kind (Engle, 2001 and Engle, 2004). Our results are driven by the arrival of new information, but they do not require any assumption that information arrives at nonuniform rates. We show instead that the process of experimenting with and rejecting sources of information can be a key factor explaining conditional volatility. In fact, our parameter specifying how aggressively agents search for the optimal forecasting strategy is a primary factor in accounting for conditional volatility. Our results do not require any radical departure from rationality. We consider only forward-looking mean–variance optimizing agents who differ only because they choose among three forecasting strategies that are all consistent with the notion of rational expectations. The fundamentalists use the rational expectations solution dominant in that literature. Mysticism follows the same principles, but mistakenly experiments with the idea that the martingale innovations are fundamental. Both fundamentalism and mysticism are, of course, only fully rational if they are adopted by all agents. The reflectivists focus on this point and adopt a forecast taking full account of the behavior of the other two groups of agents. The characteristics of the realized asset price differ dramatically across parameter values. If the martingale variance is small or agents are not very aggressive in pursuing the optimal forecasting strategy, agents tend to agree numerically on the fundamentalist forecast and there is little evidence of volatility clustering. For larger martingale variances and/or more aggressive agents, ARCH/GARCH effects appear in significant fractions of the sample runs. Econometric tests of the simulated data in the latter cases detect ARCH and GARCH effects similar to those found in financial market data. We test for ARCH using Engle's (1982) test and then estimate the GARCH(1,1) model often used in practice. For a range of martingale volatility and a range of agent aggressiveness, the sample statistics indicate that the simulated data is well represented by a GARCH(1,1) model. For the combination of a large martingale innovation variance and very aggressive agents, the evidence points in the direction of ARCH, but in a form more complicated than a GARCH(1,1) model. As we propose in the Introduction to this paper, these results confirm that empirical ARCH/GARCH effects can be an artifact of viewing data generated by heterogeneous expectations from the perspective of a model that assumes a single expectation. One implication of these results is that a test for ARCH can be viewed as a specification test for the assumption that agents agree on a single expectation. ARCH will be observed if the levels of martingale volatility and agent aggressiveness are high enough to make divergent expectations a common feature of the data.From this perspective, the widespread econometric evidence in favor of ARCH/GARCH for variables such as inflation, interest rates, exchange rates, and returns on financial assets presents a challenge to the assumption that agents in models explaining these variables agree on a single expectation.