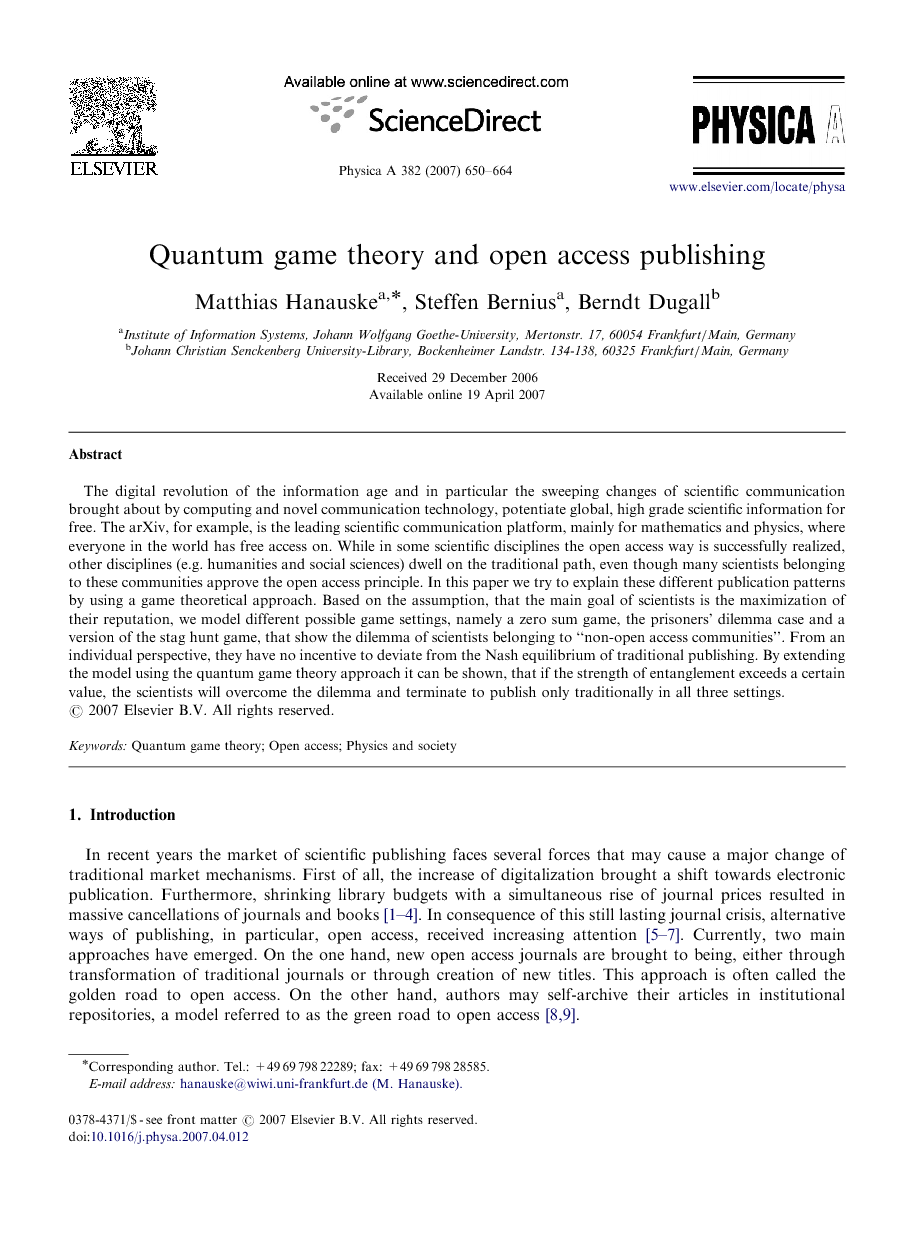 The digital revolution of the information age and in particular the sweeping changes of scientific communication brought about by computing and novel communication technology, potentiate global, high grade scientific information for free. The arXiv, for example, is the leading scientific communication platform, mainly for mathematics and physics, where everyone in the world has free access on. While in some scientific disciplines the open access way is successfully realized, other disciplines (e.g. humanities and social sciences) dwell on the traditional path, even though many scientists belonging to these communities approve the open access principle. In this paper we try to explain these different publication patterns by using a game theoretical approach. Based on the assumption, that the main goal of scientists is the maximization of their reputation, we model different possible game settings, namely a zero sum game, the prisoners’ dilemma case and a version of the stag hunt game, that show the dilemma of scientists belonging to “non-open access communities”. From an individual perspective, they have no incentive to deviate from the Nash equilibrium of traditional publishing. By extending the model using the quantum game theory approach it can be shown, that if the strength of entanglement exceeds a certain value, the scientists will overcome the dilemma and terminate to publish only traditionally in all three settings.

In recent years the market of scientific publishing faces several forces that may cause a major change of traditional market mechanisms. First of all, the increase of digitalization brought a shift towards electronic publication. Furthermore, shrinking library budgets with a simultaneous rise of journal prices resulted in massive cancellations of journals and books [1], [2], [3] and [4]. In consequence of this still lasting journal crisis, alternative ways of publishing, in particular, open access, received increasing attention [5], [6] and [7]. Currently, two main approaches have emerged. On the one hand, new open access journals are brought to being, either through transformation of traditional journals or through creation of new titles. This approach is often called the golden road to open access. On the other hand, authors may self-archive their articles in institutional repositories, a model referred to as the green road to open access [8] and [9]. The realization of open access publishing differs between research disciplines [10]. The prime example of an adoption of the open access publishing paradigm is the arXiv server which is mainly used by physicists and mathematicians. Researchers in this fields normally self-archive their papers on the arXiv (so that everyone has free access to the work) and often additionally submit them to regular scientific journals, where these papers go through the traditional peer review process. Thus the arXiv-model represents neither exactly the golden nor the green road of open access publishing. In contrast most other scientific disciplines do not make use of open access publishing, even though they support this model if asked for [11] and [12]. Instead, they submit research papers to traditional journals that do not provide free access to their articles. Considering that the majority of scientists regard open access publishing as superior to the traditional system, the question arises, why it is only adopted by few disciplines. Based on the assumption, that the main goal of scientists is the maximization of their reputation, we try to answer this question from the perspective of the producers of scientific information by using a game theoretical approach. Scientific reputation originates mainly from two different sources: on the one hand the citations to the articles of a scientist and on the other hand the reputation of the journals he publishes his articles [13]. Starting from a general 2-scientists-game, where two authors have to decide whether they publish open access or not, three different possible game settings are developed. In each case the outcome of the game results in a dilemma, that cannot be solved within the static framework of classical game theory. Therefore we extend the model using the quantum game theoretical approach and show, that if choosing quantum strategies, the players can escape the dilemma. The remainder of the paper is structured as follows. In Section 2 the open access game is developed using the classical game theoretical notation. Firstly we define the general reputation payoff matrix of the game. The three settings of the game cover a zero sum game, the prisoners’ dilemma case, and a variation of the so-called stag hunt game. In Section 3, after a brief introduction into the history of quantum game theory, we define the basic notations of the quantum version of the open access game and discuss the different game settings in detail. Our results are summarized in Section 4.

This article focuses the question why the open access model is only successfully adopted by a few scientific disciplines. We have constructed a game theoretical model, where the scientists’ incentives were described with a reputation dependent payoff matrix. Three game settings were addressed, namely a zero sum game, the prisoners’ dilemma and a stag hunt version of the open access game. By calculating the outcome of the games within a classical game theoretical framework, we have shown that in all cases the scientists face a dilemma situation: considering a potential loss in reputation, incentives to perform open access are missing. These findings change, if quantum strategies are allowed. If the entanglement overruns a certain barrier, quantum strategies become superior to the former Nash equilibrium strategies. In none of the three different game settings the choice of traditional publishing remains to be a rational strategy for the players, if their strategical choices are maximally entangled. The results of this article therefore indicate one possible explanation of the differing publishing methods of scientific communities. In quantum game theory parlance one would say, that scientific disciplines, like mathematics and physics, which had been successful in realizing the open access model, consist of scientists, whose strategical operations are strongly entangled. In contrast, if a scientific community is still imprisoned in the Nash equilibrium of non-open access, there would be a lack of entanglement between the strategical choices of the related scientists of the community.