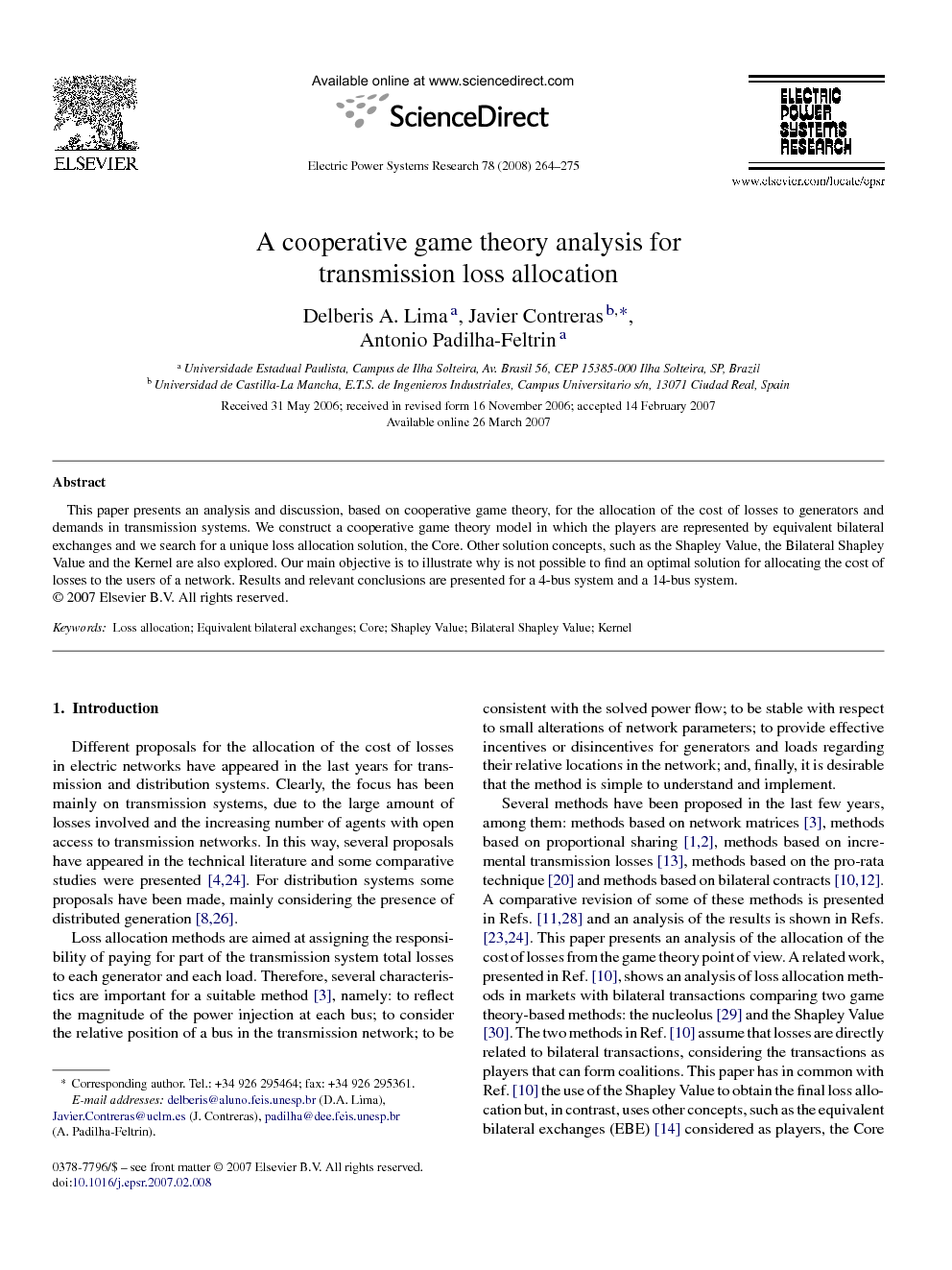 This paper presents an analysis and discussion, based on cooperative game theory, for the allocation of the cost of losses to generators and demands in transmission systems. We construct a cooperative game theory model in which the players are represented by equivalent bilateral exchanges and we search for a unique loss allocation solution, the Core. Other solution concepts, such as the Shapley Value, the Bilateral Shapley Value and the Kernel are also explored. Our main objective is to illustrate why is not possible to find an optimal solution for allocating the cost of losses to the users of a network. Results and relevant conclusions are presented for a 4-bus system and a 14-bus system.

Different proposals for the allocation of the cost of losses in electric networks have appeared in the last years for transmission and distribution systems. Clearly, the focus has been mainly on transmission systems, due to the large amount of losses involved and the increasing number of agents with open access to transmission networks. In this way, several proposals have appeared in the technical literature and some comparative studies were presented [4] and [24]. For distribution systems some proposals have been made, mainly considering the presence of distributed generation [8] and [26]. Loss allocation methods are aimed at assigning the responsibility of paying for part of the transmission system total losses to each generator and each load. Therefore, several characteristics are important for a suitable method [3], namely: to reflect the magnitude of the power injection at each bus; to consider the relative position of a bus in the transmission network; to be consistent with the solved power flow; to be stable with respect to small alterations of network parameters; to provide effective incentives or disincentives for generators and loads regarding their relative locations in the network; and, finally, it is desirable that the method is simple to understand and implement. Several methods have been proposed in the last few years, among them: methods based on network matrices [3], methods based on proportional sharing [1] and [2], methods based on incremental transmission losses [13], methods based on the pro-rata technique [20] and methods based on bilateral contracts [10] and [12]. A comparative revision of some of these methods is presented in Refs. [11] and [28] and an analysis of the results is shown in Refs. [23] and [24]. This paper presents an analysis of the allocation of the cost of losses from the game theory point of view. A related work, presented in Ref. [10], shows an analysis of loss allocation methods in markets with bilateral transactions comparing two game theory-based methods: the nucleolus [29] and the Shapley Value [30]. The two methods in Ref. [10] assume that losses are directly related to bilateral transactions, considering the transactions as players that can form coalitions. This paper has in common with Ref. [10] the use of the Shapley Value to obtain the final loss allocation but, in contrast, uses other concepts, such as the equivalent bilateral exchanges (EBE) [14] considered as players, the Core [18], the Bilateral Shapley Value [5] and [6] and the Kernel [7], [9] and [22]. In addition, our paper deals with a pool-based electricity market and reference [10] studies a bilateral electricity market. These results illustrate why there are so many methods for loss allocation and why it is so difficult to get a method that satisfies all the network users. We use a cooperative game theory approach as a well founded economic framework to qualitatively study loss allocation. We have restricted ourselves to apply it to the EBE methodology, since we consider that it presents several advantages with respect to other methods, mainly the non-arbitrary selection of the slack bus. Other currently used loss allocation methods could be analyzed using the same framework. The loss allocation method proposed is divided into two steps. Assume a dc model, and find unbundled power flows through the network based on the EBE methodology [14]. Obtain the characteristic function of losses corresponding to an individual EBE or a set of EBEs. In our paper, in order to calculate the characteristic function of losses of an EBE or a set of EBEs, we combine the EBE methodology with the loss formula from a dc load flow model. The contributions of this paper are two-fold: (1) To provide a cooperative game theory framework where different existing loss allocation methods can be tested and qualitatively compared. (2) To obtain game-theoretical economic-based solutions to the loss allocation problem, namely Core, Shapley Value, Bilateral Shapley Value and Kernel. The paper is organized as follows. Section 2 presents how to unbundle network flows based on the concept of EBE, Section 3 describes the cost allocation game based on EBE and cooperative game theory, Section 4 presents two case studies where several game theory allocation methods are applied, and Section 5 enumerates relevant conclusions. An Appendix A containing relevant definitions and derivations on shift distribution factors and cooperative game theory is included.

This paper has presented a cooperative game theory framework that uses the EBE methodology to achieve an understanding of the difficulties involved in allocating transmission losses. We have illustrated that no unique solution is possible when allocating transmission losses. In the game the players are EBEs that can form coalitions, which entails losses associated to them. We have proved that, in general, there is no unique game theory solution that satisfies all the rationality constraints of the game, namely the Core. However, the Shapley Value, another less restrictive unique solution, can always be found. Other solution concepts, such as the BSV and the Kernel do not necessary lead to a unique solution, due to the absence of superadditivity in the game: it is not always better for an EBE to form a coalition with another EBE to reduce the value of the characteristic function of losses.