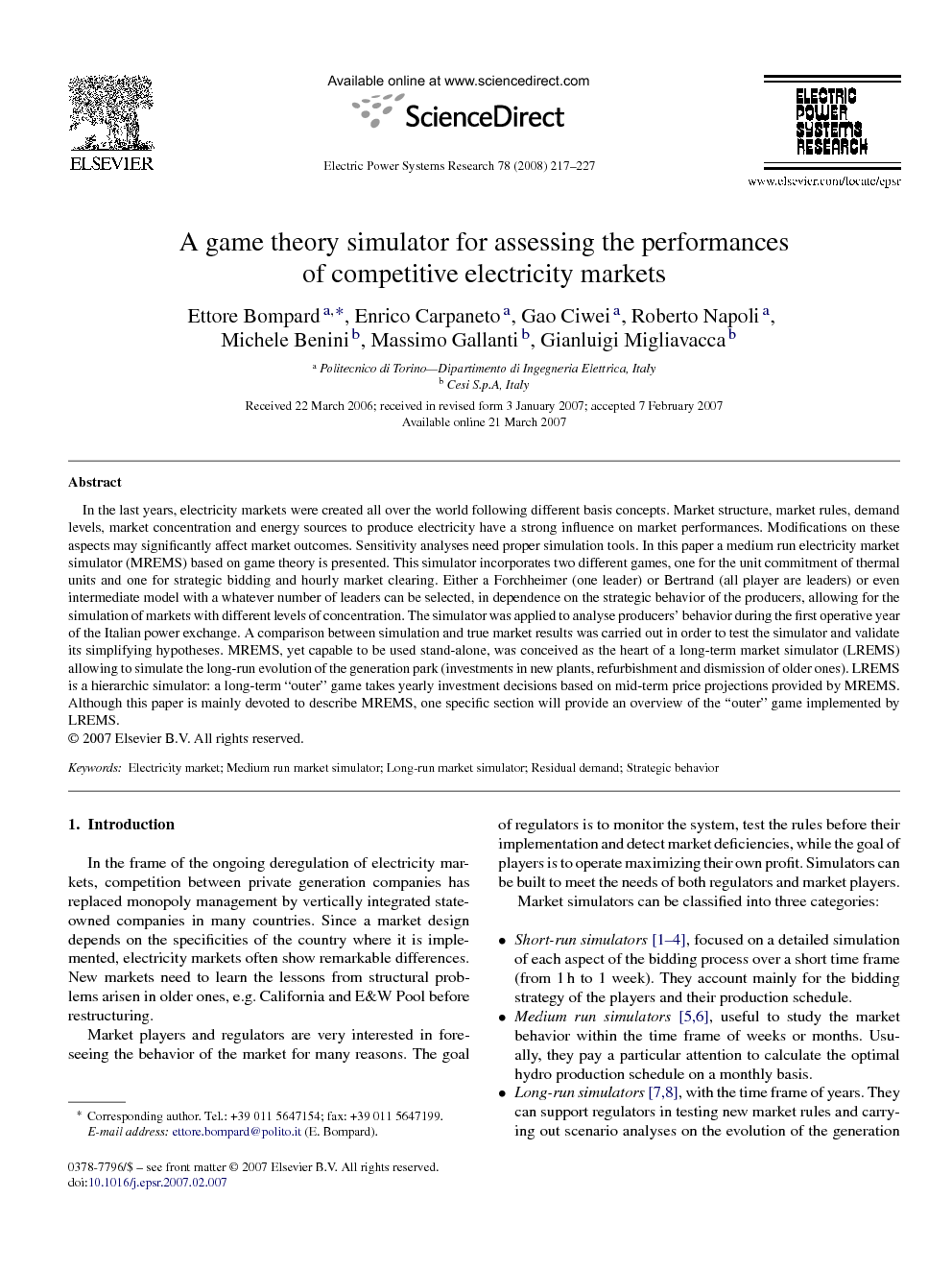 In the last years, electricity markets were created all over the world following different basis concepts. Market structure, market rules, demand levels, market concentration and energy sources to produce electricity have a strong influence on market performances. Modifications on these aspects may significantly affect market outcomes. Sensitivity analyses need proper simulation tools. In this paper a medium run electricity market simulator (MREMS) based on game theory is presented. This simulator incorporates two different games, one for the unit commitment of thermal units and one for strategic bidding and hourly market clearing. Either a Forchheimer (one leader) or Bertrand (all player are leaders) or even intermediate model with a whatever number of leaders can be selected, in dependence on the strategic behavior of the producers, allowing for the simulation of markets with different levels of concentration. The simulator was applied to analyse producers’ behavior during the first operative year of the Italian power exchange. A comparison between simulation and true market results was carried out in order to test the simulator and validate its simplifying hypotheses. MREMS, yet capable to be used stand-alone, was conceived as the heart of a long-term market simulator (LREMS) allowing to simulate the long-run evolution of the generation park (investments in new plants, refurbishment and dismission of older ones). LREMS is a hierarchic simulator: a long-term “outer” game takes yearly investment decisions based on mid-term price projections provided by MREMS. Although this paper is mainly devoted to describe MREMS, one specific section will provide an overview of the “outer” game implemented by LREMS.

In the frame of the ongoing deregulation of electricity markets, competition between private generation companies has replaced monopoly management by vertically integrated state-owned companies in many countries. Since a market design depends on the specificities of the country where it is implemented, electricity markets often show remarkable differences. New markets need to learn the lessons from structural problems arisen in older ones, e.g. California and E&W Pool before restructuring. Market players and regulators are very interested in foreseeing the behavior of the market for many reasons. The goal of regulators is to monitor the system, test the rules before their implementation and detect market deficiencies, while the goal of players is to operate maximizing their own profit. Simulators can be built to meet the needs of both regulators and market players. Market simulators can be classified into three categories: • Short-run simulators [1], [2], [3] and [4], focused on a detailed simulation of each aspect of the bidding process over a short time frame (from 1 h to 1 week). They account mainly for the bidding strategy of the players and their production schedule. • Medium run simulators [5] and [6], useful to study the market behavior within the time frame of weeks or months. Usually, they pay a particular attention to calculate the optimal hydro production schedule on a monthly basis. • Long-run simulators [7] and [8], with the time frame of years. They can support regulators in testing new market rules and carrying out scenario analyses on the evolution of the generation park and producers in taking strategic decisions regarding investment in production capacity. In electricity markets, producers interact one with another taking into account that their results are influenced by competitors’ decisions. Game theory is well suited for analysing these kinds of situations [9], [10] and [11]. It has been successfully applied in many fields: information technology [12], transportation industry [13], stock market [14], sociology [15] and [16] and electricity markets [17], [18], [19] and [20]. There are comparatively more examples of short-run simulators than of medium and long-term ones. Short-run simulators are easier to create because they don’t need to consider many uncertainties that can occur in the long run. Moreover, longer-term simulators are often based on shorter-term ones. Applying game theory to calculate analytically equilibrium conditions is not easy, especially when a realistic market modelization is required. In fact, taking into account the non-convex and non-differentiable nature of the stepwise aggregated bidding curves, equilibria may not exist or not be unique [20]. On the other hand, if the market player can find the global optimal in each iteration as ensured by the step function of the producer bids and the numerical approach to find the optimal in this paper, we can avoid all the problems relate to local Nash equilibrium [21] as well as the convex and differentiability requirement. In this paper, we present a new medium run electricity market simulator (MREMS), based on game theory and a very detailed modelization of the generation park. Even if it has been thought for the medium run (e.g. 1 year), it models the day-ahead market with an hourly detail. Although the Italian electricity market is zonal, the present version of the simulator does not consider market zones. The reason is that MREMS was conceived as a part of a long-run electricity market simulator (LREMS), implemented as a game as well, that hierarchically calls MREMS for performing yearly price projections. As MREMS is called frequently, we wanted the algorithm to be very fast, yet maintaining a detailed description of the market. Thus, as a first level of approximation, price differences between zones were considered not crucial for long-term evaluations and omitted. We are thinking of including zones in future versions of the simulator. MREMS models in detail the bidding process of the producers and the market clearing using a realistic model of producers’ bids, considering the real schedule of hydro energy, and accounting for the unit commitment of the thermal plants. Producers’ strategic bidding is modeled in the form of a price mark-up over a minimum price offer that can be chosen according to different criteria (production marginal costs, average costs, etc.) in order to capture different attitudes of the producers in the market. This paper is composed of the following sections. In Section 2 the structure of MREMS is introduced. The equivalent demand representation used for thermal plants bidding is described in Section 3 while the game approach to the unit commitment of the thermal plants is detailed in Section 4. Section 5 analyses alternative options for the minimum price bids of the thermal plants. The game mechanism for modeling the market clearing is introduced in Sections 6 and 7 presents an application of MREMS to the Italian market and discusses the corresponding results. Section 8 introduces briefly the long-term game implemented by LREMS. Conclusions are drawn in Section 9.

This paper describes the main features of MREMS, a new medium run simulator based on game theory. What distinguishes this simulator from other models described in the literature is its ability to deal with real data. In fact, the characteristics of the thermal plants are modeled with great realism (technical minima, cost functions, flexibility, maintenance, unavailability), as well as the typical behavior of hydro generation (power constraints, energy monthly constraints and peak-shaving behavior, that usually means producing when prices are at their highest). Different bidding models that can take into account both variable and fixed costs have been implemented. Incumbent players’ capability to exercise market power has been considered by means of game theory models. Both Forchheimer and Bertrand models can be chosen as well as any intermediate one. This allows a better fitting with market characteristics. These characteristics of flexibility and realism, together with an excellent record in computation time make MREMS the ideal tool to make medium run “what-if” analyses, e.g. for assessing the impact on the market of new regulatory provisions. Additionally, MREMS may also be run as a part of the long-term simulator LREMS, briefly described in the paper too. LREMS estimates long-term investment attitudes of market players (new plants build-up as well as refurbishment or dismission of older ones). This simulator is conceived as a hierarchical game: an “outer” game takes strategical decisions, calling MREMS to get yearly price projections. Both MREMS and LREMS show that games theory is not only worth for creating conceptual models based on hyper simplifying hypotheses, but can also be applied to simulate realistic market frameworks. And, what is most important, these results have been obtained while preserving a very brilliant performance in terms of calculation time (100–200s for 1 year of simulation with MREMS, 1.5 h for 20 years of simulation with LREMS). Future developments include the implementation of market zones that will be carried out with an eye to keeping calculation as fast as possible.