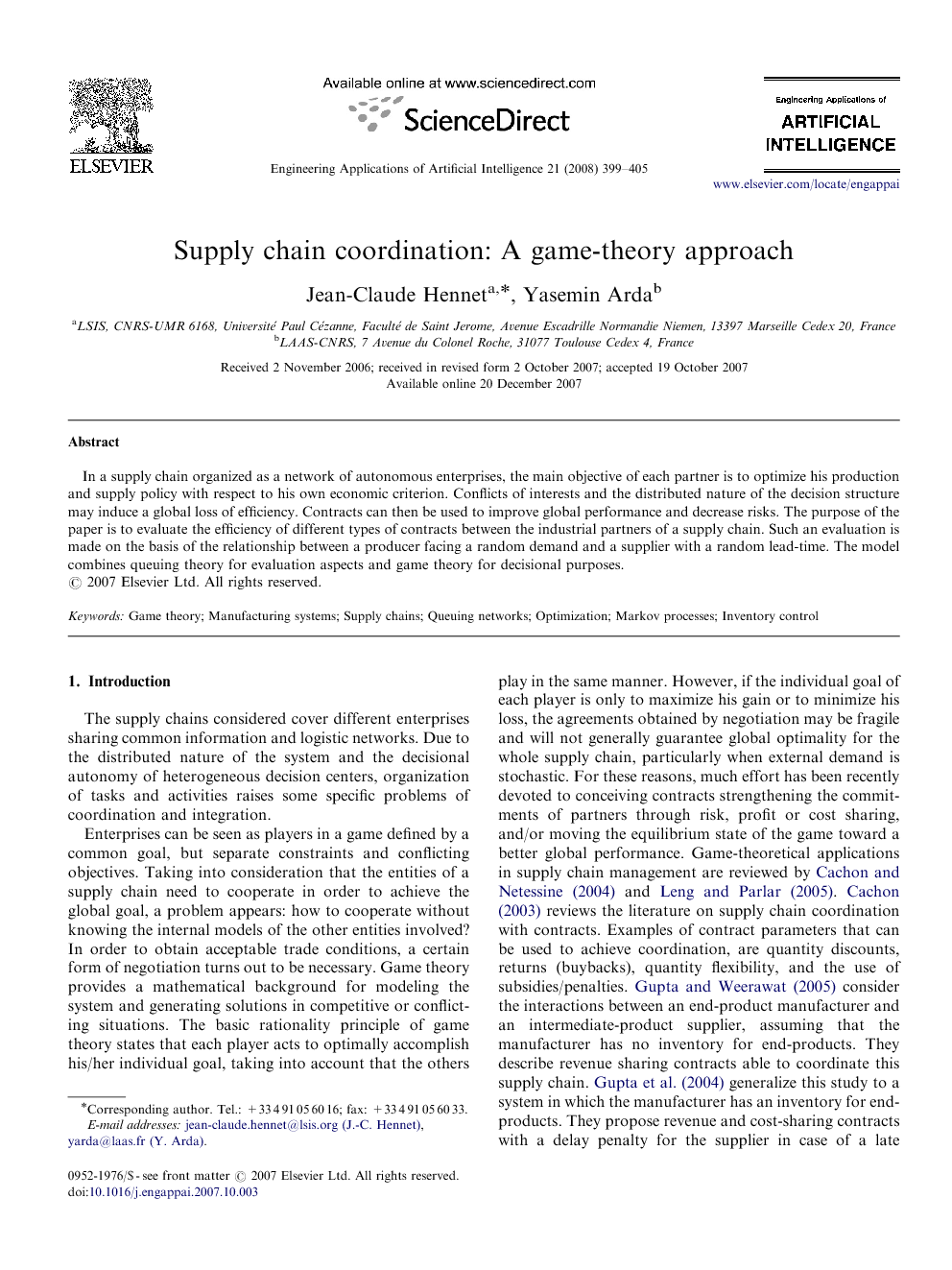 In a supply chain organized as a network of autonomous enterprises, the main objective of each partner is to optimize his production and supply policy with respect to his own economic criterion. Conflicts of interests and the distributed nature of the decision structure may induce a global loss of efficiency. Contracts can then be used to improve global performance and decrease risks. The purpose of the paper is to evaluate the efficiency of different types of contracts between the industrial partners of a supply chain. Such an evaluation is made on the basis of the relationship between a producer facing a random demand and a supplier with a random lead-time. The model combines queuing theory for evaluation aspects and game theory for decisional purposes.

Manufacturer–retailer supply chains commonly adopt a wholesale price mechanism in practice. This mechanism, however, has often led manufacturers and retailers to situations of conflicts of interest, resulting in an inefficient supply chain. For instance, due to uncertain market demand and aversion to incurring inventory costs, retailers prefer to order flexibly from manufacturers so as to accommodate fluctuating market demand. On the other hand, in order to hedge against the risks of over- and under-production, manufacturers prefer retailers to place full orders as early as possible. This conflict between the retailer and the manufacturer can lead to actions that are not system-wide optimal, thereby resulting in an inefficient supply chain. Such problems have been encountered by companies such as Mattel, Inc., a toy maker (see, e.g., Barnes-Schuster et al., 2002). Motivated by this observation, we address in this paper the issue of whether an option mechanism is a viable alternative to achieving an efficient supply chain. The option mechanism is characterized by two parameters, namely the option price o and the exercise price e. The option price, in essence, is an allowance paid by the retailer to the manufacturer for reserving one unit of the production capacity. The exercise price is to be paid by the retailer to the manufacturer for one unit of the product purchased by exercising the option. Option mechanisms have attracted substantial attention not only in the context of financial market, pioneered by Black and Scholes (1973), but also in the area of supply chain management (SCM) (please refer to Section 2). In fact, option mechanisms have been extensively applied in various industries such as fashion apparel (Eppen and Iyer, 1997), toys (Barnes-Schuster et al., 2002), and electronics ( Billington, 2002 and Carbone, 2001). Relationships between manufacturers and retailers in supply chains have dramatically changed in recent years. One such change is evidenced by the fact that partnerships have become prevalent in supply chains. A typical example is the numerous operating modes based on cooperative relations that have been widely adopted in the practice of SCM, such as vendor managed inventory (VMI), holding cost subsidies, and consignment. These operating modes have significantly improved the overall performance of supply chains. Such industry environment motivates us to address the problem under study by way of a cooperative game approach. Again, much of the literature on supply chain coordination has focused on developing incentive contract forms, and did not take into account issues concerning implementation of these contract forms. However, profit allocations differ under different coordinating contracts. The ultimate implementation outcome of a coordinating contract form inevitably depends on supply chain members’ individual risk preferences and negotiating powers. Therefore, given that an incentive contract form has been derived, two important questions remain: (i) What coordinating contracts are feasible? (ii) How do supply chain members’ individual risk preferences and negotiating powers impact the ultimate outcome? Supply chain coordination is an important issue in SCM. Various contract types have been designed to align supply chain members’ incentives to drive the optimal action in the supply chain. However, it is clear that feasible coordinating contracts are those that leave each party to be at least as well off as that party would be without these contracts. Motivated by this, we propose a notion called the core of a contract set, which is a subset of the contract set consisting of all the contracts satisfying the coordination requirement. Again, noting that the wholesale price mechanism is prevalently used in practice, we take the profit level under the wholesale price mechanism as a benchmark and derive the core of option contracts by taking a cooperative game approach. We demonstrate that option contracts can coordinate the supply chain and achieve Pareto-improvement. Hence, the manufacturer and the retailer will both have strong incentives to adopt the option mechanism rather than the wholesale price mechanism. Even though every option contract in the core, compared with the wholesale price mechanism, can coordinate the supply chain with Pareto-improvement, the profit allocations between the retailer and the manufacturer differ for different option contracts in the core. As a result, the retailer and manufacturer will negotiate the option contract from the core to implement. Obviously, the outcome depends heavily on individual members’ negotiating powers, as well as their risk preferences. By taking these factors into consideration, we identify the option contract that the retailer and manufacturer both agree to implement according to Nash’s bargaining model and Eliashberg’s model, and explore analytically the effects of these factors on the ultimate outcome. The remainder of this paper is organized as follows: In Section 2 we review the related literature. In Section 3 we introduce the model. In Section 4 we analyze the model. In Section 5 we examine supply chain coordination with option contracts and discuss the related characteristics. We explore analytically in Section 6 the selection of option contracts and the sharing of the extra profit gained from coordination, taking into consideration the effects of members’ risk preferences and negotiating powers. We conclude the paper and suggest topics for future research in Section 7. We give all the proofs in the supplementary Appendix, which appears as an online electronic companion of the paper.

In view of the current industry environment in which cooperative relations are increasingly becoming prevalent in supply chains, we took a cooperation approach in this paper to address the coordination issues for manufacturer–retailer supply chains using option contracts. Given that the wholesale price mechanism is the prevalent form used in manufacturer–retailer supply chains in practice, we took the profit level under the wholesale price mechanism as the benchmark against which we compared our developed option contracts. Our study demonstrates that, compared with the wholesale price mechanism, any option contract in the core can coordinate the manufacturer–retailer supply chain with Pareto-improvement. In addition, we also explored analytically the issues concerning implementation of the coordinating option contract form, taking into account supply chain members’ risk preferences and negotiating powers. Our study demonstrates that under the option mechanism: (i) an individual’s risk preference plays a significant role in the coordination outcome. Specifically, when the retailer and manufacturer are both risk-averse, the more risk-averse a member is, the smaller share of the extra profit it will obtain. When the retailer and the manufacturer are equally risk-averse or both are risk-neutral, they will split the extra profit in equal proportions. (ii) In addition to risk preferences, an individual’s negotiating power also has significant effects on the ultimate outcome. The higher a member’s relative negotiating power is, the higher the compensation fee it will receive from the other side, and vice versa. Our findings provide a relatively comprehensive insight on how option contracts can be used to coordinate a manufacturer–retailer supply chain. It is worth noting that for any option contract in the core N, both the manufacturer and the retailer operate under voluntary compliance, which means that the manufacturer’s optimal production quantity coincides with the retailer’s optimal reserved quantity, given the option contract terms (which can be seen from Proposition 4). Clearly, to a large extent, this property improves the robustness of the option contracts developed in this paper. Besides, it should also be noted that the option contracts in the core N are “distribution-free”, which implies that they can be utilized to coordinate the supply chain without knowing the demand distribution of the retailer. This property renders their implementation easier in practice. In addition, as a remark, we should point out that in our model we neglected the penalty cost for demand that is not satisfied. In fact, we have checked that such an additional consideration has no effect on the results developed in this paper, other than complicating the notation. In addition, we wish to point out that the buy-back contract and the option contract differ fundamentally in their impacts on the behaviours of supply chain members and on the cash flow of the supply chain. For example, in contrast to the buy-back contract under which the retailer often places the order after the commencement of the production season, the option contract prompts the retailer to order before the production season begins. Hence, under the option contract, the retailer can take advantage of order quantity flexibility to better accommodate changes in demand. On the other hand, the manufacturer enjoys the retailer’s early commitment and can have better capacity and materials planning. However, this is not the case for buy-back contracts. As a natural extension of our work, future studies should consider coordination issues in supply chains with bidirectional options by which the retailer can adjust freely the initial order quantity both upwards and downwards. Attempts to study this issue have been made by Milner and Rosenblatt (2002) and Wang and Tsao (2006), who considered the issue from the buyer’s perspective.