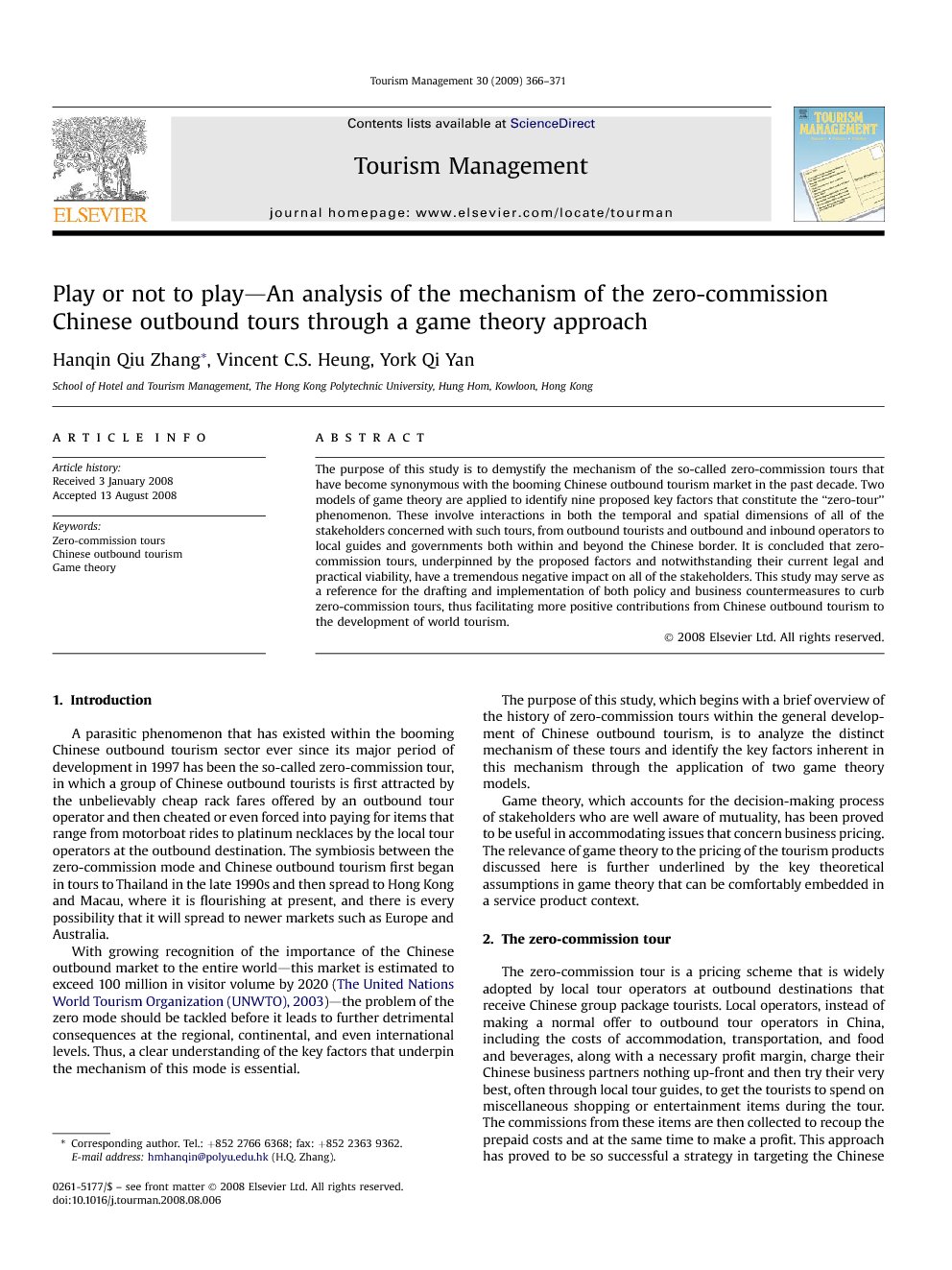 The purpose of this study is to demystify the mechanism of the so-called zero-commission tours that have become synonymous with the booming Chinese outbound tourism market in the past decade. Two models of game theory are applied to identify nine proposed key factors that constitute the “zero-tour” phenomenon. These involve interactions in both the temporal and spatial dimensions of all of the stakeholders concerned with such tours, from outbound tourists and outbound and inbound operators to local guides and governments both within and beyond the Chinese border. It is concluded that zero-commission tours, underpinned by the proposed factors and notwithstanding their current legal and practical viability, have a tremendous negative impact on all of the stakeholders. This study may serve as a reference for the drafting and implementation of both policy and business countermeasures to curb zero-commission tours, thus facilitating more positive contributions from Chinese outbound tourism to the development of world tourism.

A parasitic phenomenon that has existed within the booming Chinese outbound tourism sector ever since its major period of development in 1997 has been the so-called zero-commission tour, in which a group of Chinese outbound tourists is first attracted by the unbelievably cheap rack fares offered by an outbound tour operator and then cheated or even forced into paying for items that range from motorboat rides to platinum necklaces by the local tour operators at the outbound destination. The symbiosis between the zero-commission mode and Chinese outbound tourism first began in tours to Thailand in the late 1990s and then spread to Hong Kong and Macau, where it is flourishing at present, and there is every possibility that it will spread to newer markets such as Europe and Australia. With growing recognition of the importance of the Chinese outbound market to the entire world—this market is estimated to exceed 100 million in visitor volume by 2020 (The United Nations World Tourism Organization (UNWTO), 2003)—the problem of the zero mode should be tackled before it leads to further detrimental consequences at the regional, continental, and even international levels. Thus, a clear understanding of the key factors that underpin the mechanism of this mode is essential. The purpose of this study, which begins with a brief overview of the history of zero-commission tours within the general development of Chinese outbound tourism, is to analyze the distinct mechanism of these tours and identify the key factors inherent in this mechanism through the application of two game theory models. Game theory, which accounts for the decision-making process of stakeholders who are well aware of mutuality, has been proved to be useful in accommodating issues that concern business pricing. The relevance of game theory to the pricing of the tourism products discussed here is further underlined by the key theoretical assumptions in game theory that can be comfortably embedded in a service product context.

To sum up, it can be seen from the analyses presented above that the zero-commission phenomenon is, in essence, a price-reduction strategy that is adopted by foreign operators to attract Chinese outbound tourists. Its legitimate operation would be out of the question in a market economy, and it is further protected by its unique features as a service product. However, the irony is that these zero tours, even though they have apparently gained legitimacy, must be regulated, if not eradicated, because of their numerous negative consequences. First and foremost, there is the direct harm to tourists, who experience trauma rather than refreshment when they go abroad, thanks to ill treatment from local guides when they do not buy what they are expected to buy. Moreover, the negative media exposure of such tours could deal a great blow to the image of the destinations. Taking cognizance of the fierce competition between destinations in vying for visitors, not necessarily limited to travelers from China, this could be disastrous. As Chow (2006) reported, an incident that arose from a zero tour in Hong Kong and subsequently gained media exposure offset the effects of promotional campaigns by the Hong Kong Tourism Board by HK$1 million. Zero tours ultimately harm the industry. When they indulge in zero-sum games in which the gains of one player result in the losses of another, operators have no willingness to initiate more sophisticated strategies such as product renovation or diversification, let alone engage in coordination and collaboration. Thus, the general competitiveness of the industry remains mired in the mud of internal frictions due to the simple yet savage price wars. In the extreme scenario that we saw in the perfect Bayesian equilibrium model, the entire outbound market could collapse thanks to the vicious circles of the zero tour game, which would benefit no one. The travel service industry itself would definitely be the biggest victim. This study, through its identification of the mechanism of the zero-commission tour that is underpinned by the nine proposed key factors, can serve as a foundation upon which future empirical studies of zero-commission tours can be conducted. It can also serve as a reference point for relevant authorities to better tackle this parasitic problem, which, regrettably, has become nearly synonymous with Chinese outbound tourism over the past decade. Related measures that target specific factors can be initiated, and coordinated efforts that command a holistic perspective promoted, thus taking cognizance of the interests of all parties both within and outside of the industry, and, more crucially, both within and outside of the country. It is widely anticipated that in the coming century many aspects of China's tourism development will boost its international significance. Its outbound tourism development is no exception here; however, the “something for nothing” tactic that underpins this development at present is rarely achievable or even a sound sales strategy. Zero-commission tours are flagrant breaches of consumer rights and business ethics, and they should be eliminated to ensure the healthy development of both the Chinese outbound tourism and other similar travel markets.