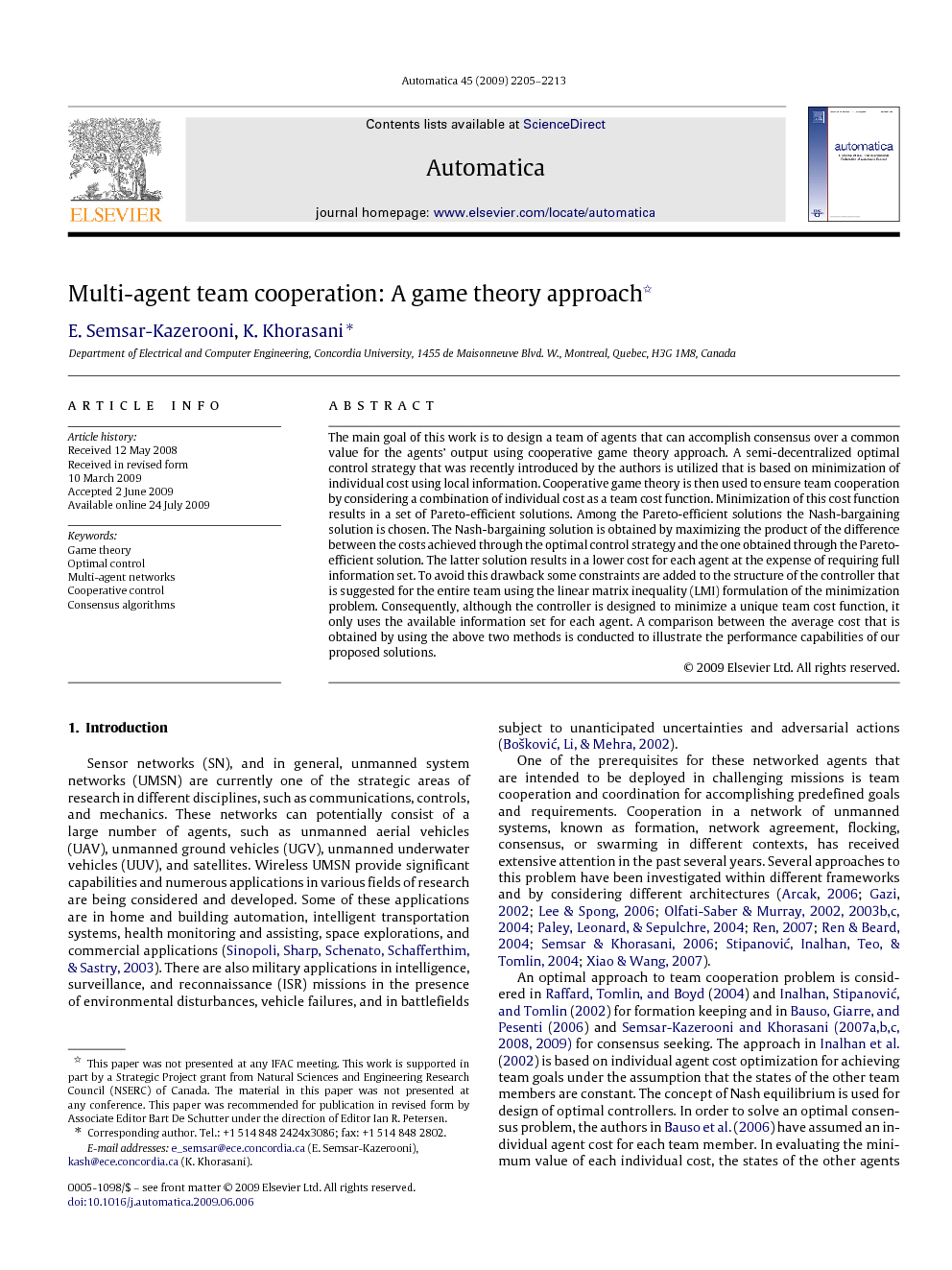 The main goal of this work is to design a team of agents that can accomplish consensus over a common value for the agents’ output using cooperative game theory approach. A semi-decentralized optimal control strategy that was recently introduced by the authors is utilized that is based on minimization of individual cost using local information. Cooperative game theory is then used to ensure team cooperation by considering a combination of individual cost as a team cost function. Minimization of this cost function results in a set of Pareto-efficient solutions. Among the Pareto-efficient solutions the Nash-bargaining solution is chosen. The Nash-bargaining solution is obtained by maximizing the product of the difference between the costs achieved through the optimal control strategy and the one obtained through the Pareto-efficient solution. The latter solution results in a lower cost for each agent at the expense of requiring full information set. To avoid this drawback some constraints are added to the structure of the controller that is suggested for the entire team using the linear matrix inequality (LMI) formulation of the minimization problem. Consequently, although the controller is designed to minimize a unique team cost function, it only uses the available information set for each agent. A comparison between the average cost that is obtained by using the above two methods is conducted to illustrate the performance capabilities of our proposed solutions.

Sensor networks (SN), and in general, unmanned system networks (UMSN) are currently one of the strategic areas of research in different disciplines, such as communications, controls, and mechanics. These networks can potentially consist of a large number of agents, such as unmanned aerial vehicles (UAV), unmanned ground vehicles (UGV), unmanned underwater vehicles (UUV), and satellites. Wireless UMSN provide significant capabilities and numerous applications in various fields of research are being considered and developed. Some of these applications are in home and building automation, intelligent transportation systems, health monitoring and assisting, space explorations, and commercial applications (Sinopoli, Sharp, Schenato, Schafferthim, & Sastry, 2003). There are also military applications in intelligence, surveillance, and reconnaissance (ISR) missions in the presence of environmental disturbances, vehicle failures, and in battlefields subject to unanticipated uncertainties and adversarial actions (Bošković, Li, & Mehra, 2002). One of the prerequisites for these networked agents that are intended to be deployed in challenging missions is team cooperation and coordination for accomplishing predefined goals and requirements. Cooperation in a network of unmanned systems, known as formation, network agreement, flocking, consensus, or swarming in different contexts, has received extensive attention in the past several years. Several approaches to this problem have been investigated within different frameworks and by considering different architectures (Arcak, 2006, Gazi, 2002, Lee and Spong, 2006, Olfati-Saber and Murray, 2002, Olfati-Saber and Murray, 2003b, Olfati-Saber and Murray, 2003c, Olfati-Saber and Murray, 2004, Paley et al., 2004, Ren, 2007, Ren and Beard, 2004, Semsar and Khorasani, 2006, Stipanović et al., 2004 and Xiao and Wang, 2007). An optimal approach to team cooperation problem is considered in Raffard, Tomlin, and Boyd (2004) and Inalhan, Stipanović, and Tomlin (2002) for formation keeping and in Bauso, Giarre, and Pesenti (2006) and Semsar-Kazerooni and Khorasani, 2007a, Semsar-Kazerooni and Khorasani, 2007b, Semsar-Kazerooni and Khorasani, 2007c, Semsar-Kazerooni and Khorasani, 2008 and Semsar-Kazerooni and Khorasani, 2009 for consensus seeking. The approach in Inalhan et al. (2002) is based on individual agent cost optimization for achieving team goals under the assumption that the states of the other team members are constant. The concept of Nash equilibrium is used for design of optimal controllers. In order to solve an optimal consensus problem, the authors in Bauso et al. (2006) have assumed an individual agent cost for each team member. In evaluating the minimum value of each individual cost, the states of the other agents are assumed to be constant. The work in Semsar-Kazerooni and Khorasani, 2007a, Semsar-Kazerooni and Khorasani, 2007b, Semsar-Kazerooni and Khorasani, 2007c, Semsar-Kazerooni and Khorasani, 2008 and Semsar-Kazerooni and Khorasani, 2009 have avoided and removed the above restricting assumptions by decomposing the control input of each team member into local and global components. The global component (referred to as the interaction term) is designed such that individual agent cost function is minimized in a distributed manner. In all the above referenced work the optimal problem is based on the individual cost definition for team members. However, to the best of the authors’ knowledge, a single team cost function formulation has been proposed in only a few works (Fax, 2002, Raffard et al., 2004 and Semsar and Khorasani, 2007). In Fax (2002), optimal control strategy is applied for formation keeping and a single team cost function is utilized. The authors in Raffard et al. (2004) assumed a distributed optimization technique for formation control in a leader–follower structure. The design is based on dual decomposition of the local and global constraints. However, in that approach, the velocity and position commands are assumed to be available to the entire team. In Semsar and Khorasani (2007), a centralized solution is obtained by using a game theoretic approach. It is worth noting that a very few work in this domain use a design-based approach. In fact, many of the earlier work in the literature have focused on analysis only (Jadbabaie et al., 2003, Olfati-Saber, 2006, Olfati-Saber and Murray, 2004, Ren and Beard, 2005 and Tanner et al., 2007). However, the main contribution of this paper is to introduce a novel design-based approach to formally design a controller (the consensus algorithm) to address the output consensus over a common value using a single team cost function within a game theoretic framework. The advantage of minimizing a cost function that describes the total performance of the team is that it can provide a better insight into performance of the entire team when compared to individual agent performance indices. However, the potential main disadvantage of this formulation is clearly the requirement of availability of full information set for control design purpose. In the present work this problem is alleviated and the imposed information structure of the team is taken into account by using a linear matrix inequality (LMI) formulation. For this purpose, a decentralized optimal control strategy that was initially introduced in Semsar-Kazerooni and Khorasani, 2007b and Semsar-Kazerooni and Khorasani, 2008 is used to design controllers based on minimization of individual costs. Since in this approach the solution is obtained through minimization of local cost functions we have at most a person-by-person optimality. However, if a cost function describing the total performance is minimized a lower team cost as well as lower individual costs may be achieved. Subsequently, the idea of cooperative game theory is used to minimize a team cost function which is a linear combination of the cost functions that are used in the optimal approach. This will guarantee that individual cost functions have the minimum possible values for the given team mission. To obtain a solution that is subject to a given information structure as well as to guarantee consensus achievement, a set of LMIs is used to constrain the controller to be designed for the entire team. The organization of the paper is as follows: In Section 2, background information is presented. In Section 3, cooperative game theory is introduced. Application of the game theory to the multi-agent team problem, the design of a semi-decentralized optimal control, and solutions to the corresponding min–max problem are presented in Section 4. Finally, simulation results are conducted and conclusions are stated in Sections 5 and 6, respectively.

A control strategy based on cooperative game theory is applied to the problem of cooperation in a team of unmanned systems. The main goal of the team is to reach at a common output, i.e. to have consensus. To achieve this goal a linear combination of the locally defined cost functions is considered as the team cost function. The Nash-bargaining solution is chosen as “the best solution” among the Pareto-efficient ones that are found by optimizing the team cost function. Unfortunately, to implement this “centralized” strategy one requires to have access to the full team information set. To remedy this major shortcoming the corresponding optimization problem is formulated as a set of LMIs where the available information (“decentralized”) structure is enforced onto the control structure. Consequently, one can now guarantee consensus achievement with minimum individual cost by maximizing the difference between the cost obtained through cooperative and non-cooperative approaches. For comparison purpose, the results obtained by utilization of a semi-decentralized optimal control strategy that the authors have recently developed in Semsar-Kazerooni and Khorasani, 2007b and Semsar-Kazerooni and Khorasani, 2008 are considered as the non-cooperative solution of the consensus problem. Furthermore, the consensus achievement condition is added as a constraint to the set of LMIs. By performing a comparative study between the cooperative game theory and the optimal control strategies, it is concluded that the former approach results in lower individual as well as team cost as predicted. Moreover, whereas the optimal control approach provides a local optimal solution (agent-by-agent), cooperative game theory approach results in a global optimal solution that is subject to the imposed communications constraints. In future work, a quantified index will be presented to measure the effects of decentralization of information on the increase of the team cost. In other words, we will quantify the effects of the connectedness of the information graph on the performance of the team. This quantization criteria may provide an insight into the tradeoffs that exist between the availability of information and the team cost based on the two proposed methods.