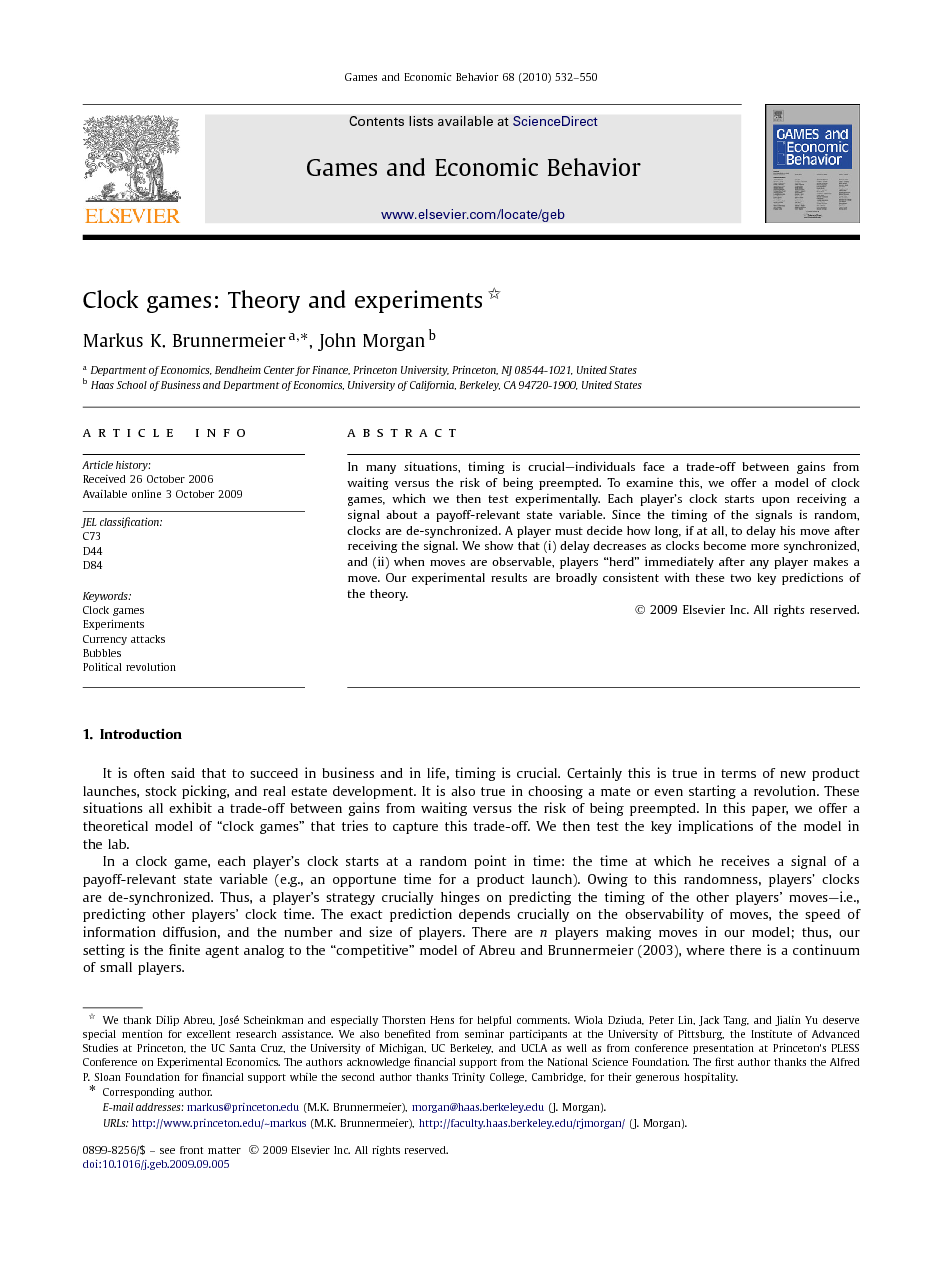 In many situations, timing is crucial—individuals face a trade-off between gains from waiting versus the risk of being preempted. To examine this, we offer a model of clock games, which we then test experimentally. Each player's clock starts upon receiving a signal about a payoff-relevant state variable. Since the timing of the signals is random, clocks are de-synchronized. A player must decide how long, if at all, to delay his move after receiving the signal. We show that (i) delay decreases as clocks become more synchronized, and (ii) when moves are observable, players “herd” immediately after any player makes a move. Our experimental results are broadly consistent with these two key predictions of the theory.

We introduced and analyzed a class of games we refer to as clock games. Players in these games must decide the timing of some strategic action. Tension in the model arises from a trade-off between reaping higher profits from moving later versus the possibility of preemption should other players move more quickly. Effectively, clock games are the oligopolistic analog of the competitive model of Abreu and Brunnermeier (2003). We showed that the unique symmetric equilibrium of the game has a remarkably simple structure—upon receiving a signal, each player optimally waits a fixed amount of time before moving. When moves of other players are observable, delay is still optimal so long as no player has moved. Once the first move is observed, however, all other players optimally move immediately. We then tested the model using controlled laboratory experiments. We varied the observability of moves and the degree of information diffusion. We found broad support for the main implications of the clock games model and, more broadly, for the equilibrium effects of the trade-off between the waiting and preemption motives. Specifically, we observed considerable delay in the timing of moves by players after having observed the signal that the time to move was “ripe.” Indeed, this was the case even when moves were perfectly observable. We found that slower information diffusion led to longer delay while observable moves led to herding following the first move. While many of the qualitative predictions of the model were borne out in the lab, several key discrepancies emerged between theory and observed behavior. First, unlike the theory model, we found that a longer calendar time before players received the signal that the time was “ripe” led to shorter delay and, in some cases, no delay at all. We found the force of the “calendar effect” differed depending on the speed of information diffusion. Finally, we found that the possibility of mistakes, especially when moves were observable, led to less herding behavior than was predicted by the theory. Taken together, these discrepancies suggest the need to modify the models to allow for the possibility of mistakes on the part of players, perhaps by analyzing the clock games framework using quantal response equilibrium as the solution concept. Given the complexity of the equilibrium characterization under full rationality, we felt it appropriate to leave this generalization for future research.