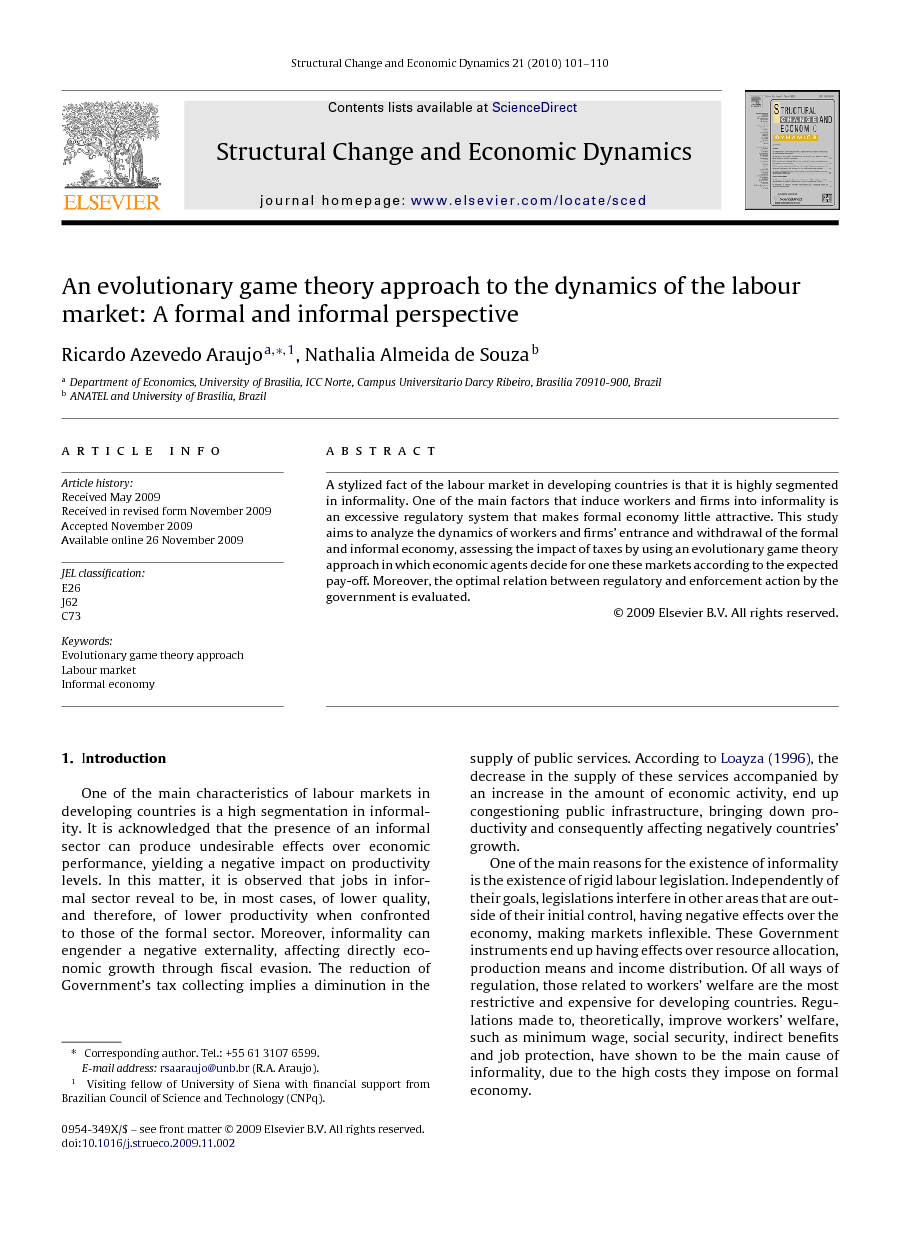 A stylized fact of the labour market in developing countries is that it is highly segmented in informality. One of the main factors that induce workers and firms into informality is an excessive regulatory system that makes formal economy little attractive. This study aims to analyze the dynamics of workers and firms’ entrance and withdrawal of the formal and informal economy, assessing the impact of taxes by using an evolutionary game theory approach in which economic agents decide for one these markets according to the expected pay-off. Moreover, the optimal relation between regulatory and enforcement action by the government is evaluated.

One of the main characteristics of labour markets in developing countries is a high segmentation in informality. It is acknowledged that the presence of an informal sector can produce undesirable effects over economic performance, yielding a negative impact on productivity levels. In this matter, it is observed that jobs in informal sector reveal to be, in most cases, of lower quality, and therefore, of lower productivity when confronted to those of the formal sector. Moreover, informality can engender a negative externality, affecting directly economic growth through fiscal evasion. The reduction of Government's tax collecting implies a diminution in the supply of public services. According to Loayza (1996), the decrease in the supply of these services accompanied by an increase in the amount of economic activity, end up congestioning public infrastructure, bringing down productivity and consequently affecting negatively countries’ growth. One of the main reasons for the existence of informality is the existence of rigid labour legislation. Independently of their goals, legislations interfere in other areas that are outside of their initial control, having negative effects over the economy, making markets inflexible. These Government instruments end up having effects over resource allocation, production means and income distribution. Of all ways of regulation, those related to workers’ welfare are the most restrictive and expensive for developing countries. Regulations made to, theoretically, improve workers’ welfare, such as minimum wage, social security, indirect benefits and job protection, have shown to be the main cause of informality, due to the high costs they impose on formal economy. Labour legislation can establish negative incentives through two channels. The first, explored by Loayza et al. (2005a), creates a harmful effect over the Schumpeterian dynamic of firms; they, on behalf of the rigidity imposed by regulation, find distorted incentives that interfere on their decisions over resource allocation, capital accumulation, competition and innovation, altering the natural process of creation, growth and disappearance of firms. The second channel is the creation and evolution of informal markets. An over designed regulatory system makes formal economy little attractive to economic agents by imposing high access costs, as well as high costs of remaining in legality. These high costs, combined with an institutionally weak Government, with low monitoring and enforcement power, lead progressively to an increase in informality. However informality is in fact only a second best solution once informal producers are scarcely protected by police and courts in cases of crime against property. Yet, these producers are also left with no access to capital markets in order to insure themselves or obtain credit. Moreover, informal agents have little access to other public services whether it be social security, training programs or facilitated credit. Based on these evidences, our study aims to focus on the dynamics of workers’ entrance and withdrawal of the formal and informal economy, also assessing the impact of taxes and the costs incurred by Government when trying to reduce informality. By starting from the stylized facts of the existence of segmentation in informality in many countries, this paper proposes a model suitable to define the correct lines of intervention for a policy maker in order to control informality. The design of the demand and supply of the formal and informal sectors using the dynamic replicator is adopted in order to delineate a market composed of rational agents who take into account the influence of Government and other agents’ choices. The dynamics for wages in the formal and informal sectors is also introduced, which makes wages dependent on demand and supply of labour. The equilibrium analysis of this system results in three possible outcomes: (i) the inexistence of a formal market, (ii) the inexistence of informal market and (iii) the co-existence of both formal and informal markets. The State is considered to be a profit maximizer once it has the duty to offer the maximum possible of public services to attend the population with the maximum welfare, what is only possible through tax collecting. But the central planner faces a trade-off in which it has to choose the optimal taxation in order to maximize receipt without producing extra regulation for the formal sector of the economy. Besides, the proportion of the number of agents in each activity, formal or informal, is sensitive to the government's choice parameters, such as income tax over firms and workers. Hence, the optimal relation between regulatory and enforcement action by the Government is evaluated considering that the State intends to maximize its income, subject to the foreknown workers’ dynamic in the formal and informal sectors of the economy. The paper is presented as follows. In the next section a literature review on informal labour market is shown. The aim of this section is not only to review this literature but also to posit the contribution of the present paper to the current labour economics literature highlighting its connection to the searching/matching models. In the third section the derivation of the dynamic replicator is used to describe the agents in the labour market. In Section 4, an optimization process of the governmental revenues is made, where the State chooses between augmenting its revenues through an increase in tax or through an increase on the amount of contributing agents. In the last section we conclude the study.

Informality has as main propellers over designed regulatory systems and high tax structures. In the absence of monitoring and enforcement, some firms and individuals find their optimum in regulatory evasion, working outside the strictly legal regime. This, however, is only a second best response, once it implies the loss of some advantages obtained through legality, such as police and court protection and credit access. In order to modelling labour market evolution, we have adopted an evolutionary methodology, in which agents choices are evaluated, may it be workers or firms, considering the pay-offs associated to each strategy: be formal or informal; and the mean pay-off of the rest of the agents’ choices. The use of the dynamic replicator made possible to describe this interaction within the agents, inserting a mass behaviour component to the model. Moreover, the use of evolutionary game theory to describe labour market is relevant due to the scarcity of studies in this area.15 Although searching and matching models are quite relevant to approach the evolution of the labour market, there are no such models framed as formal–informal market. It is surprising since this methodology is able to accommodate a great deal of empirical evidence considering both the cases in which job acceptances are made by employed and unemployed workers – see e.g. Pissarides (1994) and Shimer (2006). Furthermore, the use of the dynamic replicator proved to be useful once it was capable of approaching labour market segmentation in a temporal evolution, starting from a microeconomic point of view of agents’ choice making with few requirements in terms of rationality for agents when compared to those of searching and matching models. Hence from this approach it is possible to delineate optimal policies that foresee the trade-off between tax collecting and incentive creation. We perceived that an increase in taxes, despite producing a direct States’ profit increase, results in the diminution of agents’ incentives of working within legality. By accepting a decrease in taxes, the State may obtain compensation in its income due to the increase in the number of agents that choose the legal operation. This is shown to be the best policy since the Government maximizes its profits in order to provide the greatest quantity of public services possible and also stimulate economic agents to choose legal operation. Thus this paper allows policy making evaluated through labour market temporal evolution, taking into account the strategies that agents will adopt over time.