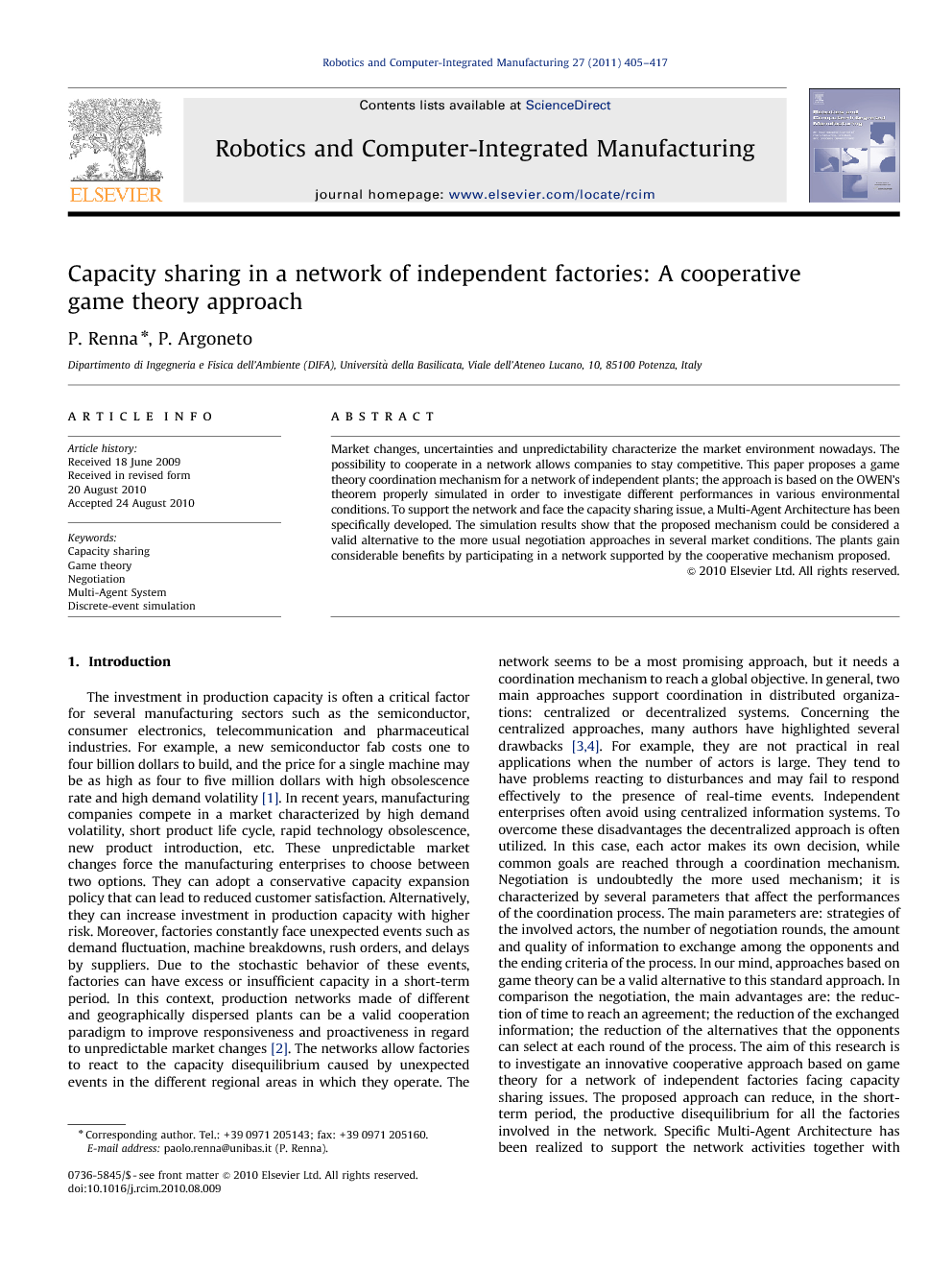 Market changes, uncertainties and unpredictability characterize the market environment nowadays. The possibility to cooperate in a network allows companies to stay competitive. This paper proposes a game theory coordination mechanism for a network of independent plants; the approach is based on the OWEN’s theorem properly simulated in order to investigate different performances in various environmental conditions. To support the network and face the capacity sharing issue, a Multi-Agent Architecture has been specifically developed. The simulation results show that the proposed mechanism could be considered a valid alternative to the more usual negotiation approaches in several market conditions. The plants gain considerable benefits by participating in a network supported by the cooperative mechanism proposed.

The investment in production capacity is often a critical factor for several manufacturing sectors such as the semiconductor, consumer electronics, telecommunication and pharmaceutical industries. For example, a new semiconductor fab costs one to four billion dollars to build, and the price for a single machine may be as high as four to five million dollars with high obsolescence rate and high demand volatility [1]. In recent years, manufacturing companies compete in a market characterized by high demand volatility, short product life cycle, rapid technology obsolescence, new product introduction, etc. These unpredictable market changes force the manufacturing enterprises to choose between two options. They can adopt a conservative capacity expansion policy that can lead to reduced customer satisfaction. Alternatively, they can increase investment in production capacity with higher risk. Moreover, factories constantly face unexpected events such as demand fluctuation, machine breakdowns, rush orders, and delays by suppliers. Due to the stochastic behavior of these events, factories can have excess or insufficient capacity in a short-term period. In this context, production networks made of different and geographically dispersed plants can be a valid cooperation paradigm to improve responsiveness and proactiveness in regard to unpredictable market changes [2]. The networks allow factories to react to the capacity disequilibrium caused by unexpected events in the different regional areas in which they operate. The network seems to be a most promising approach, but it needs a coordination mechanism to reach a global objective. In general, two main approaches support coordination in distributed organizations: centralized or decentralized systems. Concerning the centralized approaches, many authors have highlighted several drawbacks [3] and [4]. For example, they are not practical in real applications when the number of actors is large. They tend to have problems reacting to disturbances and may fail to respond effectively to the presence of real-time events. Independent enterprises often avoid using centralized information systems. To overcome these disadvantages the decentralized approach is often utilized. In this case, each actor makes its own decision, while common goals are reached through a coordination mechanism. Negotiation is undoubtedly the more used mechanism; it is characterized by several parameters that affect the performances of the coordination process. The main parameters are: strategies of the involved actors, the number of negotiation rounds, the amount and quality of information to exchange among the opponents and the ending criteria of the process. In our mind, approaches based on game theory can be a valid alternative to this standard approach. In comparison the negotiation, the main advantages are: the reduction of time to reach an agreement; the reduction of the exchanged information; the reduction of the alternatives that the opponents can select at each round of the process. The aim of this research is to investigate an innovative cooperative approach based on game theory for a network of independent factories facing capacity sharing issues. The proposed approach can reduce, in the short-term period, the productive disequilibrium for all the factories involved in the network. Specific Multi-Agent Architecture has been realized to support the network activities together with a discrete simulation environment in order to highlight the benefits of the proposed approach. The analysis of the performances has been conducted in several dynamic market conditions and compared both with negotiation and a low intelligence based approach with any kind of cooperation. The paper is organized as follows: Section 2 gives a literature review on capacity sharing in a network. The Multi-Agent Architecture is described in Section 3. 4 and 5 present, respectively, the proposed coordination strategy based on the negotiation approach and the game theoretic one. The simulation environment is shown in Section 6. In Section 7 the simulation results are presented and, finally, conclusions and future developments are discussed in Section 8.

This paper proposes a cooperative mechanism based on game theory for capacity sharing in a network of independent plants. The aim of this research is to evaluate the benefits of the proposed approach under variable market conditions, as demand and price, and different network conditions (capacity, productive costs and number of plants involved). The game theory approach is compared to a negotiation approach and a network without cooperation. A MAS was proposed to support the cooperation approaches and a proper simulation environment has been developed to evaluate some important performance measures. Summarizing, the following significant results emerged: • different cooperation strategies lead to different performance measures. In particular, our research highlight that: the customers gain more benefits than the suppliers by using the coordination based on negotiation, while game theory leads to increase the benefits of the involved plants (i.e. profit and logistics management of the network); • the cooperative approaches tested are a real added value for a network of plants. The performance measures have also been evaluated for different network dimensions and the robustness of the proposed approaches has been tested; • the developed simulation environment allows the evaluation of the performance measures in different conditions. For that reason, the research suggests how it is possible evaluate the real added value of the coordination mechanisms in a given network and who, among customers and plants, get the main advantages from them. Future research paths will be twofold: • the dynamicity of the network will be take into account in order to simulate how, a generic plant can decide to leave or joint the network; • the coordination mechanism affecting the supply chain of each single plant will be investigated