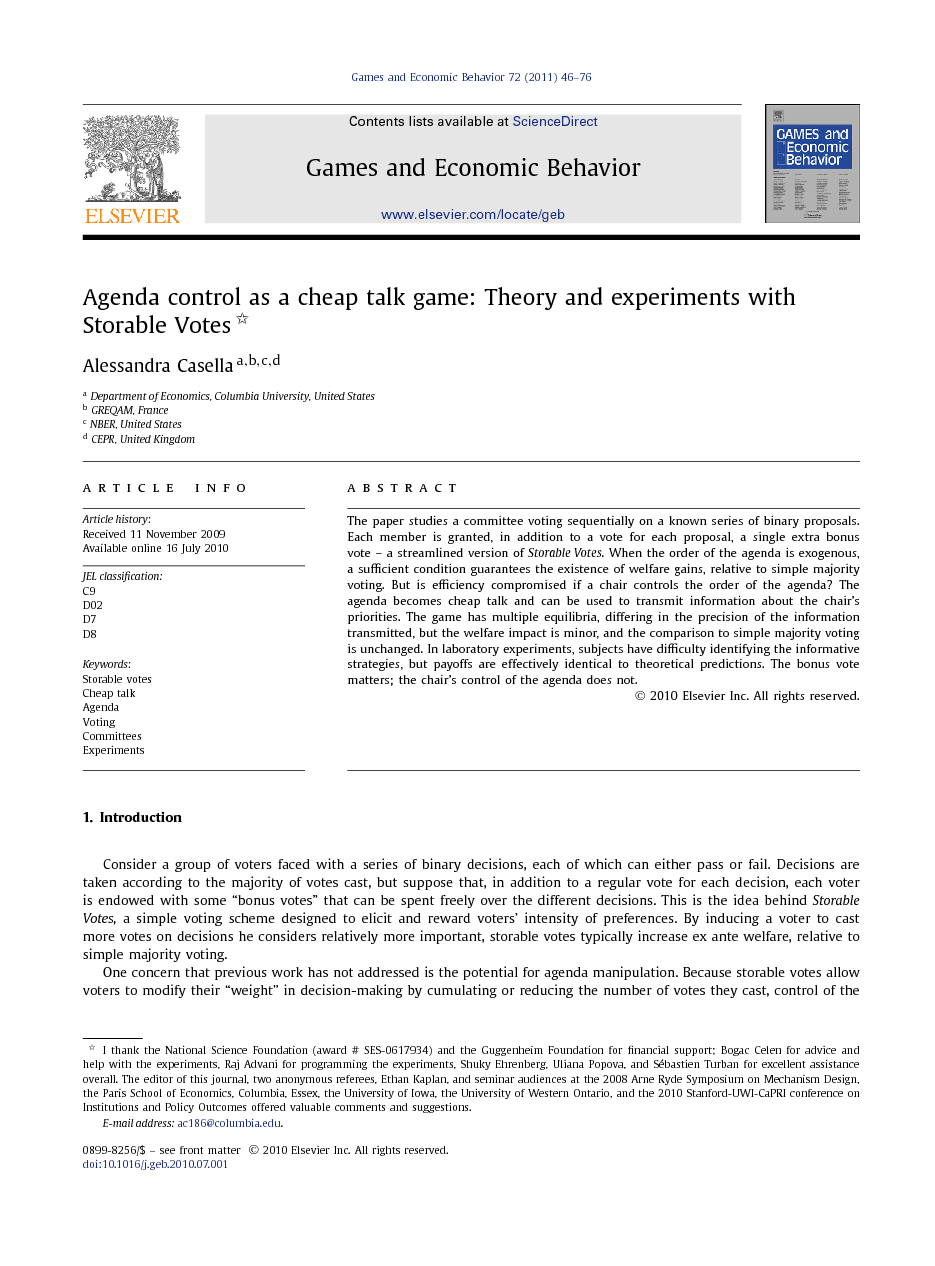 The paper studies a committee voting sequentially on a known series of binary proposals. Each member is granted, in addition to a vote for each proposal, a single extra bonus vote – a streamlined version of Storable Votes. When the order of the agenda is exogenous, a sufficient condition guarantees the existence of welfare gains, relative to simple majority voting. But is efficiency compromised if a chair controls the order of the agenda? The agenda becomes cheap talk and can be used to transmit information about the chairʼs priorities. The game has multiple equilibria, differing in the precision of the information transmitted, but the welfare impact is minor, and the comparison to simple majority voting is unchanged. In laboratory experiments, subjects have difficulty identifying the informative strategies, but payoffs are effectively identical to theoretical predictions. The bonus vote matters; the chairʼs control of the agenda does not.

Storable votes are designed to elicit and reward each voter’s relative intensity of preferences, and thus increase the efficiency of decision-making and the representation of the minority. One important concern, however, is whether the possibility to shift votes across decisions makes storable votes particularly sensitive to agenda manipulation. This paper studies a scenario where the set of decisions to be voted upon is fixed, but the chair controls the order with which they are called to a vote. The game is then transformed into a cheap talk game, where the chair can use the order of the agenda to transmit information about his priorities. In line with the results of the cheap talk literature, several equilibria are possible, distinguished by the precision with which the information is conveyed. When information is transmitted, it discourages the other voters from competing with the chair, and increases the chair’s expected payoff. The effect on the other voters’ utility and aggregate welfare is ambiguous, and in all parameterizations studied quantitatively very small. In a laboratory experiment, subjects have clear difficulties in identifying the informative equilibria: even when the individual chairs’ ordering strategy is consistent, the informational content of the chair’s strategy is not recognized by the other group members. Nevertheless, because bonus votes are disproportionately cast on high intensity proposals, the experimental payoffs are remarkably close to the theoretical predictions, a robustness result already observed in past storable votes experiments with exogenous agendas. In this paper, the main theoretical prediction is that the chair’s control of the order of the agenda should have a negligible effect on the welfare properties of storable votes. And this is indeed the final conclusion of the experiment: the bonus vote does matter; the chair’s control of the agenda does not. It is true, however, that the agenda power granted to the chair is minimal. Even restricting the chair to control the order of the proposals, suppose the order was announced sequentially, after observing how many votes have been cast, as opposed to being chosen once and for all at the beginning of the game. Would results change? Some equilibria of the game studied in this paper remain equilibria here: the babbling equilibrium, where no information is conveyed, the fully informative equilibrium where the chair always calls his highest intensity proposal first, and the partially informative equilibrium where the chair never calls his highest intensity proposal first. In general the other equilibria break down because the uncertainty over the agenda’s order prevents non-chair voters from comparing their intensities over decisions over which the chair’s bonus vote is expected, or not expected; other equilibria may well appear. But the game remains essentially a game of information transmission, an interesting but, in this setting, very subtle role for agenda control. At least in the equilibria that carry over from this paper, the differences in expected outcomes with respect to an exogenous agenda remain minor. How about the more interesting case where the chair controls not only the order but also the content of the agenda? A plausible model would describe voters facing a set of possible decisions, only a subset of which would be voted upon, with the chair choosing sequentially the next decision to be brought to the table. I leave this problem for future work, but some preliminary thoughts suggest that the insights derived from this paper may carry over. The difficult problem facing voters who are not chair is the uncertainty over which decisions will be presented in the future. But this uncertainty is present even when the sequential agenda is exogenous – it is a different problem from protecting oneself from possible manipulations by the chair. Where agenda power matters is once again in granting the chair the possibility to transmit information about his priorities.