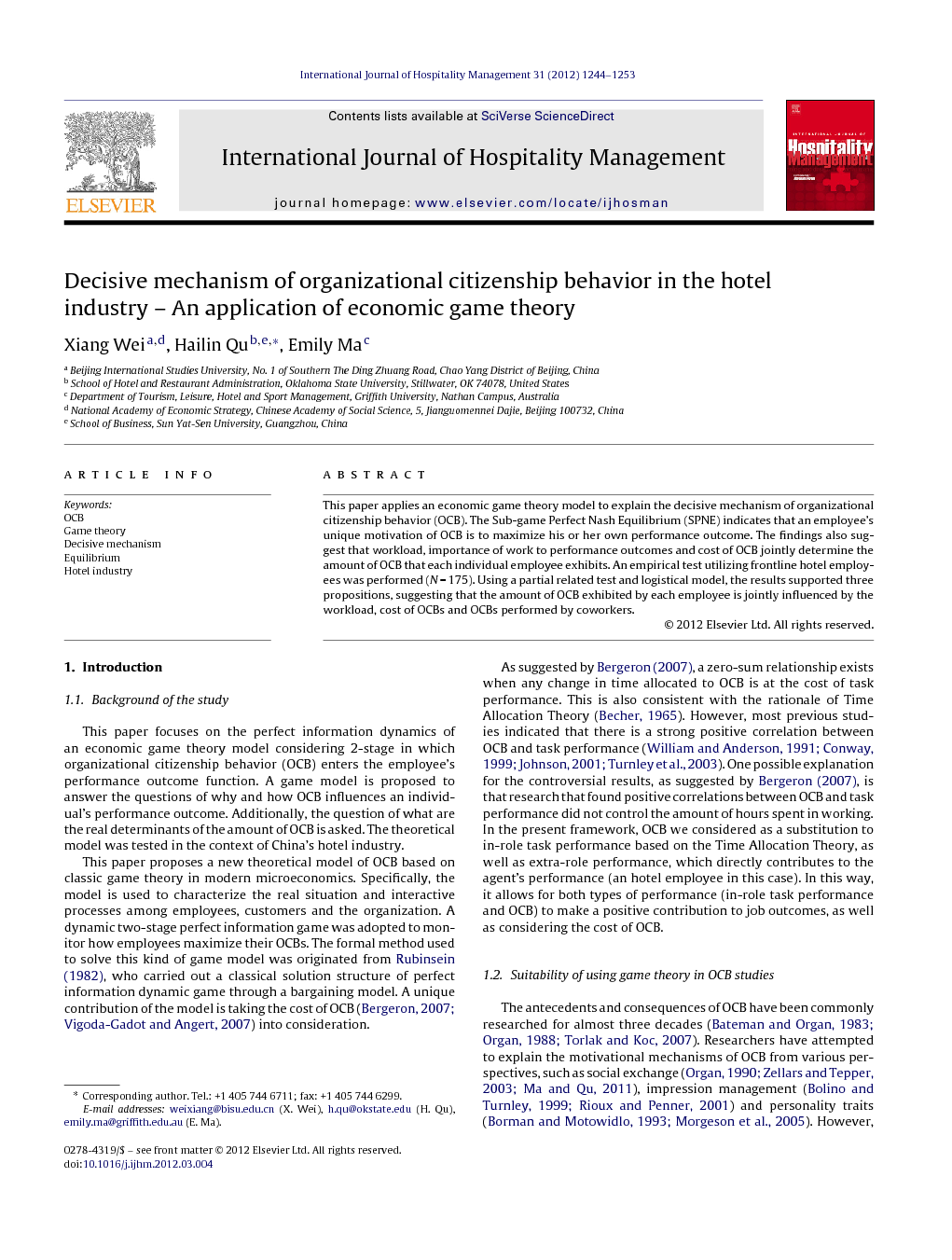 This paper applies an economic game theory model to explain the decisive mechanism of organizational citizenship behavior (OCB). The Sub-game Perfect Nash Equilibrium (SPNE) indicates that an employee's unique motivation of OCB is to maximize his or her own performance outcome. The findings also suggest that workload, importance of work to performance outcomes and cost of OCB jointly determine the amount of OCB that each individual employee exhibits. An empirical test utilizing frontline hotel employees was performed (N = 175). Using a partial related test and logistical model, the results supported three propositions, suggesting that the amount of OCB exhibited by each employee is jointly influenced by the workload, cost of OCBs and OCBs performed by coworkers.

1.1. Background of the study This paper focuses on the perfect information dynamics of an economic game theory model considering 2-stage in which organizational citizenship behavior (OCB) enters the employee's performance outcome function. A game model is proposed to answer the questions of why and how OCB influences an individual's performance outcome. Additionally, the question of what are the real determinants of the amount of OCB is asked. The theoretical model was tested in the context of China's hotel industry. This paper proposes a new theoretical model of OCB based on classic game theory in modern microeconomics. Specifically, the model is used to characterize the real situation and interactive processes among employees, customers and the organization. A dynamic two-stage perfect information game was adopted to monitor how employees maximize their OCBs. The formal method used to solve this kind of game model was originated from Rubinsein (1982), who carried out a classical solution structure of perfect information dynamic game through a bargaining model. A unique contribution of the model is taking the cost of OCB (Bergeron, 2007 and Vigoda-Gadot and Angert, 2007) into consideration. As suggested by Bergeron (2007), a zero-sum relationship exists when any change in time allocated to OCB is at the cost of task performance. This is also consistent with the rationale of Time Allocation Theory (Becher, 1965). However, most previous studies indicated that there is a strong positive correlation between OCB and task performance (William and Anderson, 1991, Conway, 1999, Johnson, 2001 and Turnley et al., 2003). One possible explanation for the controversial results, as suggested by Bergeron (2007), is that research that found positive correlations between OCB and task performance did not control the amount of hours spent in working. In the present framework, OCB we considered as a substitution to in-role task performance based on the Time Allocation Theory, as well as extra-role performance, which directly contributes to the agent's performance (an hotel employee in this case). In this way, it allows for both types of performance (in-role task performance and OCB) to make a positive contribution to job outcomes, as well as considering the cost of OCB. 1.2. Suitability of using game theory in OCB studies The antecedents and consequences of OCB have been commonly researched for almost three decades (Bateman and Organ, 1983, Organ, 1988 and Torlak and Koc, 2007). Researchers have attempted to explain the motivational mechanisms of OCB from various perspectives, such as social exchange (Organ, 1990, Zellars and Tepper, 2003 and Ma and Qu, 2011), impression management (Bolino and Turnley, 1999 and Rioux and Penner, 2001) and personality traits (Borman and Motowidlo, 1993 and Morgeson et al., 2005). However, very few studies examined OCB motivation from the economic theory perspectives, for example the classic game theory perspective. Several important considerations warrant the analysis of OCB using game theory. First of all, game theory in modern economy is the best tool to tackle interactive processes with interdependent players (Nolan and Adam, 2007 and Song, 2008). OCB is the type of behavior that falls into this category, as employees who perform OCB are interdependent and interactive with his or her co-workers, customers and the organization (Lambert, 2000 and Bell and Mengüç, 2002). The dimensionality of OCB also indicates this feature. For example, according to Organ's Five-dimensional Framework of OCB (1988), both courtesy and sportsmanship involve interactions between the employee and his or her co-workers (Morrison, 1994), while civic virtue represents the interaction between an individual employee and the organization (Podsakoff et al., 2000). Second, recent studies revealed that OCBs can be viewed as reflective behaviors. This is due to the fact that employees’ OCB performance reflects the degree of an employee's Perceived Organizational Support (POS) as well as the OCBs that employee received from others (Organ and Ryan, 1995, Moorman et al., 1998, Lambert, 2000, Moorman and Harland, 2002 and Vigoda-Gadot and Angert, 2007). The interactions and interrelationships involved in this process make the introduction of an interdependent game model necessary. Third, one basic premise of the OCB theory is that an employee will engage in OCB when he or she perceives that their employment relationship is based on social exchange (Organ, 1990 and Moorman, 1991). Another premise of OCB theory is that OCB is a reciprocate behavior (Organ, 1988, Organ, 1990, Rousseau, 1990 and Lambert, 2000). Both premises reveal that OCB is an interactive process. However, both of these two premises are unable to demonstrate the decisive mechanism of OCB mathematically, which clearly shows the interactive path from the determinants of OCB to actual OCB performance. Fortunately, game theory is a useful mathematic tool to determine the decisive path of interactive behaviors. Therefore, the main purpose of this paper is to highlight the major determinants of OCB. To deduce the decisive mechanism of OCB, an optimization solution of individual performance function was made with OCB to figure out how much OCB is decided by individual's dynamic game interaction.