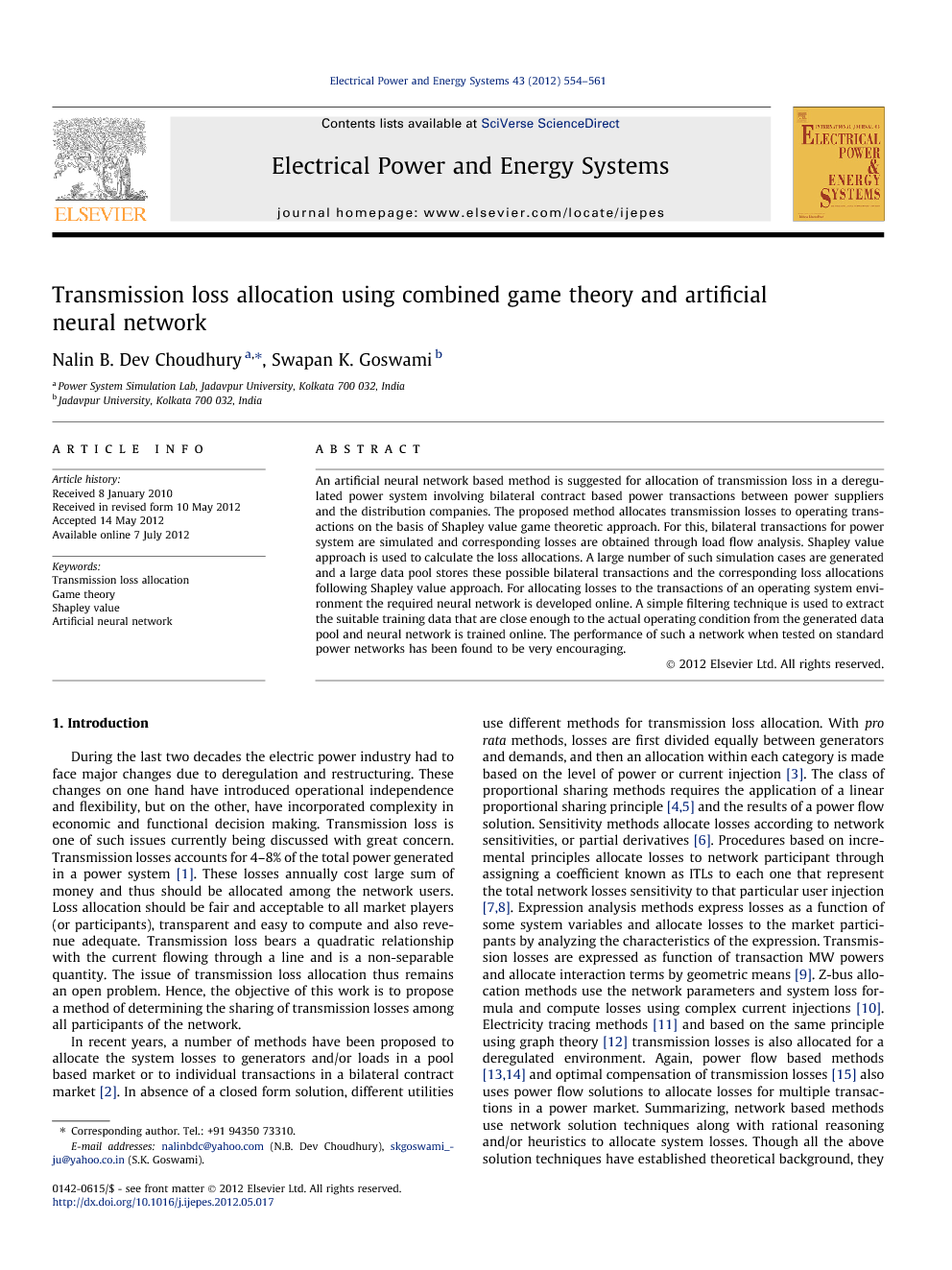 An artificial neural network based method is suggested for allocation of transmission loss in a deregulated power system involving bilateral contract based power transactions between power suppliers and the distribution companies. The proposed method allocates transmission losses to operating transactions on the basis of Shapley value game theoretic approach. For this, bilateral transactions for power system are simulated and corresponding losses are obtained through load flow analysis. Shapley value approach is used to calculate the loss allocations. A large number of such simulation cases are generated and a large data pool stores these possible bilateral transactions and the corresponding loss allocations following Shapley value approach. For allocating losses to the transactions of an operating system environment the required neural network is developed online. A simple filtering technique is used to extract the suitable training data that are close enough to the actual operating condition from the generated data pool and neural network is trained online. The performance of such a network when tested on standard power networks has been found to be very encouraging.

During the last two decades the electric power industry had to face major changes due to deregulation and restructuring. These changes on one hand have introduced operational independence and flexibility, but on the other, have incorporated complexity in economic and functional decision making. Transmission loss is one of such issues currently being discussed with great concern. Transmission losses accounts for 4–8% of the total power generated in a power system [1]. These losses annually cost large sum of money and thus should be allocated among the network users. Loss allocation should be fair and acceptable to all market players (or participants), transparent and easy to compute and also revenue adequate. Transmission loss bears a quadratic relationship with the current flowing through a line and is a non-separable quantity. The issue of transmission loss allocation thus remains an open problem. Hence, the objective of this work is to propose a method of determining the sharing of transmission losses among all participants of the network. In recent years, a number of methods have been proposed to allocate the system losses to generators and/or loads in a pool based market or to individual transactions in a bilateral contract market [2]. In absence of a closed form solution, different utilities use different methods for transmission loss allocation. With pro rata methods, losses are first divided equally between generators and demands, and then an allocation within each category is made based on the level of power or current injection [3]. The class of proportional sharing methods requires the application of a linear proportional sharing principle [4] and [5] and the results of a power flow solution. Sensitivity methods allocate losses according to network sensitivities, or partial derivatives [6]. Procedures based on incremental principles allocate losses to network participant through assigning a coefficient known as ITLs to each one that represent the total network losses sensitivity to that particular user injection [7] and [8]. Expression analysis methods express losses as a function of some system variables and allocate losses to the market participants by analyzing the characteristics of the expression. Transmission losses are expressed as function of transaction MW powers and allocate interaction terms by geometric means [9]. Z-bus allocation methods use the network parameters and system loss formula and compute losses using complex current injections [10]. Electricity tracing methods [11] and based on the same principle using graph theory [12] transmission losses is also allocated for a deregulated environment. Again, power flow based methods [13] and [14] and optimal compensation of transmission losses [15] also uses power flow solutions to allocate losses for multiple transactions in a power market. Summarizing, network based methods use network solution techniques along with rational reasoning and/or heuristics to allocate system losses. Though all the above solution techniques have established theoretical background, they lack of solid economical foundation for the allocation of losses. In recent years, different allocation schemes have been formulated based on the natural economic use of the transmission system [16]. Game theory provides well-behaved solution mechanisms for resolving the conflicts among players in a competitive environment [17]. In particular, cooperative game theory is a very convenient tool to solve cost allocation problem [16], [18] and [19]. Game theory is used for solving different deregulated power system problems in the literature [20], [21], [22] and [23]. Popular game theoretic approaches used in power engineering problems are negotiation set, core, the kernel, nucleolus, Shapley values, Aumann–Shapley value, etc. [24] and [25]. Among these methods, the Shapley value approach proposed by Shapley [26] is very straight forward, easy to implement and thus seems to be more appealing to the power engineering professionals. The major problem with any game theory based allocation method is the volume of data (and hence the computational requirement) needed to arrive at a solution making it a difficult approach for real time implementation. Thus, loss allocation problem can be categorized as a problem that is difficult to solve. Artificial intelligence methods, more specifically, the artificial neural network are appropriate tool for handling such problem. The motivation of this work is to offer an alternative scheme of loss allocation using solved load flow methods with game theoretic approach and artificial neural network (ANN) and which will allocate losses with an economically viable situation. The proposed method is presented briefly in the next section, followed by the details of methodology used for Shapley values and ANN. Section 3 presents the system description of the networks where the proposed methods are tested and loss allocation results obtained using IEEE standard bus system are presented in Section 4.

A combined neural network and game theoretic approach has been presented for allocation of transmission losses in a deregulated power market. Test results show that neural network can generate game theoretic allocations within acceptable accuracy and time. Game theory based loss allocation are considered to be rational while obtaining game theoretic allocation is computationally prohibitive and not suitable for real time applications. ANN implementation thus, can be a suitable alternative for real time application. Neural network being a general purpose classifier can be trained to allocate losses following the allocation strategies of other loss allocation methods as well. For practical implementation the allocation tool must be capable of generating accurate allocation in cases of network configuration changes as well. The proposed method has this capability. Currently, the authors are in the process of implementing such variations.