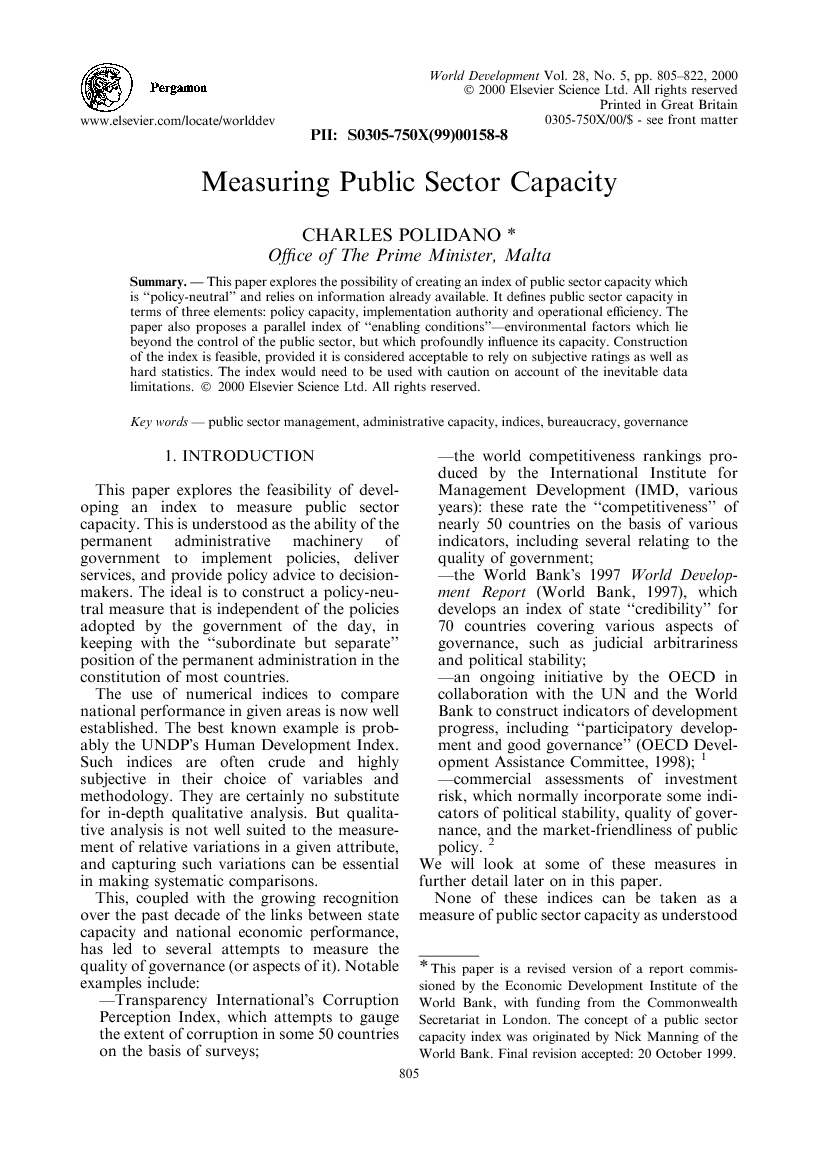 This paper explores the possibility of creating an index of public sector capacity which is “policy-neutral” and relies on information already available. It defines public sector capacity in terms of three elements: policy capacity, implementation authority and operational efficiency. The paper also proposes a parallel index of “enabling conditions”—environmental factors which lie beyond the control of the public sector, but which profoundly influence its capacity. Construction of the index is feasible, provided it is considered acceptable to rely on subjective ratings as well as hard statistics. The index would need to be used with caution on account of the inevitable data limitations.

This paper explores the feasibility of developing an index to measure public sector capacity. This is understood as the ability of the permanent administrative machinery of government to implement policies, deliver services, and provide policy advice to decision-makers. The ideal is to construct a policy-neutral measure that is independent of the policies adopted by the government of the day, in keeping with the “subordinate but separate” position of the permanent administration in the constitution of most countries. The use of numerical indices to compare national performance in given areas is now well established. The best known example is probably the UNDP’s Human Development Index. Such indices are often crude and highly subjective in their choice of variables and methodology. They are certainly no substitute for in-depth qualitative analysis. But qualitative analysis is not well suited to the measurement of relative variations in a given attribute, and capturing such variations can be essential in making systematic comparisons. This, coupled with the growing recognition over the past decade of the links between state capacity and national economic performance, has led to several attempts to measure the quality of governance (or aspects of it). Notable examples include: —Transparency International’s Corruption Perception Index, which attempts to gauge the extent of corruption in some 50 countries on the basis of surveys; —the world competitiveness rankings produced by the International Institute for Management Development (IMD, various years): these rate the “competitiveness” of nearly 50 countries on the basis of various indicators, including several relating to the quality of government; —the World Bank’s 1997 World Development Report(World Bank, 1997), which develops an index of state “credibility” for 70 countries covering various aspects of governance, such as judicial arbitrariness and political stability; —an ongoing initiative by the OECD in collaboration with the UN and the World Bank to construct indicators of development progress, including “participatory development and good governance” (OECD Development Assistance Committee, 1998);1 —commercial assessments of investment risk, which normally incorporate some indicators of political stability, quality of governance, and the market-friendliness of public policy.2 We will look at some of these measures in further detail later on in this paper. None of these indices can be taken as a measure of public sector capacity as understood here, though all capture aspects of it. Transparency International’s corruption index is very specific in focus. The others are too broad, particularly in making no clear-cut distinction between “political” questions such as the stability of governments or the pursuit of particular policies, and the capacity of the administrative apparatus. Many attempts to define or measure the quality of governance have at their heart a set of policy prescriptions relating to market liberalization, political decentralization, and so on. There is hence scope for the development of a “policy-neutral” index of public sector capacity which would focus on the permanent administrative machinery of the state, irrespective of what policies are being followed by the elected government. Such an index would reflect and reinforce the growing realization that policy changes on their own are not enough to bring about sustained improvements in national competitiveness; and that the policy changes can fail unless attention is paid to the capacity of the institutions that must carry them out Lamb, 1987, World Bank, 1997 and Klitgaard, 1997. This realization is expressed in the public sector reforms which are currently being undertaken by a large number of countries all over the world, often with donor support. But these reform projects can easily become inward-looking—preoccupied with implementing organizational and procedural changes, and counting implementation as success irrespective of whether or not it actually brings about better government. An index of public sector capacity might help concentrate the minds of governments more on the outcomes of reform, as opposed to the outputs (see Polidano, Hulme & Minogue, 1998). It might also concentrate the minds of external aid donors. For it is now well documented that donors themselves can inadvertently damage the capacity of the very governments they are trying to assist Hulme and Sanderatne, 1995, Cohen, 1992, Harrigan, 1998 and Polidano and Hulme, 1999. The extent to which an index can change behavior, as opposed to simply giving countries at the bottom of the ranking table a poor image, will no doubt be much debated. But the potential should not be too readily dismissed. The corruption index developed by Transparency International has had a profound impact, in spite of concerns about the methodology it uses: Almost single-handedly it [the index] has raised awareness internationally to the prevalence of corruption in many countries and regions of the world, and it has sensitized many to the significant variations across settings. Arguably, it has even prompted some governments to take some actions … in response to concerns about the bad “PR” that their country index ratings brought them. It is at any rate clear that many leaders now follow the … ratings rather closely (Kaufman, 1998). My aim in this paper is not to construct a fully-fledged index: I do no more than present rudimentary data for a small number of countries. I am more concerned with laying down a solid conceptual foundation. In the process I will draw extensively on the political science and public administration literature. There is an important body of work on the capacity of government, especially in political science, and any attempt to measure the quality of governance without due regard to this literature would be all the poorer for it.

To recapitulate briefly, this paper has sought to explore whether and how an index of public sector capacity could be set up. It finds that enough data exist for such an index to be constructed. It proposes that there should be two indices side by side: one measuring public sector capacity in terms of the three elements of policy capacity, implementation authority, and operational efficiency; and another to indicate the strength of key socio-political and economic factors which exert an influence on that capacity. Such an index would naturally have limitations. Among other things, implementation authority can only be measured over a limited spread of policy sectors: ideally, as many sectors as possible would be taken into account to guard against the possibility of sectoral variations within each country. The available measures for operational efficiency lack precision. In addition, there is substantial reliance on “soft” data, many of which are biased toward the needs of business investors. In many countries, for instance, it is the poor rather than foreign investors who feel the brunt of corruption—perhaps because they are less likely to complain or to have backers in high places. This may lead to its prevalence being understated in a survey of business executives. Because of such limitations, the data would need to be used with caution. On the other hand, any attempt to assess or compare public sector capacity must rely on subjective assessments of qualitative aspects of capacity. The data sources reviewed above represent an attempt to do so systematically. The companies which compile the assessments have a commercial interest in ensuring that their data are considered to be dependable. Nor should an index such as this be expected to give a complete picture of public sector capacity. No attempt to assess or compare public sector capacity can do so, not least because there will always be disagreement over what that full picture should include. The real issue is whether the index can reflect significant variations in public sector capacity in a reasonably fair manner on the basis of the data available. It is this which potential users of the index would need to establish for themselves. There is probably substantial scope for refinement in the structure and methodology of the index as proposed here. And questions will always remain about the reliability of the data, given the use of “soft” information. A full-scale trial run covering as many countries as possible may well be the best way to determine whether or not the index is worth proceeding with.