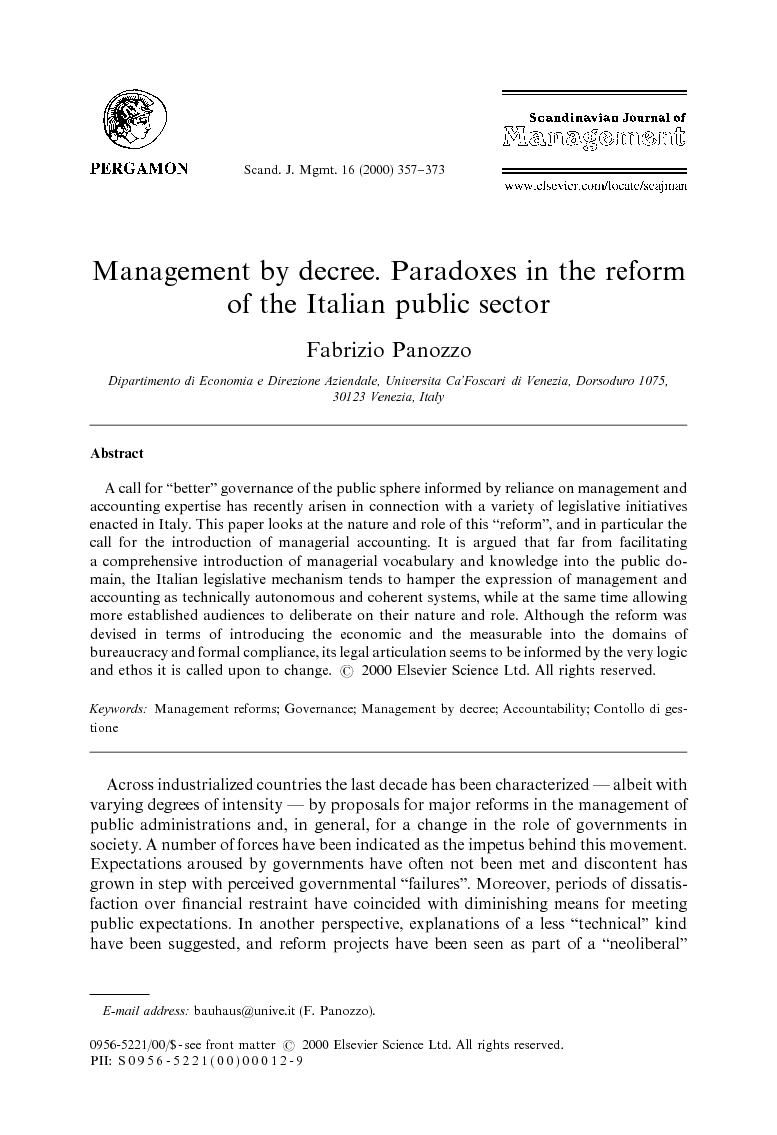 A call for “better” governance of the public sphere informed by reliance on management and accounting expertise has recently arisen in connection with a variety of legislative initiatives enacted in Italy. This paper looks at the nature and role of this “reform”, and in particular the call for the introduction of managerial accounting. It is argued that far from facilitating a comprehensive introduction of managerial vocabulary and knowledge into the public domain, the Italian legislative mechanism tends to hamper the expression of management and accounting as technically autonomous and coherent systems, while at the same time allowing more established audiences to deliberate on their nature and role. Although the reform was devised in terms of introducing the economic and the measurable into the domains of bureaucracy and formal compliance, its legal articulation seems to be informed by the very logic and ethos it is called upon to change.

A tentative analysis of the attempt to introduce a basic managerial device into the Italian public administration has been conducted in order to emphasize that, within rational-legal institutional systems, the study of public sector reform cannot disregard the role of the legal framework in defining the domain of the suitable and the possible. In the Italian case, key concepts such as “economic accountability”, “effectiveness” and above all “managerial control” appear to be enmeshed within the constraints that are proper to the legislative instrument and to the juridical language itself. In fact, the nature and role of controllo di gestione as presented in Italian law reveals a somewhat problematic relationship with the way they are conceived in business practice and in academic research. Far from facilitating a comprehensive introduction of managerial vocabulary and knowledge into the public domain (as has been the case in other western economies, for instance) the Italian reform carefully disciplines the nature and mechanisms of the managerial reform by way of the legislative mechanism. The legislative form inhibits the integral expression of management and accounting as technically autonomous and coherent systems for the governance of complex organizations, while allowing more established audiences to intervene in the discussion of “managerial” issues at the same time. The actual implementation of the reform, which is still at the stage of “permanent” experimentation, is embedded in a process in which all the relevant actors (local and central governments, accounting judges and even the Constitutional Court) have engaged in sense-making exercises in order to determine the “real” meaning — and thus the actual role and impact — of the managerial terminology introduced into the law as change mechanisms. This process of diffusion of the managerial discourse has important implications, since it tends to redistribute the authority to assign what may look like technical problems to agencies and professions, primarily in the legal/juridical sector, which tend to view them from an angle quite different from the one where they originally arose. In this perspective it is not surprising that a number of language games have been activated around the concepts of “accountability”, “control” and “efficiency”, mainly in an attempt to regulate and clarify their impact. Since managerial accounting is enforced by law, it invariably tends to be reinterpreted as an administrative procedure requiring precision and certainty in order to be completed. This in turn leads to the “normalization” of controllo di gestione by making sense of it within the existing framework of controls and regulatory practices. In this context, we can see that claims to the technical neutrality of accounting are being used chiefly as rhetorical devices, since it is obvious from attempts to control its full expression and thus preserve the status quo. Not surprisingly these conclusions are in line with the findings of other analyses of the actual impact of accounting innovations in the Italian public sector. Mussari's final comments on the “new” Italian municipal auditing are illustrative of the complexities involved in reform projects “…the Auditors were expected to break the old state of affairs by promoting a ‘new’ culture within municipalities. On the basis of the audit reports considered, the auditors seem to use the bureaucratic and formal culture which pervades municipalities as an excuse to motivate the status quo” (Mussari, 1995, p. 138). The main paradox about this sort of “management by decree” is that the adoption of contingent, flexible and goal-driven managerial instruments and structures in public sector organizations is promoted by formal, centralized and bureaucratic enforcement. Such a situation accounts for the contradictory demands that are imposed on managerial accounting within the reform of the Italian public sector. On the other hand, it is said to be an “adaptive” mechanism which must be tailored to fit the characteristics of each individual organization in order to be effective. On the other, since it is enforced by law, the introduction of managerial accounting tends to become a matter of compliance rather than a mechanism for enabling change. Although devised as a way of introducing the logic of the factual and the measurable into the domains to bureaucracy and formal compliance, the legal enunciation of the reform appears to be informed by the very logic and ethos it is supposed to be transforming.