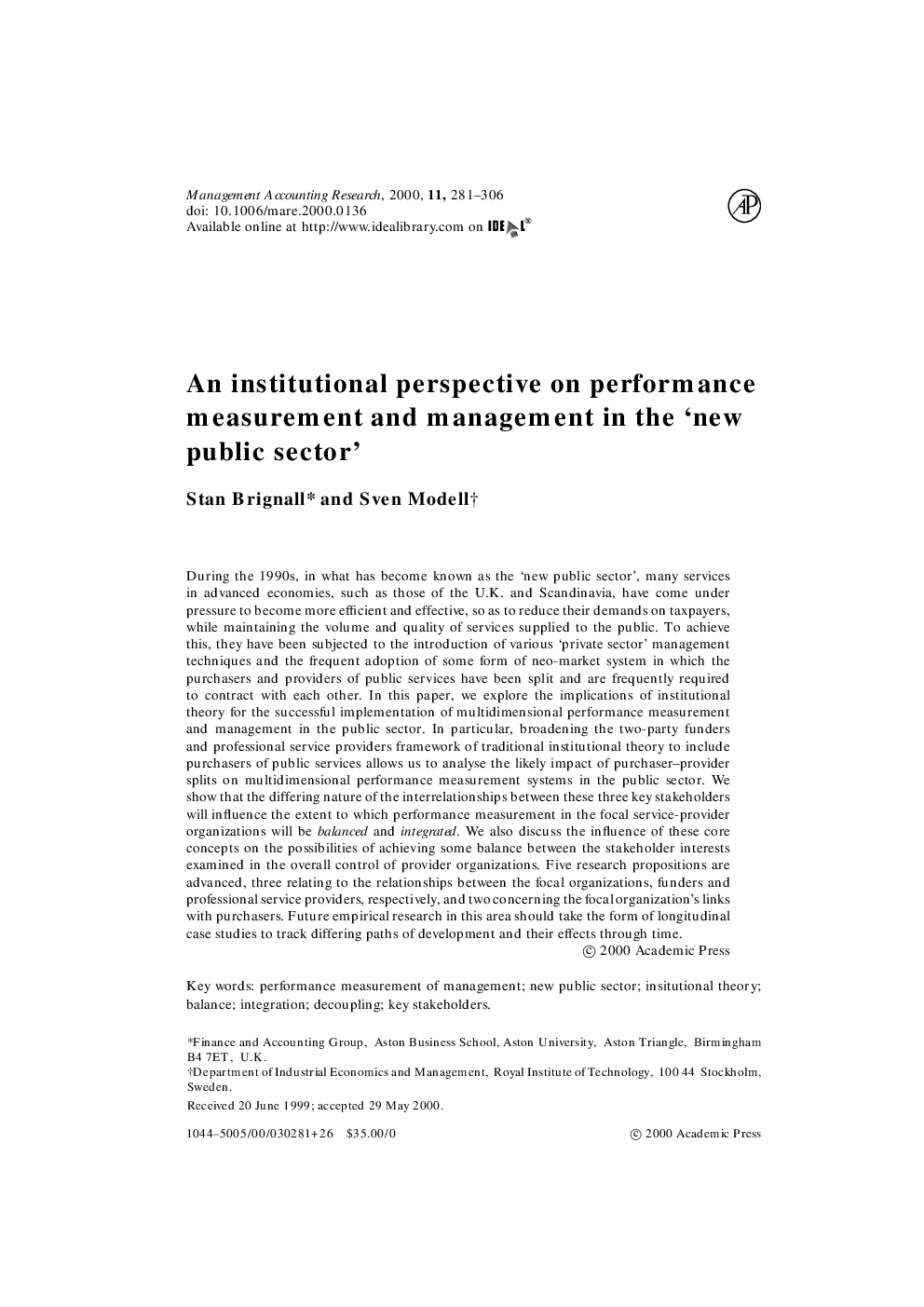 During the 1990s, in what has become known as the ‘new public sector’, many services in advanced economies, such as those of the U.K. and Scandinavia, have come under pressure to become more efficient and effective, so as to reduce their demands on taxpayers, while maintaining the volume and quality of services supplied to the public. To achieve this, they have been subjected to the introduction of various ‘private sector’ management techniques and the frequent adoption of some form of neo-market system in which the purchasers and providers of public services have been split and are frequently required to contract with each other. In this paper, we explore the implications of institutional theory for the successful implementation of multidimensional performance measurement and management in the public sector. In particular, broadening the two-party funders and professional service providers framework of traditional institutional theory to include purchasers of public services allows us to analyse the likely impact of purchaser–provider splits on multidimensional performance measurement systems in the public sector. We show that the differing nature of the interrelationships between these three key stakeholders will influence the extent to which performance measurement in the focal service-provider organizations will be balanced and integrated. We also discuss the influence of these core concepts on the possibilities of achieving some balance between the stakeholder interests examined in the overall control of provider organizations. Five research propositions are advanced, three relating to the relationships between the focal organizations, funders and professional service providers, respectively, and two concerning the focal organization’s links with purchasers. Future empirical research in this area should take the form of longitudinal case studies to track differing paths of development and their effects through time.

This paper has attempted to provide an alternative perspective on multidimensional PM, grounded in institutional theory, to the approach dominating the growing literature on this topic. The relevance of doing so in the context of the ‘new public sector’ is justified by the complex interrelationships between multiple stakeholders and the intensely political nature of decision-making in public sector organizations. Recognizing the institutional pressures associated with the three groups of stakeholders considered in this paper provides an explanation for the actual integration and balance between different performance measures within organizations providing public services. In this respect, our approach goes beyond the relatively simplistic assumptions underpinning much literature on multidimensional PM, which has typically ignored or regarded as largely unproblematic the institutional and political processes inherent in systems implementation. It is hoped that the research propositions advanced in this paper may be a useful starting point for empirical inquiries examining the dynamics inherent in the interplay between the three stakeholder interests.However, a few remarks regarding our use of institutional perspectives may be worth considering for students setting out to test and refine our emerging institutional theory of PMS design and implementation. While institutional theorists have tended to emphasize the adaptive nature of organizational behaviour, we acknowledge the need to complement this with a viewof management as an intentional and pro-active agent. However, it is important to clearly distinguish managerial choice from organizational change. As recent advances in institutional theory illustrate, change and stability co-exist and frequently give rise to organizational paradoxes (Czarniawska and Sev´on, 1996). One such paradox hinted at in this paper is that pro-active managerial attempts to balance conflicting stakeholder interests through de-coupling (as reflected by Propositions 3 and 5) may induce organizational stability rather than change, as this offers an opportunity to reduce or divert claims for more far-reaching changes, while allowing management to appear to engage in serious change efforts. The rationale for this is that de-coupling may be seen as an attempt to maintain some rough equilibrium between inconsistent norms (Meyer, 1996). In contrast, the scope for such ‘hypocritical’ managerial tactics is likely to be more limited where change is imposed on organizations in a more coercive manner (as reflected by Propositions 1, 2 and 4). In such circumstances, shifting PM practices may seem to follow a more deterministic model of change, which management may draw on to justify change initiatives (e.g. motivating new PM practices as a ‘necessary evil’). We would argue that studies of managerial choice constitute a useful starting point for analysing how PM practices change in highly institutionalized settings, such as the public sector (cf. Abernethy and Chua, 1996). To unravel paradoxes such as those outlined above, empirical inquiries should combine this with an analysis ofinstitutional constraints, but might also need to extend the discussion to consider the inherently inter-subjective aspects associated with different actors’ interpretations of stability and change in PM practices. A limitation of our discussion is that little attention is paid to the formation and interpretation of managerial choices in line with contemporary social constructivist thought (Czarniawska and Sev´on, 1996). Future empirical investigations should venture further to gain a deeper understanding of the rationales for managerial tactics, and so enrich the analysis of their interplay with the organization’s institutional environment. Managerial choices are not always explicit (they may even be subconscious), and studying these may require a view ofPerformance Measurement and Management in the New Public Sector 301 management as a less detached actor, deeply involved in the continuous process of translating ideas into action and back into ideas, some of which become embedded in the organizational fabric and thus institutionalized (Czarniawska and Joerges, 1996). Managerial responses to changes in the institutional environment follow a cyclical pattern (Beckert, 1999; Crossan et al., 1999), where managers themselves influence the process of institutionalization through their interactions with such environments. An interpretive and preferably longitudinal case study approach would thus seem to be a useful research strategy, adding ‘flesh’ to the theoretical ‘skeleton’ advanced in this paper. Another reason for adopting a case-study approach is that the core concepts of integration and balance in PMS design and use are complex phenomena that may require intensive studies of the intended and actual use of various performance measures for different purposes. This probably defies traditional empirical tests exclusively based on statistical methods. Even though it may be possible to develop quantifiable constructs reflecting the balance and integration between different performance dimensions, these concepts are likely to be deeply embedded in the context of PMSs. It has been argued that the properties of institutional environments are difficult to define a priori and need to be identified through close empirical examination (DiMaggio and Powell, 1983). A fruitful research strategy in this respect might be to compare changes in PM usein specific decision-making contexts pertaining to different groups of stakeholders, such as pricing and contract negotiation, reporting to funding bodies and disclosure of information to groups of professional staff, as well as adopting a more holistic approach.