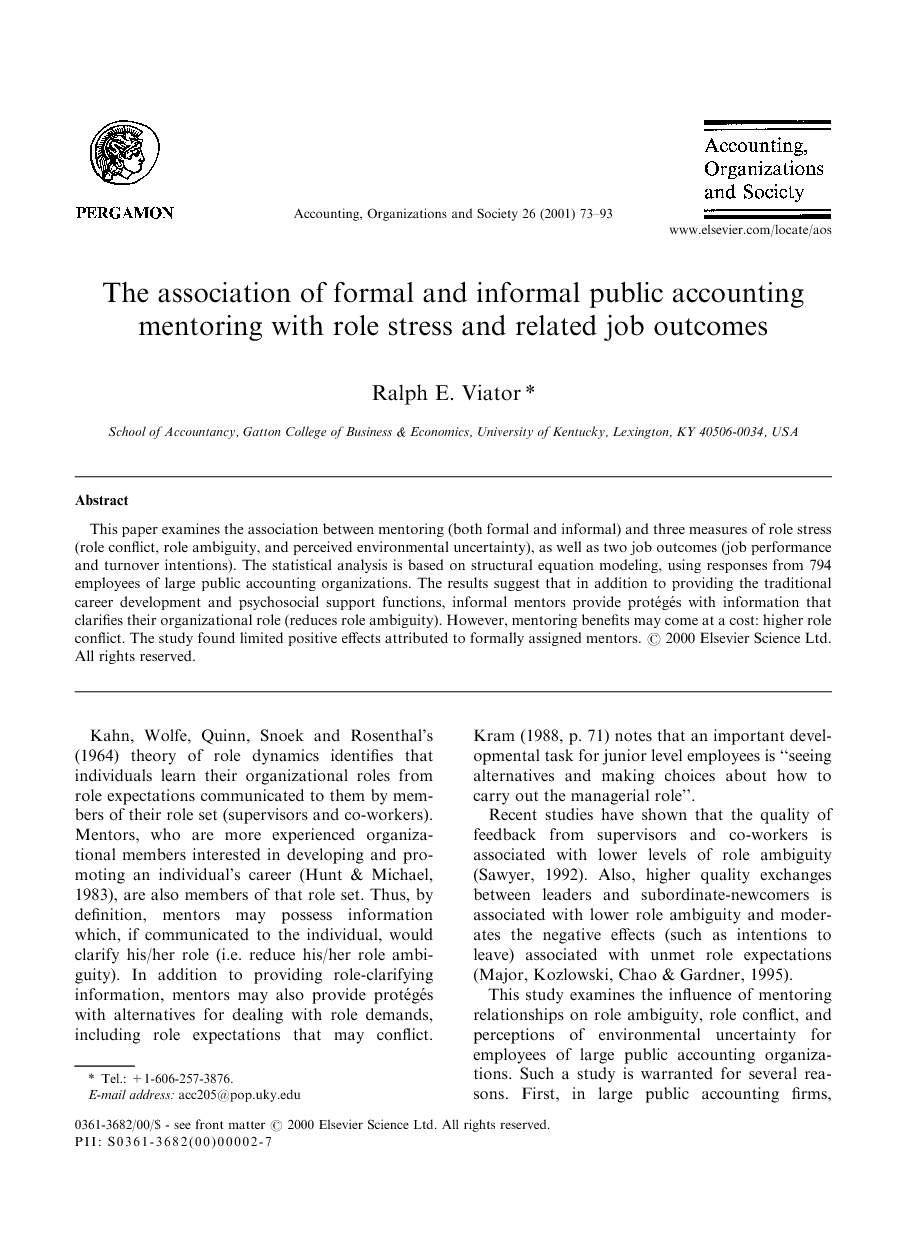 This paper examines the association between mentoring (both formal and informal) and three measures of role stress (role conflict, role ambiguity, and perceived environmental uncertainty), as well as two job outcomes (job performance and turnover intentions). The statistical analysis is based on structural equation modeling, using responses from 794 employees of large public accounting organizations. The results suggest that in addition to providing the traditional career development and psychosocial support functions, informal mentors provide protégés with information that clarifies their organizational role (reduces role ambiguity). However, mentoring benefits may come at a cost: higher role conflict. The study found limited positive effects attributed to formally assigned mentors.

One of the consistently significant relationships found in this study is that employees who had an informal mentor experienced lower levels of role ambiguity.16 The results of this study agree with Ostroff and Kozlowski (1993) who found evidence that mentors are a source for organizational information. In that study, organizational newcomers who had a mentor learned more about organizational issues and practices, compared to nonmentored newcomers. The results reported in the current study extend prior research by demonstrating that informal mentors are associated with the acquisition of role information across multiple employee organizational levels. Such information is critical given the role expectations placed on employees in large public accounting firms. To a lesser extent, informal mentors were associated with lower levels of perceived uncertainty regarding the work environment, but the results were not robust across multiple employee organizational levels. The analysis of mentoring functions and role stress suggested that two specific mentoring functions provided by informal mentors are associated with lower role ambiguity: career-related mentoring (primarily for senior accountants), and protection and assistance (primarily for senior managers). Surprisingly, neither social support (where mentors and protégés discuss concerns and share experiences) nor role modeling (where protégés learn by observing mentors) was associated with variations in role ambiguity. This lack of association is counter to that proposed by Ragins (1997, p. 506), who theorized that because social support facilitates protégé organizational socialization and effectiveness in professional roles, the function should have an impact on variables such as job stress and role stress. As theorized in this paper, mentors may assist employees in managing and coping with certain kinds of role conflict. However, given the inconsistent results found regarding role conflict, alternative views of mentoring are needed. Townley (1994) and Covaleski, Dirsmith, Helan and Samuel (1998) offer such an alternative perspective of mentoring based on the work of Michel Foucault. Foucauldian theory identifies ‘technologies of the self,” such as self-examination and confession, as mechanisms for affirming and transforming self-identity (Foucault, 1983 and Foucault, 1988). From this Foucauldian perspective, mentoring can be seen as an “avowal” process: protégés verbalize intimate details of their lives to mentors, and mentors interpret these intimacies and provide guidance. However, verbalizations offered by mentors, who tend to be at higher levels in the firm, are likely to be based on organizational norms and values (Covaleski, Dirsmith, Heian and Samuel, 1998 and Townley, 1993). Such an avowal process may be the seat of potential conflict. If the values and aspirations held by protégés are different from those affirmed by higher-ranking mentors, then protégés are likely to experience role conflict. Kahn et al. (1964) define such potential role conflict as person–role conflict, in which role requirements violate the needs, values, or capacities of the focal person. Because mentoring relationships are more intimate than other nonmentoring work relationships, the “confessional” aspect of mentoring is likely to reveal divergent goals and values when they exist. In the current study, female managers who had an informal mentor reported higher levels of role conflict, compared to female managers without an informal mentor. This occurred in sharp contrast with male managers and female senior managers, for whom having a mentor was associated with lower role conflict. It may be that female managers, who are in a period of passage from senior accountant to senior manager, experience role conflict and seek out informal mentors to guide them through this passage. However, it is also possible that the guidance which female managers receive from mentors (who are likely to be male senior managers or partners) tends to conflict with the personal goals and values held by female managers (whose median age in this study was 29 years old). To more fully explore the potential role conflict generated in mentor-protégé relationships, multi-dimensional measures of role conflict are needed. The current study used the traditional Rizzo et al. (1970) role conflict scale, which is a one-dimensional scale. Even though Kahn et al. (1964) theorized multiple forms of role conflict, including inter-sender and person–role conflict, the multi-dimensionality of role conflict has not been examined. Future research should examine whether different types of role conflict experienced by public accounting employees have different antecedents and consequences. Mentors may be able to assist protégés in managing inter-sender role conflict, where protégés receive mixed messages from multiple supervisors. However, mentors may contribute to person–role conflict when protégés' goals and values diverge from those held by mentors. Further study of the dynamics of person-role conflict in mentoring relationships should provide insight into the struggle over identity and individuality (Covaleski, Dirsmith, Heian and Samuel, 1998, Foucault, 1983 and Townley, 1993). Other questions raised in this study regarded the impact of formal mentors on job outcomes. There was no instance in which formal mentors were directly associated with employee job performance or turnover intentions. However, for female managers, formal mentors were indirectly associated with positive job outcomes through reductions in role ambiguity. At least in regards to female managers, formal mentoring programs may be an institutional socialization tactic that supports female employees in assuming new organizational roles and helps reduce role ambiguity ( Ashforth and Saks, 1996 and Van Maanen and Schein, 1979). Also, formal mentoring programs may legitimize intimate work relationships that otherwise would encounter gender-based barriers (Ragins, 1989). In general, the outcomes reported in this study support the observation by Covaleski et al. (1998) that formal mentoring programs are often ineffectual. Given that formal mentoring relationships are unlikely to have the same bonding and commitment exhibited by informal relationships (Ragins & Cotton, 1999), the potential for formal mentoring relationships to support protégés' career progress seems minimal. Regarding career progression in large public accounting firms, it appears that formal mentoring programs are not a substitute for informal mentoring. However, informal mentoring should be viewed with caution: intensive career-related mentoring is likely to be associated with higher levels of role conflict.