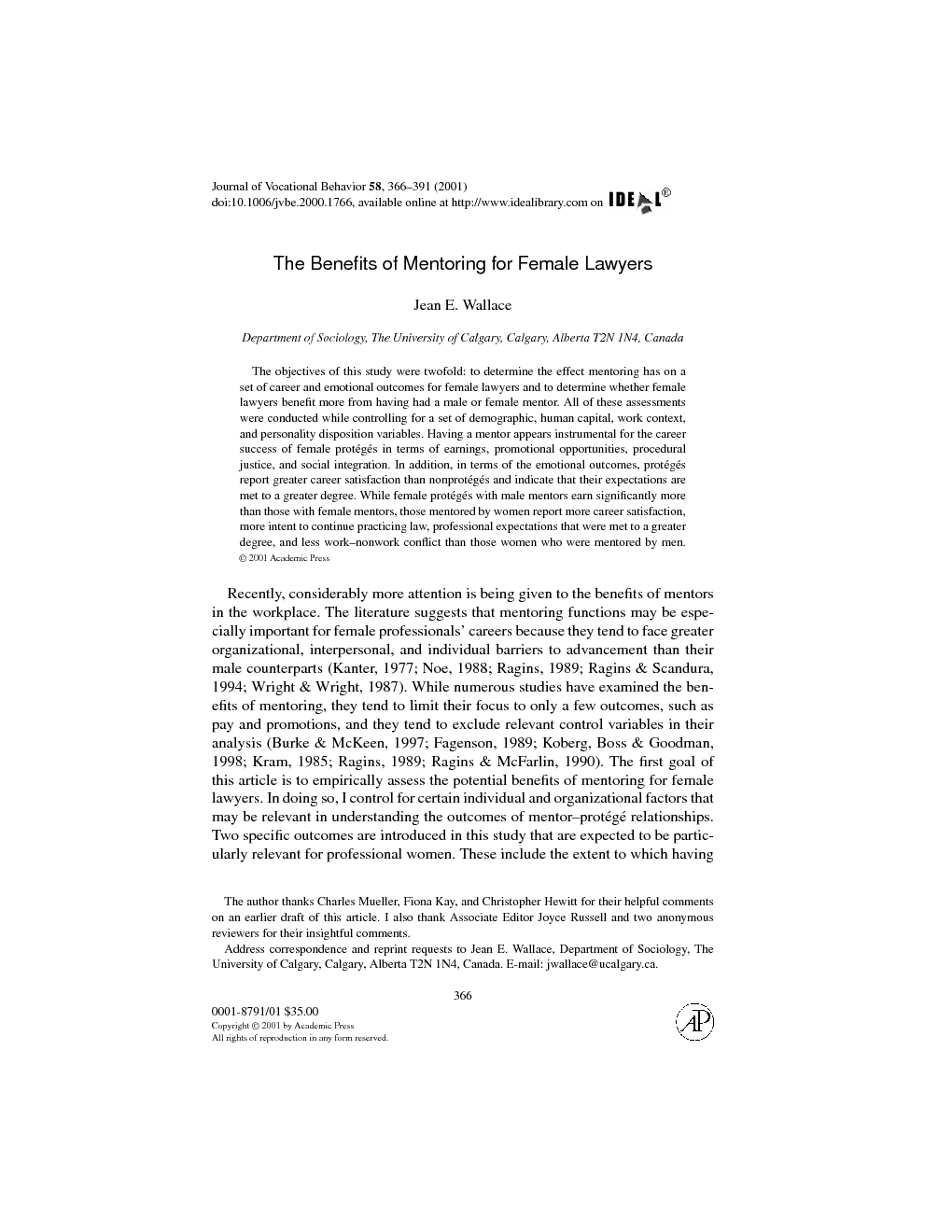 The objectives of this study were twofold: to determine the effect mentoring has on a set of career and emotional outcomes for female lawyers and to determine whether female lawyers benefit more from having had a male or female mentor. All of these assessments were conducted while controlling for a set of demographic, human capital, work context, and personality disposition variables. Having a mentor appears instrumental for the career success of female protégés in terms of earnings, promotional opportunities, procedural justice, and social integration. In addition, in terms of the emotional outcomes, protégés report greater career satisfaction than nonprotégés and indicate that their expectations are met to a greater degree. While female protégés with male mentors earn significantly more than those with female mentors, those mentored by women report more career satisfaction, more intent to continue practicing law, professional expectations that were met to a greater degree, and less work–nonwork conflict than those women who were mentored by men

Recently, considerably more attention is being given to the benefits of mentors in the workplace. The literature suggests that mentoring functions may be especially important for female professionals’ careers because they tend to face greater organizational, interpersonal, and individual barriers to advancement than their male counterparts (Kanter, 1977; Noe, 1988; Ragins, 1989; Ragins & Scandura, 1994; Wright & Wright, 1987). While numerous studies have examined the benefits of mentoring, they tend to limit their focus to only a few outcomes, such as pay and promotions, and they tend to exclude relevant control variables in their analysis (Burke & McKeen, 1997; Fagenson, 1989; Koberg, Boss & Goodman, 1998; Kram, 1985; Ragins, 1989; Ragins & McFarlin, 1990). The first goal of this article is to empirically assess the potential benefits of mentoring for female lawyers. In doing so, I control for certain individual and organizational factors that may be relevant in understanding the outcomes of mentor–prot´eg´e relationships. Two specific outcomes are introduced in this study that are expected to be particularly relevant for professional women. These include the extent to which having been mentored enhances professional women’s sense of social integration at work and reduces their work–family conflict. In addition, the literature suggests that male and female mentors may play different roles for female prot´eg´es working in male-dominated organizations or occupations (Noe, 1988; Ragins, 1989, 1997; Ragins&McFarlin, 1990). Nearly all previous research, however, has investigated the effects of mentors’ gender and prot´eg´es’ gender separately without taking into account the conjoint effects of the gender composition of the relationship (Ragins, 1997). The second goal of this study is to examine whether female prot´eg´es benefit more from having a male mentor or a female mentor in terms of the career and emotional outcomes examined in this paper.