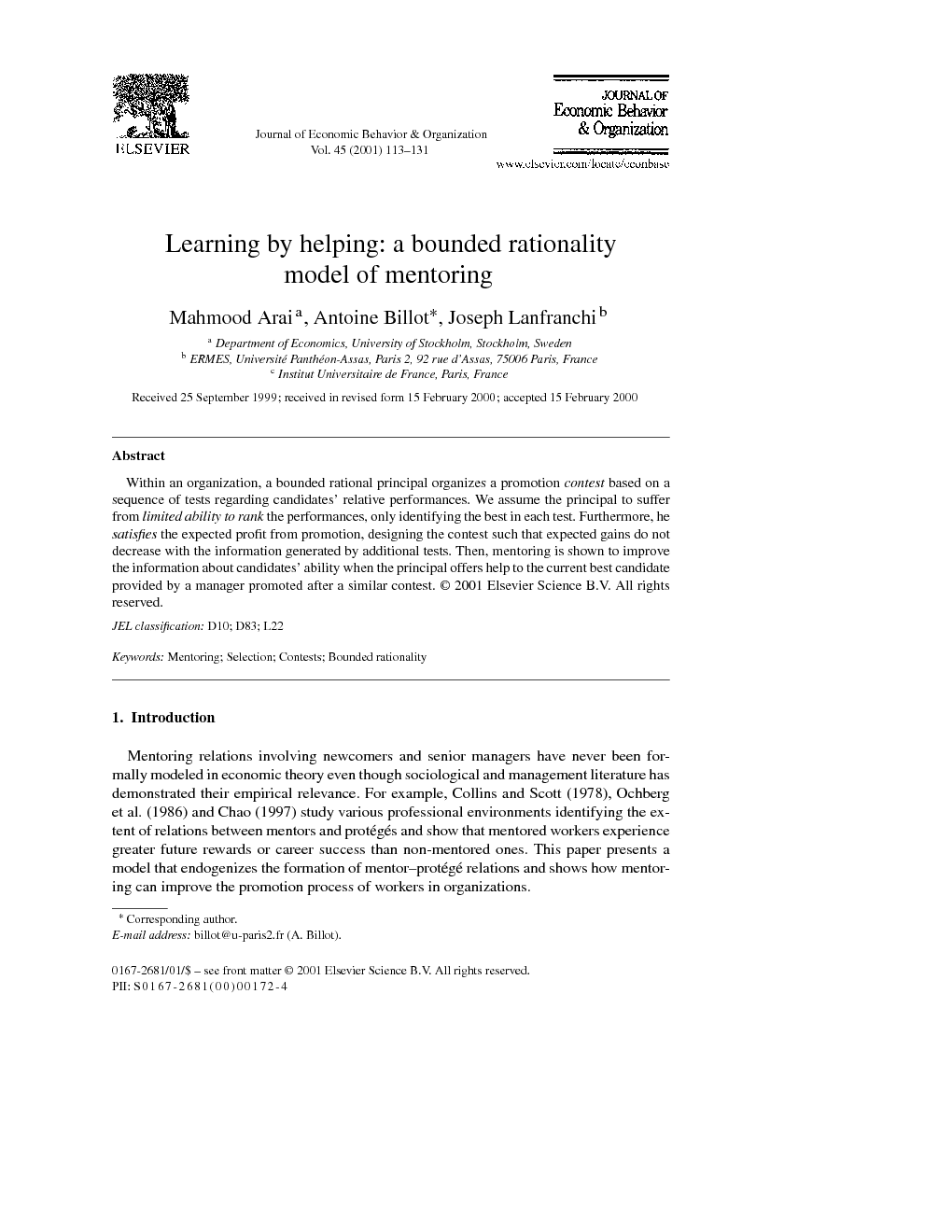 Within an organization, a bounded rational principal organizes a promotion contest based on a sequence of tests regarding candidates’ relative performances. We assume the principal to suffer from limited ability to rank the performances, only identifying the best in each test. Furthermore, he satisfies the expected profit from promotion, designing the contest such that expected gains do not decrease with the information generated by additional tests. Then, mentoring is shown to improve the information about candidates’ ability when the principal offers help to the current best candidate provided by a manager promoted after a similar contest.

The model we propose in this paper is, to our knowledge, the first theoretic approach formally establishing that mentor–protégé relations can be beneficial to the organization. Two remarks can be made in relation to connected literature as follows: 1. The main result, as an extension of the Meyer’s idea, allows us to interpret the learning behavior of the principal in the context of the job design literature. Earlier literature studying the optimal choice of the job contents as a part of the motivation system show that cooperation and coordination between workers of the same hierarchical rank can complement incentive compensation policies (see Holmstrom and Milgrom, 1991 and Valsecchi, 1996). Analogous to this ‘incentive’ argument for cooperation, our contribution establishes the importance of work organization for the selection. 2. Mentoring as an integral part of a selection process according to our model, serves also as a means of creating long term employment relations between the workers and their firm in line with human capital theory. The implementation of a vertical cooperation, as learning by doing, naturally increases the productive knowledge of the worker. Moreover, after the promotion, a worker is regarded as a specific asset for the organization since promoted workers’ reputation can be used to optimally bias future promotion contests. Such a specific human capital reinforces the link between senior workers and the organization. In some sense, expected gains from efficient screening with mentoring are similar to those generated by use of Old Boys Networks to proceed to external hiring (see Simon and Warner, 1992). From a methodological viewpoint, a new feature of our contribution is the modeling of the selection problem in a discrete choice style. For further research, this family of probabilistic models seems to be useful for describing imperfect decision making within the context of organization theory. A natural extension of this paper is to model the promotion process when supervisors record the results of repeated quota-like tests in order to analyze the properties and relative advantage of the two systems of selection: the tournaments and quotas (see Lazear and Rosen (1981) for tournaments and Drago and Turnbull (1991) for quotas). An appropriate tool for that purpose could be the Tversky’s selection model of discrete alternatives (Tversky, 1972), based on binary experiments about specific attributes.