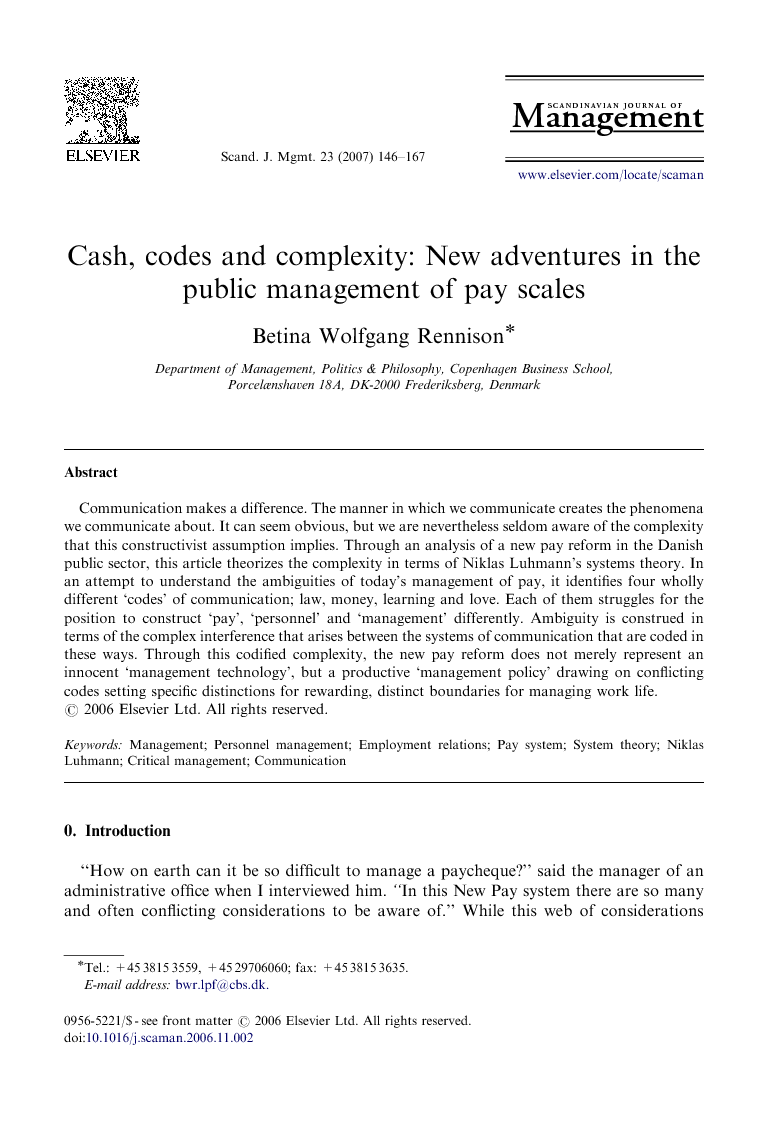 Communication makes a difference. The manner in which we communicate creates the phenomena we communicate about. It can seem obvious, but we are nevertheless seldom aware of the complexity that this constructivist assumption implies. Through an analysis of a new pay reform in the Danish public sector, this article theorizes the complexity in terms of Niklas Luhmann's systems theory. In an attempt to understand the ambiguities of today's management of pay, it identifies four wholly different ‘codes’ of communication; law, money, learning and love. Each of them struggles for the position to construct ‘pay’, ‘personnel’ and ‘management’ differently. Ambiguity is construed in terms of the complex interference that arises between the systems of communication that are coded in these ways. Through this codified complexity, the new pay reform does not merely represent an innocent ‘management technology’, but a productive ‘management policy’ drawing on conflicting codes setting specific distinctions for rewarding, distinct boundaries for managing work life.

In examining New Pay, the main argument of this article is that the ambiguities of pay are the result of interference between codes that condition how we communicate about pay. ‘Interference’, in systems theory, implies the existence of autopoietic systems that code communication in different ways (Luhmann (1977), Luhmann (1996), Luhmann (1998) and Luhmann (2000)). Thus, the most important task in the article has been to characterize the separate codes that are at work in communication about pay. To this end, a sample of communication about New Pay has been produced by interviewing members of public organisations in Denmark. This sample brings evidence of four diverse communicative codes; law, money, learning and love. Each of the codes constructs communication in its own way and fosters sharply contrasting perspectives on personnel and management. Thus, management emerges as a plural phenomenon, taking on different forms such as ‘formal authorisation’, ‘clear-cut economic transaction’, ‘educational supervision at a distance’, or ‘absorbing seduction of integrated selves’. The employees are correspondingly constructed by management as ‘legal objects’, ‘calculating wage earners’, ‘pupils fit for development’ or as ‘passionate partners’. By this codified complexity the New Pay reform does not represent an innocent ‘management technology’, but a productive ‘management policy’ drawing on conflicting codes that establish specific distinctions for rewarding workplace successes, special forms for the exercise of management, and distinct boundaries for being an employee. The communicative process has constitutive consequences, not just for the particular phenomenon (and thereby for what the communication deals with) but also for whom it articulates as relevant or irrelevant, included or excluded. And the criteria of inclusion change all the time. There are no fixed and clear role-descriptions, just changing and contingent expectations set by the complexity of codes. In this complexity of cash and codes, codes are continuously chosen, renewed and replaced, pushing and pulling the communication in different directions. The different codes occur simultaneously and sequentially. These shifting perspectives can result in disruptions, rendering situations unclear for the participants. Disorder and unpredictability permeates the communication we can observe. ‘Just when we thought that this is what it is all about…’ communication about pay invokes another code. There is a persistent multiplicity of meaning-creating differences. As this article has shown, the new complexity of pay-roll management is constructed by the differentiated communication it employs. Decisions in modern organisations are inevitably made by dealing with differences between codes and continuously managing the tension between them. The strategic management of ambiguity that Eisenberg (1984) describes can thus be understood as management of the interference that arises by bringing the diverse codes together. The challenge of management is to use coded complexity as a strategic resource for the realisation of management objectives—for fostering flexibility, creativity and opportunities for change. Management studies can be of assistance here by shedding more light on the conditions under which management constitutes management itself.