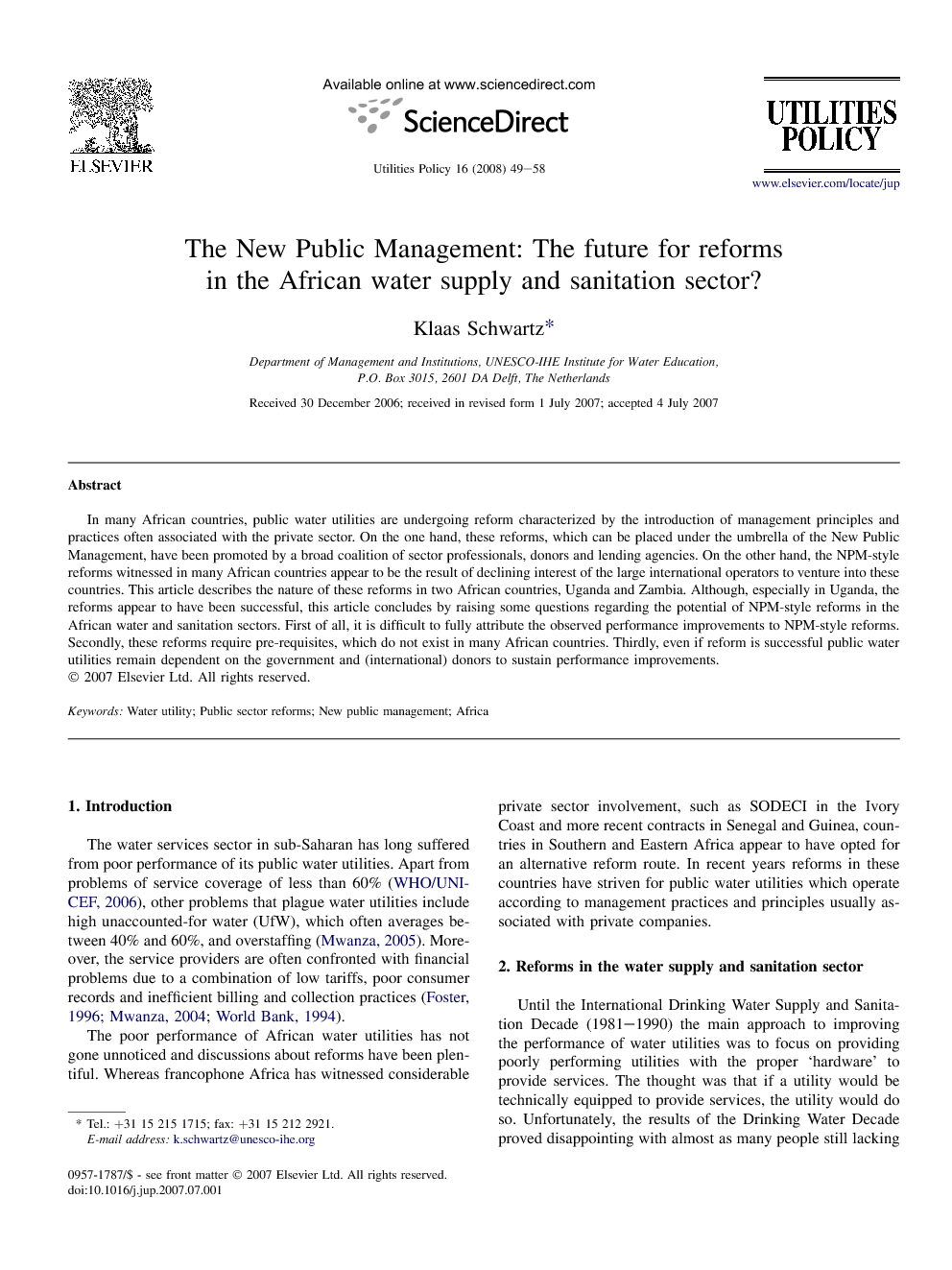 In many African countries, public water utilities are undergoing reform characterized by the introduction of management principles and practices often associated with the private sector. On the one hand, these reforms, which can be placed under the umbrella of the New Public Management, have been promoted by a broad coalition of sector professionals, donors and lending agencies. On the other hand, the NPM-style reforms witnessed in many African countries appear to be the result of declining interest of the large international operators to venture into these countries. This article describes the nature of these reforms in two African countries, Uganda and Zambia. Although, especially in Uganda, the reforms appear to have been successful, this article concludes by raising some questions regarding the potential of NPM-style reforms in the African water and sanitation sectors. First of all, it is difficult to fully attribute the observed performance improvements to NPM-style reforms. Secondly, these reforms require pre-requisites, which do not exist in many African countries. Thirdly, even if reform is successful public water utilities remain dependent on the government and (international) donors to sustain performance improvements.

The water services sector in sub-Saharan has long suffered from poor performance of its public water utilities. Apart from problems of service coverage of less than 60% (WHO/UNICEF, 2006), other problems that plague water utilities include high unaccounted-for water (UfW), which often averages between 40% and 60%, and overstaffing (Mwanza, 2005). Moreover, the service providers are often confronted with financial problems due to a combination of low tariffs, poor consumer records and inefficient billing and collection practices (Foster, 1996 and Mwanza, 2004; World Bank, 1994). The poor performance of African water utilities has not gone unnoticed and discussions about reforms have been plentiful. Whereas francophone Africa has witnessed considerable private sector involvement, such as SODECI in the Ivory Coast and more recent contracts in Senegal and Guinea, countries in Southern and Eastern Africa appear to have opted for an alternative reform route. In recent years reforms in these countries have striven for public water utilities which operate according to management practices and principles usually associated with private companies.

Over the past decade(s) the NPM-style reform strategies have been implemented widely. On the one hand these reforms have been promoted by a broad coalition of sector professionals, donors and lending agencies (Batley, 1999). On the other hand, the NPM-style reforms witnessed in many African countries are the result of declining interest of the large international operators to venture into these countries. Realizing that the existing poor service provision could not be tolerated and with the (international) private sector seeming to have limited interest, the reforms appear to be the only way in which support from international donors and lending agencies4 could be maintained whilst reforms were implemented in the sector and in individual water utilities. In many of the African countries such as Zambia, Namibia and Tanzania it is still too early to tell how the reforms will impact service provision. In the case of Uganda, however, the results of the reforms appear impressive. Table 5 provides an overview of the situation prior to the implementation of reforms and the current situation. 4.1. Some questions The NWSC has managed to show impressive performance improvements in their provision of water services, and the NWSC is increasingly recognized as a promising example for other public water utilities to follow. However, despite the successes of the NWSC, some questions regarding the NPM and its potential in the African water sector persist. One question is if the performance improvements witnessed in Uganda are fully attributable to NPM-reforms. Reforms often consist of several simultaneous changes (Pollitt, 2003), making it difficult to conclude what the impact of the NPM reforms have been. What part of the performance improvements can be attributed to the NPM reforms, such as the performance contract between the Ministry of Water and Environment and the NWSC, and what parts of the performance improvements can be linked to other characteristics such as leadership of top management or the level of support received from donors and lending agencies? The second question is linked to the first question. It concerns the pre-requisites, which must be in place prior to the implementation of NPM-style reforms, the fundamentals upon which the NPM-reforms rest as it were. Most likely the NPM-reforms in Uganda have been successful because other characteristics such as the leadership of top management, the strong institutional cultures, the degree of professionalism of the staff, the level of support from the Ministries and the support of international donors and lending agencies have been present. In other words, the NPM-reforms, as described in this article, built upon (and complement) these other characteristics. If these other characteristics are not present in other African public water utilities seeking to follow the same ‘reform-route’ as the NWSC, the question is if the reform measures will have the same impact they had in Uganda? Implementing NPM reforms without ensuring that the required pre-requisites exist may prove to have little impact. A third question relates to the dependency on government and donor support that these utilities continue to display. Despite policies and plans to achieve full cost recovery in the near future, current tariffs in all cases examined are well below levels of full cost recovery. One study finds that even in Uganda, “the current tariffs are so low that they can only meet the operation and maintenance costs of the water supply systems resulting on dependence on grants, loans and subsidies for investments and systems expansion” (UN-WATER, 2006). Also in Zambia, full cost recovery is still far being achievable as 25% of the operational costs are not recovered by the commercial utilities at current (NWASCO, 2005). In fact, the Managing Director of NWSC has argued that “full cost recovery is a myth”, especially in the so-called least developed countries (Muhairwe, 2006c). This means that water utilities in these countries will always be dependent on either government grants or donor funds to provide for the necessary investment capital. If full cost recovery is indeed a myth in the least developed countries, then the success of the reforms will depend heavily on the financial support the utilities continue to receive from the government and donors. If, in the near future this support is withdrawn or reduced because of political turmoil or other reasons, it will most likely have an immediate impact on the performance of the utilities. 4.2. The future of reforms? What does this all mean for the New Public Management as a reform strategy in the African water supply and sanitation sector? The example of the NWSC in Uganda has shown that under the right circumstances these reforms can prove effective in improving the performance of public water utilities. In that sense, policy makers should seriously consider the use of NPM-type reforms. At the same time, the NPM reforms will have little impact if the conditions under which they are implemented do not support the introduction of these reforms (such as leadership, the strong institutional culture, high degree of professionalism of staff, support from the Ministries and support from donors and lending agencies). Introducing NPM reforms, with their emphasis on accountability of the utility and employees and of incentives for performance improvement, is unlikely to yield results of the institutional culture and leadership are lacking in that particular utility. This means that a different reform strategy (focusing on these dimensions) may be more preferable than implementing NPM reforms.