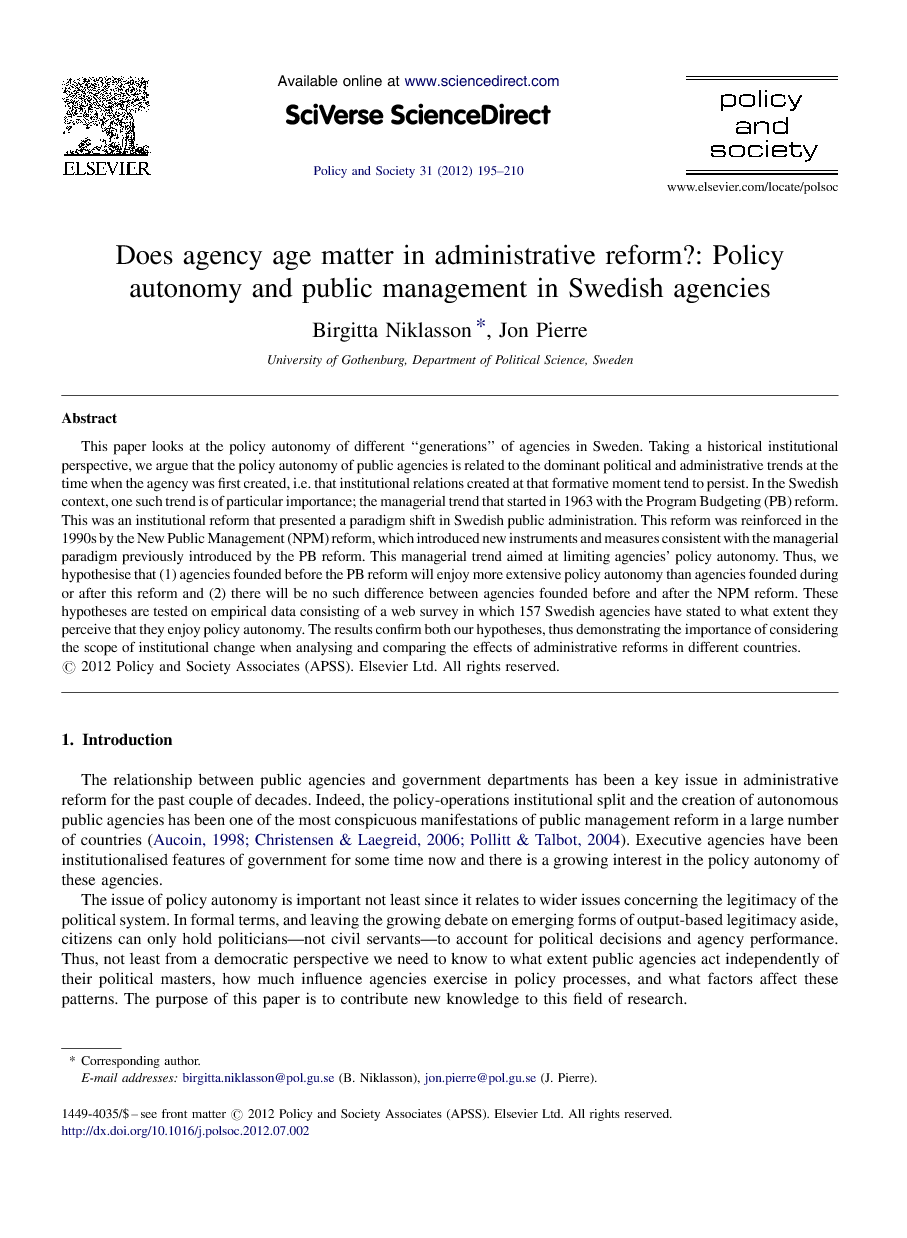 This paper looks at the policy autonomy of different “generations” of agencies in Sweden. Taking a historical institutional perspective, we argue that the policy autonomy of public agencies is related to the dominant political and administrative trends at the time when the agency was first created, i.e. that institutional relations created at that formative moment tend to persist. In the Swedish context, one such trend is of particular importance; the managerial trend that started in 1963 with the Program Budgeting (PB) reform. This was an institutional reform that presented a paradigm shift in Swedish public administration. This reform was reinforced in the 1990s by the New Public Management (NPM) reform, which introduced new instruments and measures consistent with the managerial paradigm previously introduced by the PB reform. This managerial trend aimed at limiting agencies’ policy autonomy. Thus, we hypothesise that (1) agencies founded before the PB reform will enjoy more extensive policy autonomy than agencies founded during or after this reform and (2) there will be no such difference between agencies founded before and after the NPM reform. These hypotheses are tested on empirical data consisting of a web survey in which 157 Swedish agencies have stated to what extent they perceive that they enjoy policy autonomy. The results confirm both our hypotheses, thus demonstrating the importance of considering the scope of institutional change when analysing and comparing the effects of administrative reforms in different countries.

The relationship between public agencies and government departments has been a key issue in administrative reform for the past couple of decades. Indeed, the policy-operations institutional split and the creation of autonomous public agencies has been one of the most conspicuous manifestations of public management reform in a large number of countries (Aucoin, 1998, Christensen and Laegreid, 2006 and Pollitt and Talbot, 2004). Executive agencies have been institutionalised features of government for some time now and there is a growing interest in the policy autonomy of these agencies. The issue of policy autonomy is important not least since it relates to wider issues concerning the legitimacy of the political system. In formal terms, and leaving the growing debate on emerging forms of output-based legitimacy aside, citizens can only hold politicians—not civil servants—to account for political decisions and agency performance. Thus, not least from a democratic perspective we need to know to what extent public agencies act independently of their political masters, how much influence agencies exercise in policy processes, and what factors affect these patterns. The purpose of this paper is to contribute new knowledge to this field of research. Many accounts of agencies’ policy autonomy overlook the fact that such autonomy is essentially a two-way street. There is now growing evidence of the significance of executive agencies in shaping public policy. Still, the typical approach to agency autonomy is to investigate the extent to which departments can control the policy activities or the internal management of the agencies, thus ignoring the more complex issues of agency influence over policy. However, there are studies, for example that by Verhoest, Verschurere, Rubecksen, and MacCarthaigh (2010), that take the opposite perspective by studying the level of autonomy as reported by the agencies themselves. Following their example, we look at the level of policy autonomy perceived by different generations of Swedish agencies. In most countries, the rise of autonomous or semi-autonomous public agencies is closely associated with the rise of New Public Management (NPM) (Aucoin, 1998, Christensen and Laegreid, 2006, Pollitt et al., 2001, Pollitt and Bouckaert, 2004 and Pollitt and Talbot, 2004). Starting in a few Anglo-Saxon countries in the 1980s, this reform spread quickly across the Western world and beyond. One of the key points of this reform was to reduce the policy autonomy of agencies and instead increase their operational autonomy. Drawing on a historical institutional perspective on NPM reform, Verhoest et al. (2010:256–257) show that agencies formed before the introduction of NPM enjoy higher levels of policy autonomy compared to agencies that were created later. There are several reasons why the time of foundation of an agency should have an impact on its policy autonomy. The historical institutional explanation offered by previous scholars (Lægreid et al., 2006 and Verhoest et al., 2010) is that, analytically speaking, age is a proxy for agency culture: “a public sector organization is established at a specific time, and is therefore shaped by particular cultural contexts or norms and values that leave a permanent impression on it” (Verhoest et al., 2010:35). This paper conducts an empirical test of these findings by measuring policy autonomy in a different way and in a different cultural and institutional context. The empirical data is collected in Sweden where core public management ideas were introduced in 1963 during the Program Budgeting (PB) reform, i.e. about two decades before the global diffusion of NPM. Our analysis substantiates the importance of considering the types of change triggered by administrative reform when using age as an explanatory variable. Specifically, we investigate what degree of change is necessary before we should expect a difference in policy autonomy between agencies that were founded before and after an administrative reform. Our results indicate that this requires what Hall (1993) calls an institutional change of “the third degree”. We will discuss Hall's typology of change and how it can be applied to administrative reform later in the paper. The remainder of the paper is organised as follows. We first define policy autonomy and discuss how such autonomy is related to agency age and administrative reform in an institutional perspective. This section will be followed by a brief description of the Swedish administrative context and the introduction of two hypotheses. We then turn to our empirical analysis by introducing our data set, specifying independent variables and presenting our empirical results. The paper closes with a discussion of the results and how they speak to the conceptual issues raised earlier in the paper.

This study has taken a historical institutional perspective on the policy autonomy of public agencies. Our assertion, derived from that institutional approach, is that the first few years of an organisation's existence define much of its relationship with other organisations in its external environment. Applied to the agency system, that perspective would suggest that the level of an agency's current policy autonomy depends on the nature of the predominant organisational and inter-organisational relations at the time of the agency's creation. Agencies created in a context when the norms of the administrative system accord agencies a great deal of policy autonomy will try to uphold the same level of autonomy even when the norms in their environment change. Thus, we hypothesised that those Swedish agencies that were founded before the managerial reforms were initiated in 1963 would state that they enjoy higher degrees of policy autonomy than agencies created after this institutional change of the third degree. The Swedish administrative system has gone through other reforms after this, of course, but they have all been in line with the basic norms and assumptions of the Program Budgeting (PB) reform of 1963. Thus, the advent of New Public Management (NPM) represented only an institutional change of the second degree in Sweden. We therefore hypothesised that this reform would not have as strong an effect on agencies’ perceived policy autonomy as the earlier PB reform. Our results confirm both our hypotheses. Agencies founded before the PB reform perceive that they enjoy more policy autonomy in relation to their respective parent department. They are more involved in the process of initiating, formulating, and making decisions on important policies relevant to their own organisation. This implies that institutional changes of the third degree can have long-term effects on the policy autonomy of public agencies; changes of such scope and magnitude redefine institutional roles and relationships with other institutions. There is no such obvious difference between agencies founded before and after the introduction of NPM in 1990, which was an institutional change of the second degree. The significance of these findings hinges to some extent on the fact that several of the main variables included in our analyses (see Section 6) are based on agencies’ perceptions. Agencies founded before the PB reform, for example, claim that they enjoy a greater degree of policy autonomy, but is this really the case? There is, of course, always a risk that we have missed to control for an important variable that might have influenced these agencies to answer our survey differently from the other agencies. We therefore hope that future studies will be able to re-run our analysis using data of observed policy autonomy. We conclude that dominant norms of the administrative system regarding policy autonomy are imprinted in the agencies at the time of their creation and that these norms are not easily changed, not even when the administrative system goes through an institutional change of the third degree. Individual agencies might still resist such radical changes and try to defend their old privileges. In order to understand the policy autonomy of public agencies, it is therefore important to look deep into the history and development of the administrative system in which they exist and work. Furthermore, what develops into a third degree change in one context might only turn out a second, or a first degree change in another. Part of the explanation to why the PB reform caused a third degree change in Sweden, whereas the NPM reform only led to second degree change, may be found in the nature of the two different reform efforts. The PB reform was problem-driven; it was implemented in order to address significant problems of inefficiency and rigidity. The NPM reform, by contrast, was driven mainly by ideas imported from the UK and other Anglo-Saxon countries without a clear connection to a salient problem (Suleiman, 2003). The NPM reform thus lacked the rationale of the PB reform. Hence, we must be careful when comparing the effects of administrative reforms in different countries. Such comparisons require that we take the starting point into account and consider what kind of institutional change a particular reform represents in different contexts.