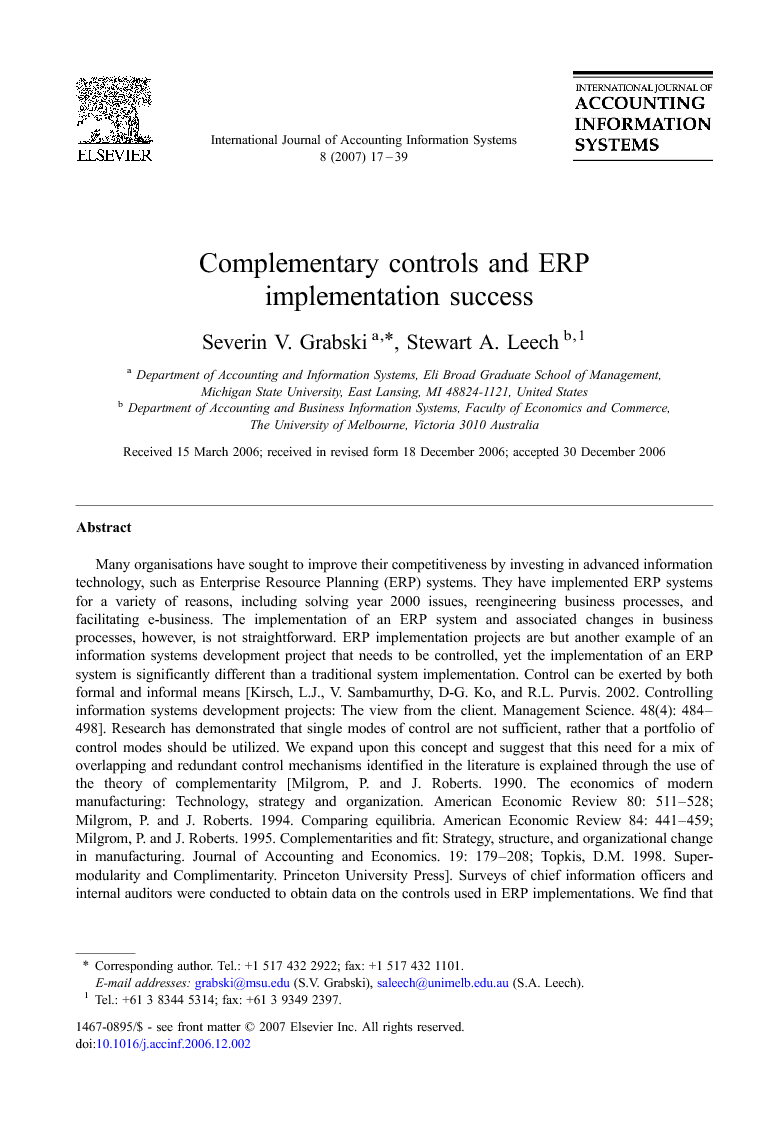 Many organisations have sought to improve their competitiveness by investing in advanced information technology, such as Enterprise Resource Planning (ERP) systems. They have implemented ERP systems for a variety of reasons, including solving year 2000 issues, reengineering business processes, and facilitating e-business. The implementation of an ERP system and associated changes in business processes, however, is not straightforward. ERP implementation projects are but another example of an information systems development project that needs to be controlled, yet the implementation of an ERP system is significantly different than a traditional system implementation. Control can be exerted by both formal and informal means [Kirsch, L.J., V. Sambamurthy, D-G. Ko, and R.L. Purvis. 2002. Controlling information systems development projects: The view from the client. Management Science. 48(4): 484–498]. Research has demonstrated that single modes of control are not sufficient, rather that a portfolio of control modes should be utilized. We expand upon this concept and suggest that this need for a mix of overlapping and redundant control mechanisms identified in the literature is explained through the use of the theory of complementarity [Milgrom, P. and J. Roberts. 1990. The economics of modern manufacturing: Technology, strategy and organization. American Economic Review 80: 511–528; Milgrom, P. and J. Roberts. 1994. Comparing equilibria. American Economic Review 84: 441–459; Milgrom, P. and J. Roberts. 1995. Complementarities and fit: Strategy, structure, and organizational change in manufacturing. Journal of Accounting and Economics. 19: 179–208; Topkis, D.M. 1998. Supermodularity and Complimentarity. Princeton University Press]. Surveys of chief information officers and internal auditors were conducted to obtain data on the controls used in ERP implementations. We find that groups of complementary controls need to be employed in the implementation of ERP systems to achieve a successful implementation.

As markets become more competitive, organisations seek new business opportunities to enhance their competitiveness. Often, organisations focus on improving their agility, i.e., the speed at which they can respond to consumers, improve service, enhance product quality and improve production efficiency. It is commonly accepted that information technology should be used to fundamentally change the business (Davenport, 2000). Many organisations, therefore, seek to improve their competitiveness by utilizing advanced information technology, such as Enterprise Resource Planning (ERP) systems. The implementation of an ERP system, however, is not an easy task. It is a major project and as such requires the organisation to pay attention to a variety of stakeholders (e.g., management, information systems professionals, line workers, consultants, and trading partners) and the management of their motivations and expectations (Sambamurthy and Kirsch, 2000). Without sound management and control of both the implementation process and the organisational changes, an ERP system implementation can be a difficult and risky process (see, for example, Cameron and Meyer, 1998, Davenport, 1998, Deutsch, 1998 and O'Leary, 2000). ERP implementations differ from traditional systems analysis and design projects in scale, complexity, organisational impact, user participation, cost and business impact (Bagchi et al., 2003 and Grabski et al., 2001). ERP implementations typically impact the entire organisation and are generally associated with business process reengineering (Davenport, 2000). Traditional analysis and design projects generally minimized business process reengineering, with the software written to match current business processes; whereas in ERP implementations software modifications are generally minimized, resulting in significant process and organisational changes. Costs associated with ERP projects are significantly higher than traditional projects, and failure can be devastating for an organisation (for example, the FoxMeyer Drugs bankruptcy (Hyde, in press and Scott, 1999)). Finally, the dynamics of user participation in the implementation of ERP systems are different than user participation in traditional systems development projects (Bagchi et al., 2003).

Several limitations should be noted. The usual caveats related to empirical research and the associated data analysis apply. The respondents are only those who chose to participate. A survivorship bias may exist, that is only organisations that implemented an ERP system and survived the implementation were included in the sample. The selection process also eliminated small firms from consideration. While we would have liked to match responses from CIOs and Internal Auditors from the same organisation, the restrictions imposed by the IIA-A precluded this. All data was collected via a mailed-out questionnaire, so common method bias may exist. Finally, while the sample size is relatively small, the response rates are consistent with prior research and the results obtained are consistent with the theory developed. Additionally, the limitations that are associated with perceptions of success and affect on the organisation (that might not reflect reality) apply to this research. However, two respondent groups, CIOs and internal auditors participated. Consequently, they should provide different insights. Furthermore, internal auditors are trained to be skeptical, and they do not have a vested interest in the project, nor are they afraid to tell management that a particular project is not as successful as management would have desired. We believe that the perceptions of success, affect, and fit (versus objective measures of success) are less of a limitation associated with this study than with studies that use a single respondent group or a single measure of perceived success. Much research on ERP implementation success has focused on individual case studies, proposal of theories, or examinations of selection processes. This research applies economic theory and examines implementation controls and subsequent perceived success of ERP systems. Two respondent groups, CIOs and internal auditors were chosen because of their diverse roles in ERP implementation. Based on the responses obtained from those groups, this research provides support for the theory of complementarity applied to ERP system implementations. Five factors were identified and were then found significant in a five-way interaction on perceived ERP system success and its affect on the organisation.