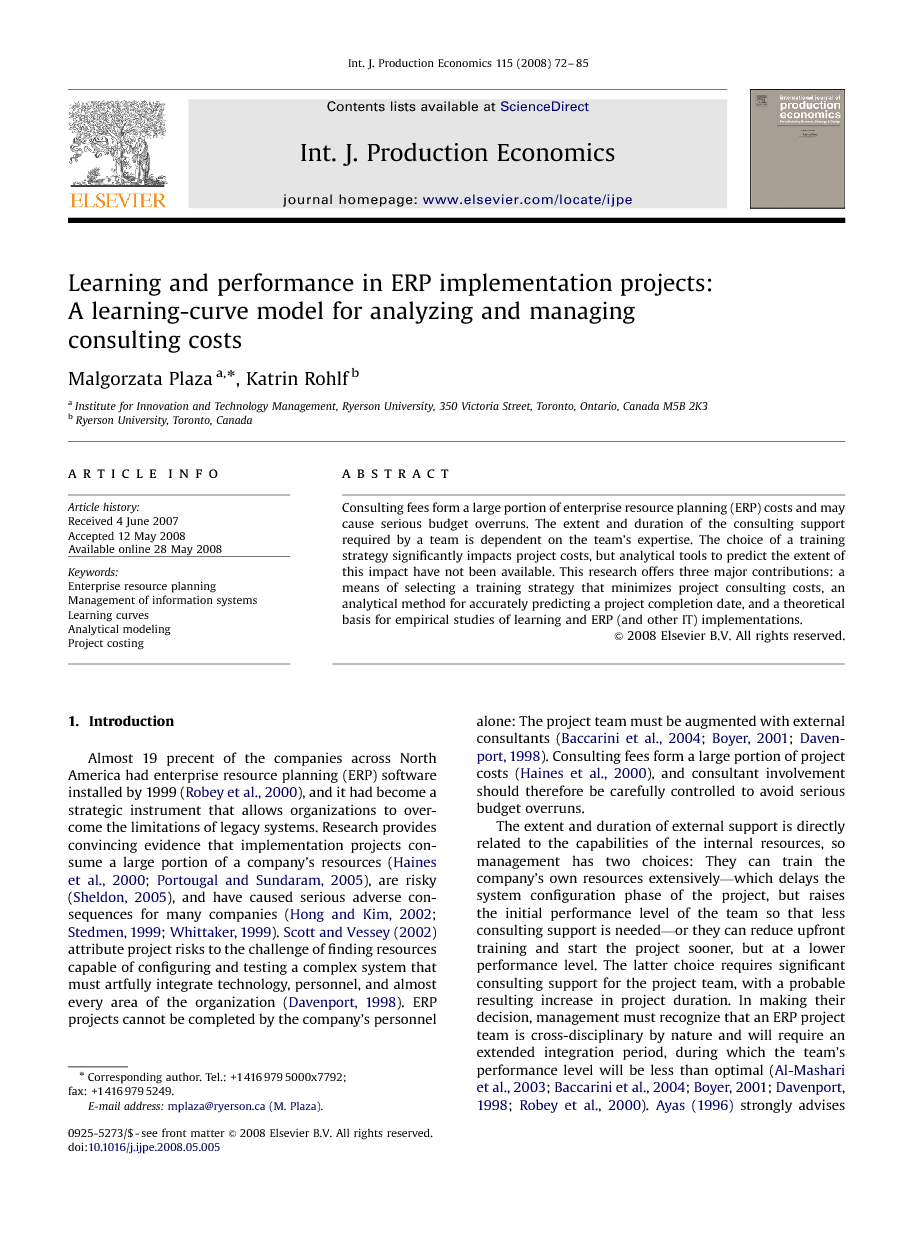 Consulting fees form a large portion of enterprise resource planning (ERP) costs and may cause serious budget overruns. The extent and duration of the consulting support required by a team is dependent on the team's expertise. The choice of a training strategy significantly impacts project costs, but analytical tools to predict the extent of this impact have not been available. This research offers three major contributions: a means of selecting a training strategy that minimizes project consulting costs, an analytical method for accurately predicting a project completion date, and a theoretical basis for empirical studies of learning and ERP (and other IT) implementations.

Almost 19 precent of the companies across North America had enterprise resource planning (ERP) software installed by 1999 (Robey et al., 2000), and it had become a strategic instrument that allows organizations to overcome the limitations of legacy systems. Research provides convincing evidence that implementation projects consume a large portion of a company's resources (Haines et al., 2000; Portougal and Sundaram, 2005), are risky (Sheldon, 2005), and have caused serious adverse consequences for many companies (Hong and Kim, 2002; Stedmen, 1999; Whittaker, 1999). Scott and Vessey (2002) attribute project risks to the challenge of finding resources capable of configuring and testing a complex system that must artfully integrate technology, personnel, and almost every area of the organization (Davenport, 1998). ERP projects cannot be completed by the company's personnel alone: The project team must be augmented with external consultants (Baccarini et al., 2004; Boyer, 2001; Davenport, 1998). Consulting fees form a large portion of project costs (Haines et al., 2000), and consultant involvement should therefore be carefully controlled to avoid serious budget overruns. The extent and duration of external support is directly related to the capabilities of the internal resources, so management has two choices: They can train the company's own resources extensively—which delays the system configuration phase of the project, but raises the initial performance level of the team so that less consulting support is needed—or they can reduce upfront training and start the project sooner, but at a lower performance level. The latter choice requires significant consulting support for the project team, with a probable resulting increase in project duration. In making their decision, management must recognize that an ERP project team is cross-disciplinary by nature and will require an extended integration period, during which the team's performance level will be less than optimal (Al-Mashari et al., 2003; Baccarini et al., 2004; Boyer, 2001; Davenport, 1998; Robey et al., 2000). Ayas (1996) strongly advises managers to balance training and knowledge-transfer investments with short-term performance demands, in order to support the project team's long-term performance goals.

The combination of formal training and training on the job is the most beneficial option from the consulting-cost perspective, and training/implementation strategy should be selected and assessed during the project planning phases. However, the comparative analysis of strategies cannot be conducted on the basis of consulting costs alone, as demonstrated in the case study. The number of internal staff that must be reassigned to the project is the other critical factor that affects training strategy selection, and management must weigh this factor carefully when selecting the best alternative. As discussed in Section 4.3.2, long duration project (Strategy 1) proves to be less expensive then rapid implementations (Table 3), which require more consulting resources and do not allow the team sufficient time to reach the performance threshold. During rapid implementations teams work below the optimal performance level most of the time; so the cost is significantly higher then for a long duration project, during which the team performs close to the performance threshold most of the time. The main benefit of the rapid strategies is that the company would have access to the new system much sooner, so the management is very interested in the short duration alternatives. As presented in Table 3, the least expensive rapid strategy is the one in which the consulting support is minimized and company uses internal resources instead (Strategy 4). Unfortunately, it is impractical to remove a significant amount of internal resources from their jobs for the duration of the project. The management must carefully assess several options in order to find the balance between the number of internal/external resources, duration of the project and cost of training/implementation.