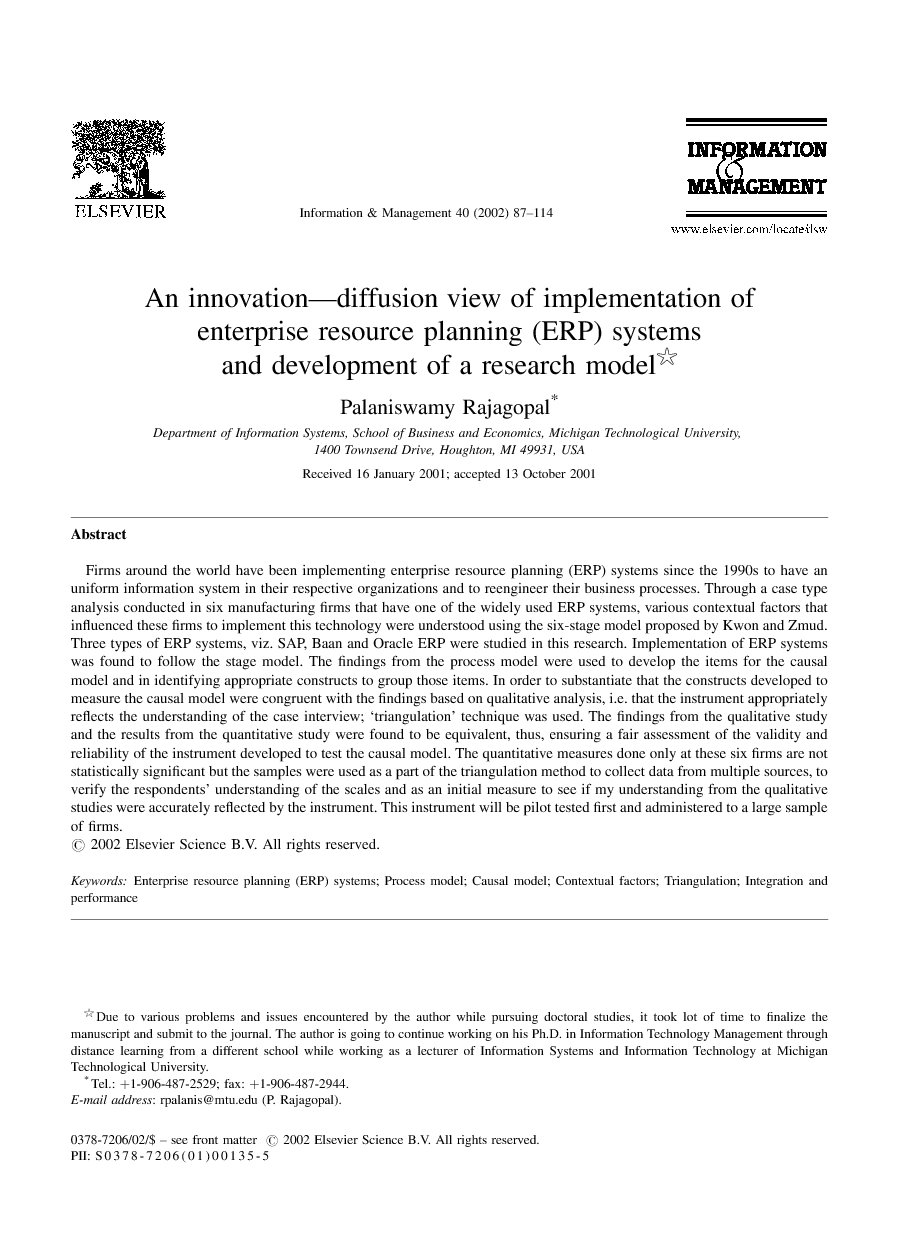 Firms around the world have been implementing enterprise resource planning (ERP) systems since the 1990s to have an uniform information system in their respective organizations and to reengineer their business processes. Through a case type analysis conducted in six manufacturing firms that have one of the widely used ERP systems, various contextual factors that influenced these firms to implement this technology were understood using the six-stage model proposed by Kwon and Zmud. Three types of ERP systems, viz. SAP, Baan and Oracle ERP were studied in this research. Implementation of ERP systems was found to follow the stage model. The findings from the process model were used to develop the items for the causal model and in identifying appropriate constructs to group those items. In order to substantiate that the constructs developed to measure the causal model were congruent with the findings based on qualitative analysis, i.e. that the instrument appropriately reflects the understanding of the case interview; ‘triangulation’ technique was used. The findings from the qualitative study and the results from the quantitative study were found to be equivalent, thus, ensuring a fair assessment of the validity and reliability of the instrument developed to test the causal model. The quantitative measures done only at these six firms are not statistically significant but the samples were used as a part of the triangulation method to collect data from multiple sources, to verify the respondents’ understanding of the scales and as an initial measure to see if my understanding from the qualitative studies were accurately reflected by the instrument. This instrument will be pilot tested first and administered to a large sample of firms.

Kaplan and Duchon [30] based on the research of Bredo and Feinberg [8] and Van Maanen [56] men- tioned that ‘‘ in qualitative studies, researchers develop categories and meanings from data through an itera-tive process that starts by developing an initial under- standing of the perspectives of those being studied and that particular understanding is then tested and mod- i fi ed through cycles of additional data collection and analysis until coherent interpretation is reached ’’ . This was realized in our case studies. During the fi rst case study at Owens Corning there was hardly an understanding of the ERP systems, its technology and usage in organizations and the performance enhance- ment upon implementation. After many interviews with this company a clear picture was obtained, and the fi ndings were used to develop interview questions and an instrument for triangulation for other inter- views. During the course of the fi eld studies in various companies, the understanding of these systems improved and a coherent interpretation of the factors of in fl uence, issues and performance were realized after data collection in many sample fi rms. It may not have been possible to obtain a clearer picture to develop theoretical models based on exploratory ana- lysis of just a few fi rms, and on the other hand, it would be totally wrong to develop and test models about a new area like ERP without doing case studies fi rst. From the results of the research reported in Table 3, it is obvious that all of these companies, which differ widely in many of the organizational characteristics, bene fi ted more than they anticipated through imple- menting these ERP systems and that without such an integrated system in place they could not gain com- petitive advantages in the current and coming years. Besides automating the various business processes, the ERP systems implementation has resulted in new ways of thinking about the organizational activities. Various problems faced by the organizations due to the incompatibility among the computer hardware and software systems were found to be overcome due to the implementation of ERP systems. The current business environment necessitates that an organization work together as a whole and also integrate to their organization the external elements such as the custo- mers and suppliers in order to achieve competitive superiority. The information technology integration through implementation of ERP enabled them to achieve these objectives fairly easily by making avail- able information needed for decision-making in real time. Based on the case analysis conducted in these six fi rms that have implemented ERP systems, this study explained the factors of in fl uence for ERP implementation, the process of ERP implementation, usage of the systems in the organization and the enhanced performance of the organization through implemen- tation of ERP systems. The ERP implementation process was found to go through stages as men- tioned by Kwon and Zmud, and this stage model was found to be useful in understanding the various issues associated with the implementation of ERP systems. All of the constructs were operationalized based on the fi eld interviews and IT implementation literature. The case fi ndings and the results of the preliminary survey were highly congruent indicating that the instrument developed is good to measure the factors of in fl uence, issues and performance. The barriers and facilitators were not measured in this preliminary survey but will be during the pilot test. Since ERP is a recent IT innovation, the research and reported literature are still in the initial stages. This paper makes a contribution to the literature by providing an empirical fi nding about the various ERP systems and their role in enhancing perfor- mance in an organization. Toward developing a model and an instrument to understand and quan- tify the ERP implementation process, the fi rst two steps recommended by Churchill [13] have been achieved through this research. Future research will complete the other six steps, and a sound and robust model about implementation and perfor- mance of ERP systems will be presented in the near future