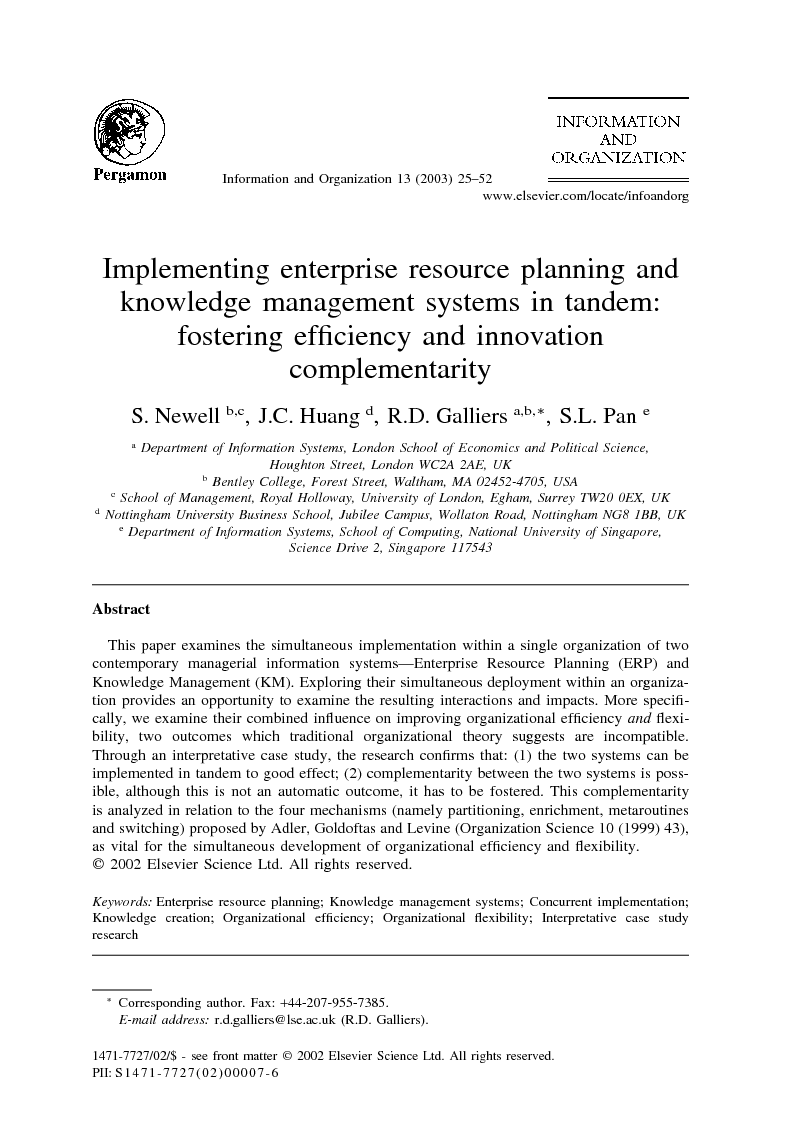 This paper examines the simultaneous implementation within a single organization of two contemporary managerial information systems—Enterprise Resource Planning (ERP) and Knowledge Management (KM). Exploring their simultaneous deployment within an organization provides an opportunity to examine the resulting interactions and impacts. More specifically, we examine their combined influence on improving organizational efficiency and flexibility, two outcomes which traditional organizational theory suggests are incompatible. Through an interpretative case study, the research confirms that: (1) the two systems can be implemented in tandem to good effect; (2) complementarity between the two systems is possible, although this is not an automatic outcome, it has to be fostered. This complementarity is analyzed in relation to the four mechanisms (namely partitioning, enrichment, metaroutines and switching) proposed by Adler, Goldoftas and Levine (Organization Science 10 (1999) 43), as vital for the simultaneous development of organizational efficiency and flexibility.

We have noted the tendency in the fi eld of IS/IT to embrace new concepts and technologies without due regard to past learning, and in isolation one from another. BPR was one such fad (Davenport, 1996); ERP and KM are in danger of being the latest in a long line of similar examples. This study has attempted to counter this trend in two respects. First, by considering the implementation of ERP and KM systems simultaneously, it has demonstrated how a particular organization was able to promote both fl exibility/innovation as well as ef fi ciency. Second, it reinforces the point that IT initiatives work best in contexts where there are socio-political process initiatives taking place in tandem (Markus, 1983). Rather than arguing on the side of the personalization/community approach as against its codi fi cation/cognitive counterpart (Hansen et al., 1999; Scarbrough, Swan & Preston, 1999), we have attempted an interpretation of a particular case example that tends to demonstrate that a balanced perspective can assist in exploiting explicit knowledge and in explor- ing, sharing and creating tacit knowledge simultaneously. With careful and astute management, we interpret the experience of Company A as giving some optimism in “ squaring the circle ” of the long-standing ef fi ciency- fl exibility trade-off (Clark & Staunton, 1989) through the strategic implementation of potentially complementary IS/IT initiatives. More speci fi cally, the discussion of similarities and differences of ERP and KM initiatives has revealed that the two systems can be implemented in tandem to good effect. Thus, while ERP emphasizes the improvement of information processing ef fi ciency, KM can facilitate the simultaneous development of organizational knowl- edge exploration and exploitation capability. The distinctive orientation and focus of each system has indicated how a speci fi c set of managerial issues can be addressedthrough the implementation of either ERP or KM. More critically, their distinc- tiveness surfaces the potential to implement simultaneously the two systems based on their complementary characteristics, thus leveraging their respective strengths. As is evident from the analysis, playing to the respective strengths of ERP and KM in tandem enables a process by which organizational ef fi ciency and fl exibility can be simultaneously developed. Moreover, overcoming their limitations can be enabled by the alignment of organizational capabilities in information processing, knowledge exploration and exploitation. Notwithstanding, there will doubtless be unexpected, and at times negative outcomes resulting, in addition to the positive and planned for bene fi ts.