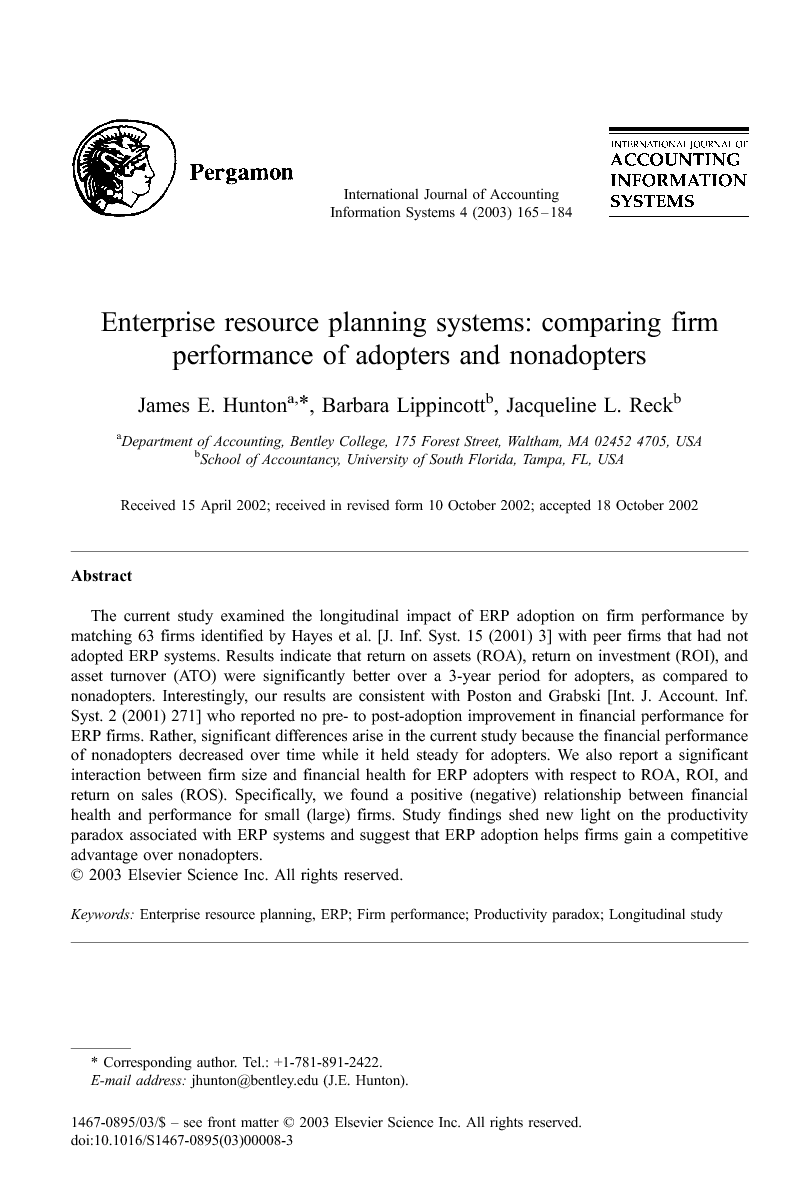 The current study examined the longitudinal impact of ERP adoption on firm performance by matching 63 firms identified by Hayes et al. [J. Inf. Syst. 15 (2001) 3] with peer firms that had not adopted ERP systems. Results indicate that return on assets (ROA), return on investment (ROI), and asset turnover (ATO) were significantly better over a 3-year period for adopters, as compared to nonadopters. Interestingly, our results are consistent with Poston and Grabski [Int. J. Account. Inf. Syst. 2 (2001) 271] who reported no pre- to post-adoption improvement in financial performance for ERP firms. Rather, significant differences arise in the current study because the financial performance of nonadopters decreased over time while it held steady for adopters. We also report a significant interaction between firm size and financial health for ERP adopters with respect to ROA, ROI, and return on sales (ROS). Specifically, we found a positive (negative) relationship between financial health and performance for small (large) firms. Study findings shed new light on the productivity paradox associated with ERP systems and suggest that ERP adoption helps firms gain a competitive advantage over nonadopters.

Enterprise resource planning (ERP) reflects an innovative business strategy, as ERP adoption involves business process improvement, best practices implementation, intra-enterprise integration and inter-enterprise coupling. ERP systems are designed to facilitate the ERP concept by replacing disparate patchworks of legacy systems across business organizations with synchronized suites of enterprise-wide applications. Potential benefits of an ERP system include productivity and quality improvements in key areas, such as product reliability, customer service, and knowledge management. As a result, ERP systems are expected to enhance market value and firm performance through efficiency and effectiveness gains. Hayes et al. (2001) offered evidence that the capital market placed incremental value on firms that adopted ERP systems, as investors reacted positively to ERP implementation announcements. Similarly, a behavioral study by Hunton et al. (submitted for publication) found that financial analysts significantly increased mean earnings forecast revisions when a firm announced plans to implement an ERP system. While both studies indicated that capital market participants believed ERP adoption would improve future firm performance, the extent to which expected returns eventually materialize remains unknown. To investigate this issue, Poston and Grabski (2001) examined the effect of ERP systems on firm performance over a 3-year period. They found a significant decrease in the ratio of employees to revenues in all 3 years, and a reduction in the ratio of cost of goods sold to revenues in year 3. However, they reported no significant improvement in the ratio of selling, general and administrative expenses to revenues, or residual income (net operating income minus imputed interest). Hence, they suggested a contradiction—while ERP systems appear to yield efficiency gains in some areas, higher offsetting cost-to-revenue increases elsewhere leave residual income unaffected. Other researchers have also observed little or no performance effects associated with increasing information technology (IT) expenditures, a phenomenon that is often referred to as the productivity paradox (e.g., Grover et al., 1998, Harris, 1994 and Pinsonneault, 1998). Robertson and Gatignon (1986) and Hitt and Brynjolfsson (1996) suggested another way to look at the productivity paradox; that is, to the extent that increased spending on IT yields efficiency and effectiveness improvements, firms will pass on financial gains to consumers through decreased prices in a competitive marketplace. To investigate this possibility, we examined the longitudinal impact of ERP adoption on firms by comparing financial performance indicators of adopters and nonadopters. To the extent that adopters realize and transfer financial rewards, performance of adopters might not change using a pre- to post-adoption analysis; however, the performance of nonadopters would be expected to decline by comparison. As expected, our results indicate that ERP adopters performed significantly better than non-ERP adopters, primarily due to declining performance of non-ERP adopters. Further, we examined whether the financial performance of ERP-adopting firms was affected by the interaction of firm size and financial health. Theory and research evidence indicates that the performance of small/healthy firms will be greater than small/unhealthy firms, and large/unhealthy firms will be greater than large/healthy firms Hayes et al., 2001 and Hunton et al., 2003. In accordance with the hypotheses, we found a significant interaction between firm health and size. Support for these propositions sheds new light on the productivity paradox by suggesting that performance gains and losses resulting from increased IT expenditures may be masked in aggregate, but such effects could be more precisely identified when firms are discriminated along key dimensions. The next section provides theory and develops the study hypotheses. Section 3 presents the sample selection technique and research method. The final two sections analyze study results and discuss the research findings.