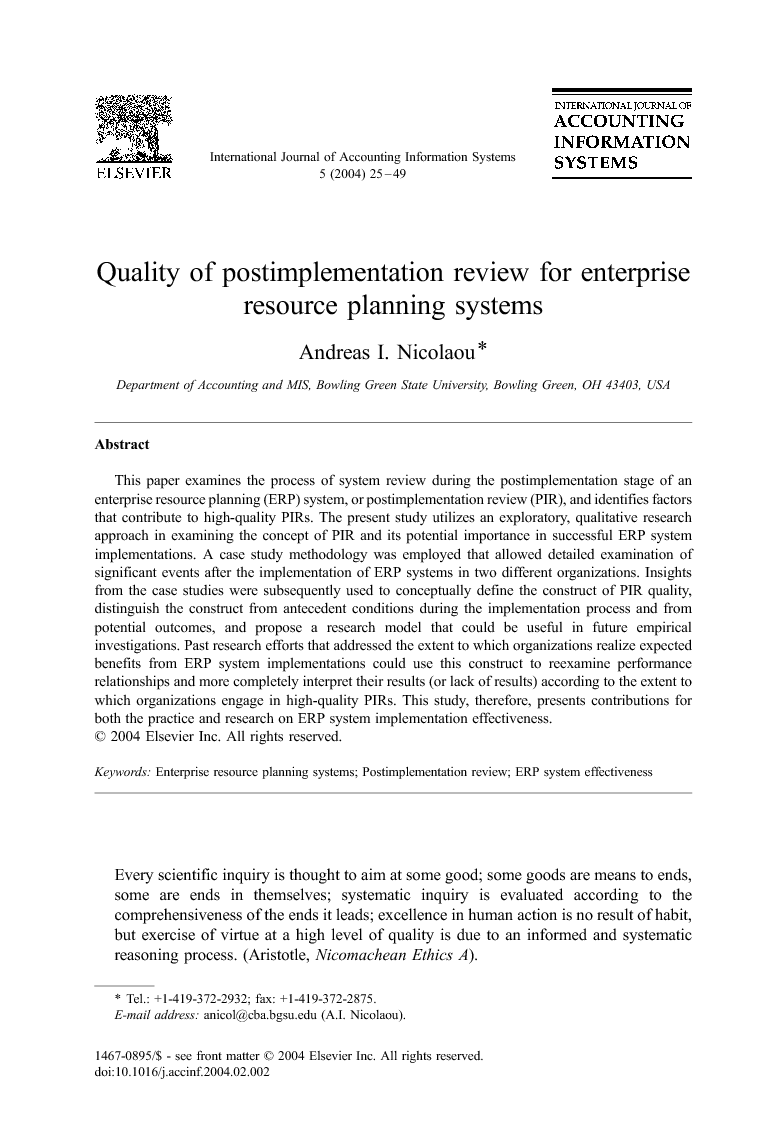 This paper examines the process of system review during the postimplementation stage of an enterprise resource planning (ERP) system, or postimplementation review (PIR), and identifies factors that contribute to high-quality PIRs. The present study utilizes an exploratory, qualitative research approach in examining the concept of PIR and its potential importance in successful ERP system implementations. A case study methodology was employed that allowed detailed examination of significant events after the implementation of ERP systems in two different organizations. Insights from the case studies were subsequently used to conceptually define the construct of PIR quality, distinguish the construct from antecedent conditions during the implementation process and from potential outcomes, and propose a research model that could be useful in future empirical investigations. Past research efforts that addressed the extent to which organizations realize expected benefits from ERP system implementations could use this construct to reexamine performance relationships and more completely interpret their results (or lack of results) according to the extent to which organizations engage in high-quality PIRs. This study, therefore, presents contributions for both the practice and research on ERP system implementation effectiveness.

Information systems (IS) development has been conceptualized in past research as a process that leads to a decision about the choice, design, and development of an information system (e.g., Nicolaou, 1999). Past research findings suggest that the effectiveness or success of an information system depends on a variety of factors, most importantly those relating to the extent of user participation and involvement in system development, the extent of business process and needs assessment during the analysis stage of the systems development process, and the level of data integration designed into the system (e.g., Govindarajan and Fisher, 1990, Zaheer and Venkatraman, 1994 and Nicolaou, 2000). In a similar fashion, researchers in the fields of accounting and management decision making have promoted the shared assumption that a better designed information system would contribute to the efficiency with which organizational functions are carried out and the effectiveness of attaining desired outcomes Galbraith, 1995 and Zimmerman, 1995. Consequently, the factors that influence the process of system development would also have a significant effect on both organizational performance and user perceptions about the system after its implementation and continued use in an organization, that is, during its postimplementation stage. The postimplementation stage in a system's life cycle encompasses a number of processes that are critical for a system's success. Following the implementation of the system, an organization would engage in a number of activities, such as postimplementation review (PIR), support, and maintenance (e.g., Gelinas and Sutton, 2002). The focus of this paper is on the process of PIR, which entails analyzing the project to determine what was successful and what needs to be improved with regard to the system or with regard to the implementation process itself Burch, 1992, Cerullo, 1982 and Gelinas and Sutton, 2002. Although past literature has provided a useful descriptive analysis of the PIR process Benchmarking Partners, 1998, Holland and Light, 2001, James and Wolf, 2000 and Peterson et al., 2001, the focus has mostly been on the development of stage models that describe a set of sequential activities useful for the planning of future actions and not on the examination and understanding of factors that contribute to process effectiveness. In a stage model of system development, the quality of a PIR is heavily dependent on the quality of the implementation process itself and on its effectiveness to influence appropriate modifications or enhancements that can improve the performance of the system or improve the project management and system development processes. With the recent expansion in the number of organizations using enterprise-wide systems, including both large and small organizations, and the Web-based capabilities they now offer, the successful implementation of these systems has become a critical issue. In addition, a very significant investment in resources is required for the implementation of enterprise resource planning (ERP) systems, while the realization of system benefits is reported to significantly lag expectations Benchmarking Partners, 1998, META Group, 1999 and Peterson et al., 2001. As a result, the issue of PIR and its potential effect on the realization of potential system outcomes provides a new area of research of significant interest to both researchers and practitioners and provides a solid motivation for the present study. This paper examines issues that contribute to high-quality PIRs in ERP systems. The study explores the concept of PIR and attempts to develop a conceptual definition of high-quality PIRs. As the PIR process cannot exist independently of the system implementation process, a number of implementation factors will be explored that should be the focus of review on a postimplementation basis. The study utilizes an exploratory, qualitative research approach in examining the concept of PIR and its potential importance in successful ERP system implementations. As the quote from Aristotle's Nicomachean Ethics implies, high-quality concepts require systematic inquiry that addresses a comprehensive set of dimensions. A clear articulation of this concept will help enhance our understanding of the system development process in ERP systems. The study reported in this paper employed an exploratory qualitative method to accomplish this objective. Two organizations were examined in detail with regard to their PIR activities and useful insights were derived relating to the extent that specific review activities were important for a successful ERP implementation effort. This study, therefore, can provide contributions for past research in that the frameworks developed in past studies can be reexamined to include the concept of PIR quality as an important condition that moderates the attainment of system success/process outcomes. Furthermore, the quality of the PIR process could represent a key element in the examination of the relationship between system implementation and the realization of anticipated benefits from the use of ERP systems. The remainder of this paper is organized as follows. The next section reviews literature that examines the implementation of ERP systems and the necessity for carrying out PIRs. The following section explains the qualitative research method adopted for this study and presents case study evidence that relates to the constructs of the study. A proposed conceptual definition of the quality of the PIR process is then developed which is consistent with both prior research and the case study evidence presented in the earlier section. The paper concludes with recommendations for future research.

This study has examined the empirical and professional literatures in ERP implemen- tation and has also reported on a case study to further explain and substantiate the implementation process phenomena that were advocated in the literature. A general research proposition was advanced, which advocates that a relationship exists between the degree of quality in PIR carried out by an organization and the extent to which the organization attains desirable system outcomes. This research proposition should be empirically examined in future research to test the validity of the proposed concepts and determine the strength of their association. The insights from the study have been used to conceptually define the construct of PIR quality and develop an overall conceptual model, which proposes potentially important conditions that influence the extent to which an organization could attain desired outcomes from an ERP system implementation. Conceptually, PIR could be defined by determining the extent to which an organization carries out a planned set of review/evaluation activities on a postimplementation basis, which relates to the following five dimensions: (a) review of overall project scope and planning; (b) review of driving principles for project development; (c) evaluation of misfit resolution strategies; (d) evaluation of attained benefits; and (e) evaluation of user and organizational learning. Each of these five PIR dimensions could be further examined in future studies, where operational measurement items can be developed and data on such specific items can be collected from firms that had adopted and deployed ERP systems in their organizational environments. These empirical measurements can then be tested to determine the validity of construct measurement in terms of construct representativeness, internal reliability of measurement, and discriminating ability in distinguishing the quality of PIR construct from its antecedent conditions and potential outcomes. System benefits identified in the prior literature (e.g., Benchmarking Partners, 1998; META Group, 1999; O’Leary, 2000; Peterson et al., 2001 ) could be used as performance indicators for desirable ERP systems outcomes. Past research in systems implementationhas had difficulty in identifying positive returns on the investment of ERP systems (e.g., META Group, 1999; Poston and Grabski, 2001 ); furthermore, there is an entire literature on the so-called IT productivity paradox, where studies found little or no evidence of a relation between IT investment and firm performance (e.g., Barua et al., 1995; Brynjolfs- son, 1993; Weill, 1992 ) or productivity (Loveman, 1988; Roach, 1987) . In ERP systems, the difficulties associated with accurately predicting benefits could arise from implemen- tation deficiencies and shifting business requirements, both of which could only be exacerbated by the pressure to go live (Peterson et al., 2001) . A postimplementation effort that is solely directed to identify shortcomings and address deficiencies cannot contribute to the establishment of those conditions that enable organizations to generate better returns for their investments. The level of quality in PIR, therefore, as it was articulated in this research, could enhance our understanding of the ERP implementation process and propose conditions under which an organization could realize anticipated benefits and attain other desired system and organizational outcomes. Past research that advocates the universality of a productivity paradox in IT investments in general or ERP systems in particular should therefore be reevaluated in light of the PIR quality construct. Future research could therefore empirically measure the extent to which organizations carrying out PIRs at varying levels of quality realize expected benefits with a varying degree of success. Future research could also examine the great number of different benefit types and develop clusters of benefits that could be more directly associated with an organization’s long-term success. The actual process of PIR could also be further examined in future research to determine the timing of the PIR process, the nature of communication that is carried out throughout the process and how that impacts the attainment of each of the five dimensions identified here, the level of involvement of users, internal auditors or management in the process, and the level and extent of documentation that is required in the process. Although the present study presents ‘‘first’’ evidence on the nature of those factors that critically determine the level of quality in the process, it does not delimit the actual process of PIR and its comprising elements. As a result, this remains an important issue for future research. In conclusion, this study has attempted to explore the quality of PIR construct, define the conceptual boundary of this construct, and suggest a general conceptual model that could be useful for both the practice and research on ERP implementation effectiveness. The lack of prior empirical findings in this area lends additional importance to such a research effort that explores potentially significant constructs and defines conceptual boundaries that could contribute to future empirical investigations.