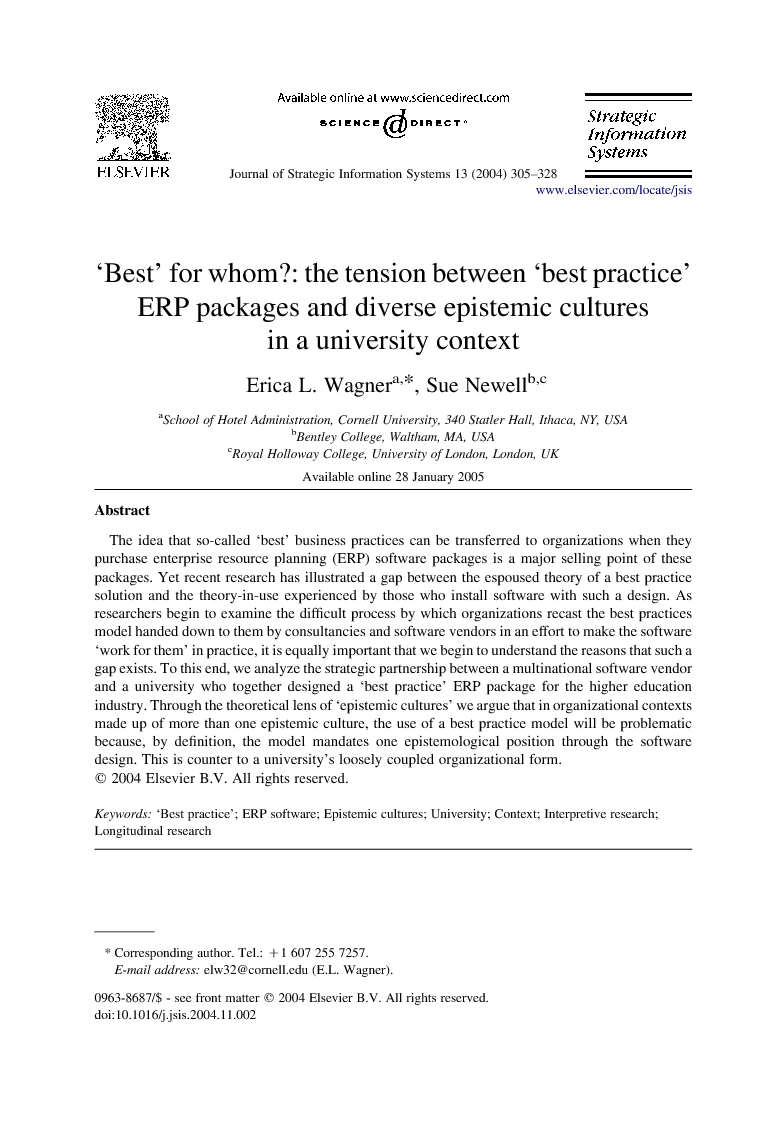 The idea that so-called ‘best’ business practices can be transferred to organizations when they purchase enterprise resource planning (ERP) software packages is a major selling point of these packages. Yet recent research has illustrated a gap between the espoused theory of a best practice solution and the theory-in-use experienced by those who install software with such a design. As researchers begin to examine the difficult process by which organizations recast the best practices model handed down to them by consultancies and software vendors in an effort to make the software ‘work for them’ in practice, it is equally important that we begin to understand the reasons that such a gap exists. To this end, we analyze the strategic partnership between a multinational software vendor and a university who together designed a ‘best practice’ ERP package for the higher education industry. Through the theoretical lens of ‘epistemic cultures’ we argue that in organizational contexts made up of more than one epistemic culture, the use of a best practice model will be problematic because, by definition, the model mandates one epistemological position through the software design. This is counter to a university's loosely coupled organizational form.

Increasingly, contemporary organizations are choosing to purchase standard software products that are designed based on business practices that have been deemed the most appropriate for achieving organizational goals. This so-called ‘best practice’ model has a long history (Newell et al., 2000) and is currently popularized in the form of enterprise resource planning (ERP) packages, arguably the most popular business software of the last 15 years (Robey et al., 2002). ERP products offer the integration of business processes and functions across the organization based on a way of working deemed ‘the best’ for particular industries by software vendors, management consultants and industry-based experts (Lee and Lee, 2000; Shanks and Seddon, 2000). Organizations adopting ERP software need to configure the software to meet their local needs but are encouraged to adopt the ‘vanilla system’ (that is without modifications) since the ‘best’ industry practices are supposedly embedded in this standard configuration. These ‘best’ practices are typically designed with a software company working in a partnering relationship with a key industry customer to develop a package to meet the unique requirements of a particular industry. In this paper we focus on the university sector. Despite the popularity of ERP packages, recent research has illustrated a gap between the espoused theory of a best practice solution and the theory-in-use experienced by those who install software with such a design (Shanks and Seddon, 2000; Robey et al., 2002). As researchers begin to examine the difficult process by which organizations recast the best practices model handed down to them by consultancies and software vendors in an effort to make the software ‘work for them’ in practice (Willcocks and Sykes, 2000), it is equally important that we begin to understand the reasons why such a gap exists. In this paper we argue that the reason for this gap is in part due to the best practice design itself which limits different theories of work from flourishing within a single organizational context. We use the concept of epistemic cultures (Knorr-Cetina, 1999) to explore the diversity of practices within a university context. We pose the research question: is it possible to identify a standard ‘best practice’ in a context characterized by users from diverse epistemic cultures? In considering this question, we focus on intra-organizational diversity, rather than inter-organizational diversity that has been the previous focus of ‘best practice’ critiques (e.g. Clark and Staunton, 1989). Szulanski (1996) considers the challenges of transferring best practices within organizations from a knowledge perspective. He identifies a number of factors, including the inability of the recipient to absorb the best practice based on their world view, an absence of ‘knowing why’ something is to be done in a particular way, and finally a difficult relationship between the parties involved in the transfer. However, this study does not provide an explanation for why such knowledge-related barriers occur nor does it offer guidelines for handling such impediments. The results from our case analysis highlight how the context of practice influences what is ‘best’ such that a single organizational ‘best practice’, as promoted within ERP packages, is problematic. We conclude that while software vendors recognize the industry context as influencing the appropriate ‘best’ practice design of an ERP system, they fail to acknowledge how the contextual specificity within an organization makes it difficult if not impossible to meet all users’ needs with a standard organizational solution. Section 1 has introduced the study and shown its relevance. The remainder of the paper is organized as follows: Section 2 frames our research by introducing the background and objectives of the study. Having presented the landscape inspiring the study's research questions, Section 3 reviews our research methodology and empirical design. The main body of the paper begins with the case description in Section 4, followed by the analysis of empirical data. The paper concludes with a discussion and suggestions for future research.

In contemporary society the traditional academic institution of the university is struggling with its identity 1995 ). Whilst the joint missions of research and teaching may remain unchanged, the context in which these activities are to be conducted is dramatically changing. Professional managers are running universities in North America, Western Europe and Japan in an effort to compete within a higher education marketplace that has grown increasingly complex and competitive over the past ten years ( Barnett, 2000 ; Gumport, 2000 ; Brennan et al., 1999 ; Silver and Silver, 1997 ). Information technology is seen as playing a central role in this professionalization agenda. For example, Agre (2000) argues for ‘the potential to create a university which is connected to all other universities around the globe’ by employing technology as an incentive for integration. Agre’s perspective gives voice to the university as part of a collective that must professionalize its practices in a standard way if it hopes to be perpetuated as a bastion of contemporary society. In the following quotation we understand the crux of Agre’s argument related to standardization: “The key [for universities] is to preserve information by standardizing everything that does not make a difference . The great opportunity here lies in the efficiencies that are to be gained by standardizing and networking all of the practices, in accounting systems for example, whose difference make no important difference to the local circumstances of a given campus.” [p. 499] In this paper we explore the impact of these standardizing practices. Standardizing accounting practice within Ivy involved disrupting many silos of activity that were valued by powerful faculty. While central leadership were informed by a standardization perspective, we saw that shifting the practice of accounting within Ivy was far from unimportant for faculty who relied on flexible reporting practices. In fact this seemingly unimportant change in accounting practice attempted to epistemologically reorder the university work. Through the theoretical lens of ‘epistemic cultures’ ( Knorr-Cetina, 1999 ) we have argued that in organizational contexts made up of very diverse epistemic cultures, the use of a standardizing best practice model will be problematic because, by definition, the model mandates one epistemological position through the software design. This is counter to the university’s loosely coupled organizational form which is underpinned by semi- autonomous reporting relationships. We conclude that, in a context where you have diverse user groups, with different work practices and epistemic cultures ( Knorr-Cetina, 1999 ), and with different levels of background experience, a single industry solution is not going to be ‘best’ from all perspectives. True, the ERP development alliance between Ivy and Vision resulted in a ‘best practice’ product which is being marketed on the vendor’s international web site as their ‘higher education industry solution’ appropriate for universities across cultural and geographical contexts. However, what Vision’s software product literature doesn’t tell is that Ivy is still radically customizing its business processes, organizational structure, and ERP technology in an effort to create a local information system that meets the needs of both the administrative and academic cultures that coexist within Ivy. We have shown how the problem stemmed from the fact that there were differences between faculty and administrative agendas in relation to their needs for information related to grants and contracts. We have shown that these differences were such that the enterprise systemdefined and developed to represent ‘best practice’ during this software-university partnership to develop the industry standard, met the needs of only one of the constituent users—the central administrators. Thus, somewhat ironically, even in the site where the so-called ‘best practice’ was developed, the university eventually resorted to modifying the standard in order to ensure that the faculty actually co-operated in the system use. In other words, using the vanilla organization-wide system was not adhered to, even in the site where the ‘best practice’ was initially defined. The likelihood that this ‘best practice’ will be adopted as standard across other sites is perhaps even less likely. In conclusion, the main goal of this study has been to challenge the normative definition of software products providing a shortcut to business excellence. We have seen that what is defined as exceptional work practices for one group, flies in the face of another equally important group of interests. Our interpretive research design foregrounds the notion that truth claims are relative and as such, we have sought to foreground this subjectivity by presenting different interpretations of what is best . The official story of a software project which is recorded in organizational documentation and reflected in the ’best practice’ design, represents the dominant interpretation of the initiative, but it does not represent what ‘really happened’. Unless one believes that power indicates superiority, the notion of ’best practice’ can only ever mean the dominant perspective