عنوان انگلیسی
From means to ends: The transformation of ERP in a manufacturing company
دانلود فوری مقاله + سفارش ترجمه 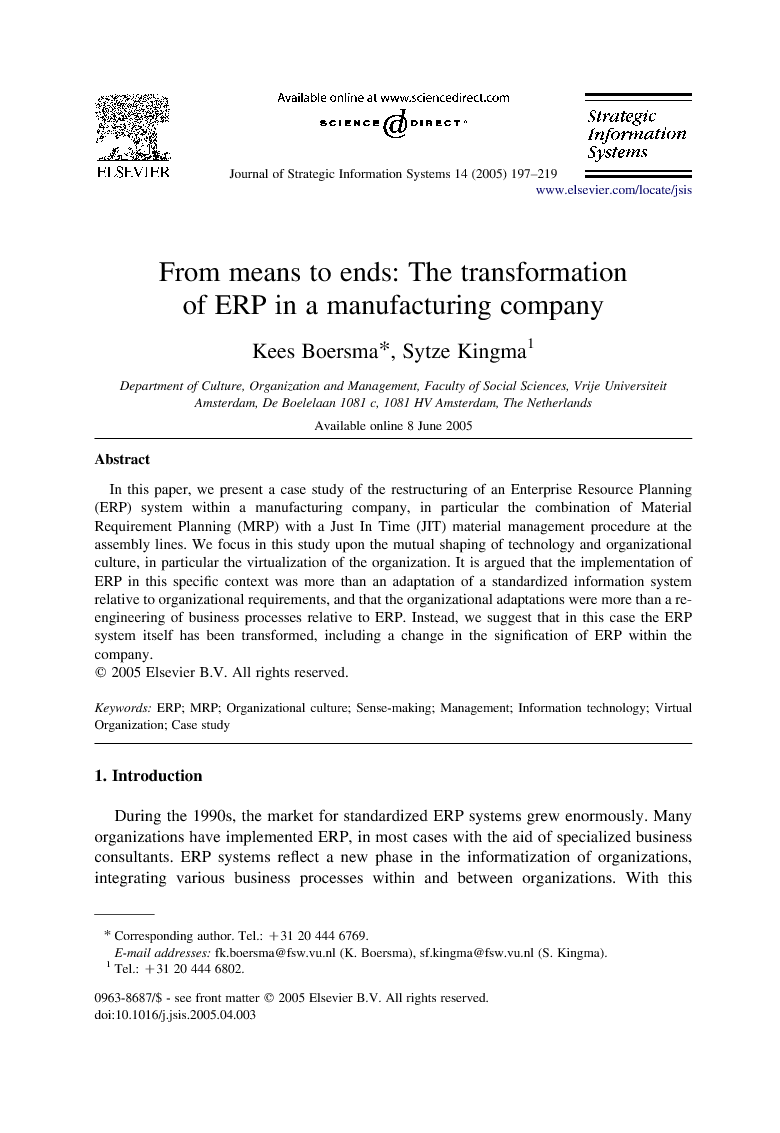 In this paper, we present a case study of the restructuring of an Enterprise Resource Planning (ERP) system within a manufacturing company, in particular the combination of Material Requirement Planning (MRP) with a Just In Time (JIT) material management procedure at the assembly lines. We focus in this study upon the mutual shaping of technology and organizational culture, in particular the virtualization of the organization. It is argued that the implementation of ERP in this specific context was more than an adaptation of a standardized information system relative to organizational requirements, and that the organizational adaptations were more than a re-engineering of business processes relative to ERP. Instead, we suggest that in this case the ERP system itself has been transformed, including a change in the signification of ERP within the company.

During the 1990s, the market for standardized ERP systems grew enormously. Many organizations have implemented ERP, in most cases with the aid of specialized business consultants. ERP systems reflect a new phase in the informatization of organizations, integrating various business processes within and between organizations. With this organizations usually seek to improve management control over complex business processes, an increasing efficiency and effectiveness and a reduction of production and transaction costs (Davenport, 1998, Dong, 2001 and Holland and Light, 2001). In this respect, ERP was advocated and welcomed as highly promising. However, after this initial and very promising phase, since the end of the 1990s the enthusiasm over ERP was seriously tempered, due to the substantial exceeding of time-and money budgets, technical failures, the loss of control over business processes and organizational side effects (Hanseth et al., 2001 and Trott and Hoecht, 2004). Instead of a highly promising technology, ERP appears to be a highly demanding technology. Problems associated with ERP are, at least in part, attributed to an underestimation of the social and cultural side of ERP (Alvarez and Urla, 2002, Fui-Hoon Nah et al., 2001, Kawalek and Wood-Harper, 2002 and Soh et al., 2002). In this paper, we focus upon the mutual shaping of ERP and organizational culture in the case of a complex B2B (business-to-business) vehicle manufacturing company.2 We address, in particular, the quite dramatic management decision, made in early 2001, to exclude the entire Material Requirement Planning (MRP) module from the ERP system, and the impact the new Just In Time (JIT) management procedures had on the working routines of the teams operating at the assembly lines. This remarkable development indicated a serious misfit between the organization and its Enterprise System and suggests that the role of technology can be inverted from leading to following organizational change. First, we sketch the theoretical background to this case study. In this part of the paper, we will address the interplay of organizational culture with ERP as a process of sensemaking. We further specify this process of sensemaking in reference to the virtualization of the organization driven by ERP. In our focus upon the mutual shaping of technology and organizational culture, we combine a body of literature referring to the ‘Social Shaping of Technology’ (MacKenzie and Wajcman, 1999 and Orlikowski, 2000) with theories of organizational culture (Alvesson, 2002, Czarniawska, 1998 and Martin, 2002Weick, 1995). In the second part, we move to the organizational context of the manufacturing company and the management of the organizational changes following the decision to work around MRP. After that we analyse the implications for the teams working at the assembly lines. In the conclusion of this paper, we discuss (in line with our theoretical framework) how in this case the transformation of ERP can be seen as process of sensemaking and how it added up to a virtualization of the organization. We will argue why the process in which the ERP system was amended entailed in our view a serious transformation in the signification of the ERP system itself.

With this article about ERP in a vehicle manufacturing company we wanted to make a clear case for the cultural and contextual analysis of ERP. We have seen how ERP became problematic in the context of organizational changes at TransPort.As a consequence this technology has been problematized, in particular the black box of MRP was opened. The production crisis at TransPort can itself be presented as a highly specific and localized part of a more general change in the understanding of ERP, from a primarily promising technology to a highly demanding one, stressing the organizational pre-conditions and consequences of this technology. Also, we explicitly addressed the mutual shaping of technology and organizational culture. We analysed in particular how processes of sensemaking ( Weick, 1995 ) are deeply involved in situational definitions of ERP, in the signification of ERP throughout the entire organization and in the construction of interfaces between the virtual system and its material environment. Regarding this last point we have specified the organizational changes at TransPort as a virtualization of this organization ( Sotto, 1997; Shields, 2003 ). We have stressed the paradoxical relationship between the virtual system and its material context. After all, while the implementation of information technology is often meant to replace more physical parts of the company, this technology at the same time places new demands on the material context. The virtualization of TransPort can of course be explained in different ways. In our view there are two extreme and opposing explanations. On the one hand, it can be argued that ERP systems are flexible and adaptable to various organizational situations. This can be done by setting parameters within the system or developing specific software customizations. A basic problem we have with this interpretation in our case is that the Kanban system required significant cultural and organizational changes within the factory, which were developed only after MRP was shut down. The exclusion of MRP from the ERP system can hardly be seen as the adaptation of a system to existing organizational structures. On the other hand ERP has also been closely associated with Business Process Re- engineering (BPR). ERP is sometimes even seen as an almost deterministic element, forcing organizations to adapt to the logic of the enterprise system ( Baskerville and Smithson, 1995; Koch, 2001 ). From this perspective the development of a new Kanban logistical system for the assembly lines can be interpreted as an adaptation of the organization to the enterprise system. A basic problem we have with this interpretation in our case is that the logistical principle or the ‘script’ of MRP is quite different from Kanban. The new Kanban procedures and working routines can therefore hardly be seen as following the rationale of the original ERP system. Because of the problems we have with these extreme and contradictory explanations, we suggest a third and combinatory explanation, which focuses upon the transformation of ERP and the organization itself. We suggest that the function and meaning of ERP within TransPort has changed significantly, ultimately leading to a new kind of virtualized organization in which the material organization and the information technology define each other.