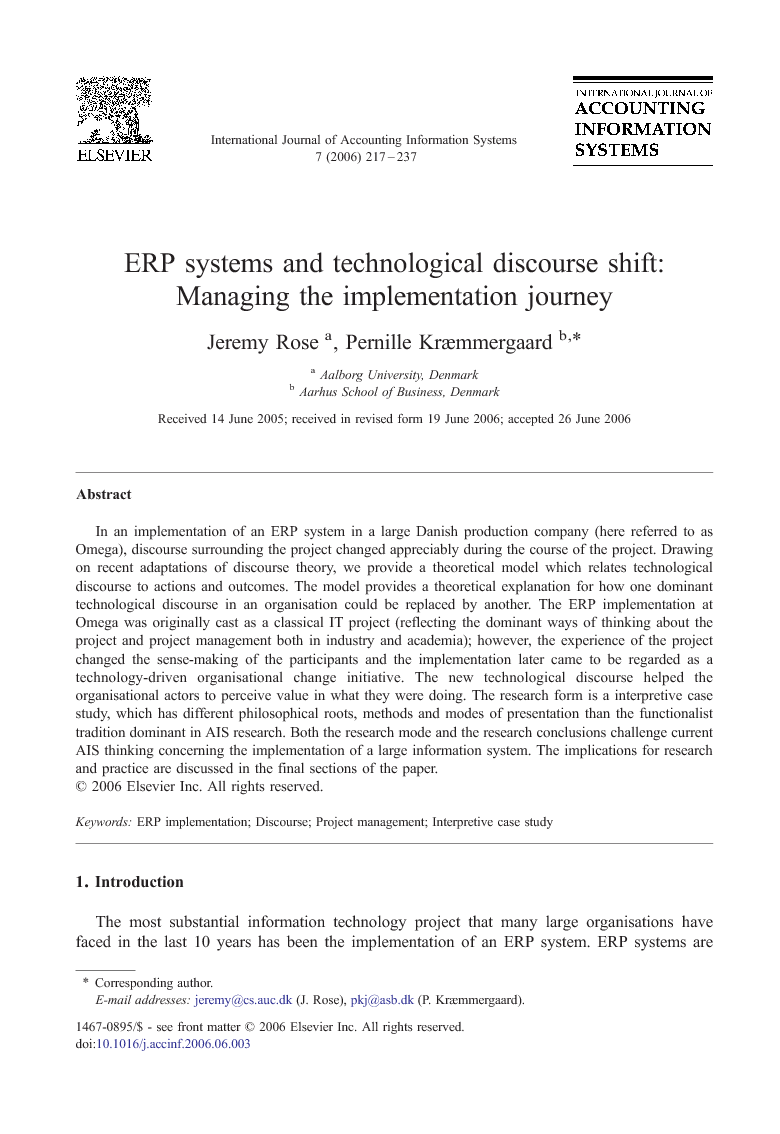 In an implementation of an ERP system in a large Danish production company (here referred to as Omega), discourse surrounding the project changed appreciably during the course of the project. Drawing on recent adaptations of discourse theory, we provide a theoretical model which relates technological discourse to actions and outcomes. The model provides a theoretical explanation for how one dominant technological discourse in an organisation could be replaced by another. The ERP implementation at Omega was originally cast as a classical IT project (reflecting the dominant ways of thinking about the project and project management both in industry and academia); however, the experience of the project changed the sense-making of the participants and the implementation later came to be regarded as a technology-driven organisational change initiative. The new technological discourse helped the organisational actors to perceive value in what they were doing. The research form is a interpretive case study, which has different philosophical roots, methods and modes of presentation than the functionalist tradition dominant in AIS research. Both the research mode and the research conclusions challenge current AIS thinking concerning the implementation of a large information system. The implications for research and practice are discussed in the final sections of the paper.

The most substantial information technology project that many large organisations have faced in the last 10 years has been the implementation of an ERP system. ERP systems are pre-programmed, and the major activities of an ERP implementation are not the traditional development activities of systems analysis, design and programming, but system configuration, implementation and organisational development. Though organisations often set up a classical IT project to introduce an ERP system because this is what they know best, these implementations are beset with many problems (Holland and Light, 1999, Davenport, 2000, Markus et al., 2000, Ross and Vitale, 2000 and Shanks et al., 2000). Traditional IT project problems such as late delivery and cost overrun are exacerbated by the scale of the projects, and ERP implementations can, in addition, cause major disruption to the operations of the company, to the extent that the financial viability of the company can be threatened. In the classical IT project, the linear, phase-oriented, time-delimited change exercises, planned beforehand through rational analysis and strictly controlled against time schedules and budgets, lead to financial gains for the company (Weis and Wysocki, 1994, McCarthy, 1995 and McConnell, 1998). Projects are system-led (focusing on technology problems) rather than business-led. This way of understanding IT project is based on an instrumental rational logic, or what Burrell and Morgan (1979) call the functionalist paradigm, and has dominated the studies of ERP systems within the AIS literature. Functionalist thinking is normally accompanied by a positivist research mode. Many AIS studies have focused on the economic viability of ERP system (Poston and Grabski, 2001, Hayes et al., 2001, Hunton et al., 2003, Nicolaou, 2004b and Dillard et al., 2005), whereas another set of AIS studies address organisational issues related to systems applications (O'Leary, 2002, Bradford and Florin, 2003 and Nicolaou, 2004a). According to Dillard et al. (2005), all these studies reinforce the instrumental rational logic paradigm and no alternatives to this decision frame are offered. In the organisation studied in this study (a Danish production company hereafter referred to as Omega), sense-making around the ERP implementation started with classical IT project thinking but was later replaced by an entirely different perspective. This paper uses a model of discontinuous shifts in sense-making derived from discourse theory to help study these phenomena and to specify the characteristics of the new discourse, referred to as a technology-driven organisational change initiative. Discourse theory is firmly established in the humanities tradition in Europe, but somewhat neglected in IS and AIS studies, particularly in America. Both the phenomenon studied and the theory base imply the social construction of (social) reality; therefore, an appropriate research mode is the interpretive case study approach. The objectives of the paper are the following. Firstly, it will establish a theoretical model of discontinuous shifts in technological discourse appropriate to the phenomenon studied. Secondly, it will investigate the change in the technology discourse surrounding the ERP implementation at Omega. Thirdly, it will develop and illustrate an alternative to the classical IT project management discourse. Finally, it will discuss the implications for research and practice of this alternative technology management discourse. The remainder of the paper is organised as follows. The next section presents the theoretical foundations of the paper, from which the theoretical model is argued. The resulting theoretical model is given in Section 3. Section 4 outlines the methodology used in the case study and the analysis, followed by the case history of the ERP implementation at Omega, is presented in Section 5. Section 6 analyses the case against the theoretical model. 7 and 8 address the implications of the results for research and practice. Conclusions are drawn in Section 9.

The objectives of the paper were threefold: (1) to establish a theoretical model of discontinuous shifts in technological discourse appropriate to the phenomena studied; (2) to investigate the change in the technology discourse surrounding the ERP implementation at Omega; (3) to develop and illustrate an alternative to the classical IT project management discourse. In response to the first objective, we argued a theoretical model of discontinuous shifts in dominant technology discourses, in which the dominant technology discourse was related to actions and outcomes which could be interpreted by actors as congruent or incongruent. The model provides a theoretical explanation for how one dominant technological discourse in an organisation could be replaced by another. Though not a substantial contribution to discourse theory, the model contributes to AIS research by providing an accessible discourse-based model focusing on technology and on change. Neither the theoretical domain nor the research mode is particularlyfamiliar in AIS research and the research focus contributes to an expansion of the range of possible future studies in the AIS field. In response to the second objective, the model was used in an iterative process of data collection and analysis in an interpretive case study illustrating the change in discourse during the implementation of an ERP system in the Danish company Omega. The analysis shows how one dominant technology discourse (classical IT project) was challenged by major incongruence in its outcomes and replaced in the organisation by another (technology-driven change initiative). The final objective was to develop and illustrate an alternative to the classical IT project discourse. Classical IT project management, in our analysis, is based on the instrumental rational logic characteristic of functionalism — also the dominant paradigm in AIS research. Within this discourse technology, implementation is understood as an activity taking place within a given timeframe, which should and can be planned in advance by rational analysis, where the emphasis is on controlling the implementation in relation to the pre-defined plans. The success criteria in this discourse are on time and within budget completion, and the goal is efficiency which can be evaluated by traditional economic indicators such as return on investment. In the alternative discourse, which became the dominant discourse within Omega during the implementation, the implementation is understood as an evolutionary process – or an ERP journey – affecting organisational life, which should respond to changing objectives, conditions and unfolding circumstances. The guiding logic within this discourse is that the implementation is complex and therefore difficult to plan in advance, and the management of the implementation should therefore rely on evolving best guesses. The success criteria are organisational learning and continual development of the ERP system. We also argue that this second discourse is less inherently functionalist in character. For many companies, a significant part of the problems associated with the implementation of ERPsystemsliesintheareaofprojectmanagement( Weston, 2001 ).Wearguethatthishastodowith theclassicalwayofmanagingITprojects.ManaginganERPprojectisnotthesameasimplementing a small scale ITsystem( Ghosh,2002 ).We offer practical suggestions for the managementofanERP system as a technology-driven change initiative in the areas of scope, change, budgeting, planning and staffing. Researching an inherently less functionalist account of an ERP system implementation implies some research challenges for the AIS field. Where the research focus is on organisational change, actors' perceptions of evolving conditions, emergent planning in this face of multiple objectives, unforeseeable resource demands and changing subjective criteria for success, then theories based on the social construction of reality and interpretive and critical research methods become appropriate research approaches. These methods are likely to produce different, but fresh and challenging insights to stimulate AIS research and can provoke functionalist researchers to reconsider and improve the premises behind their work.