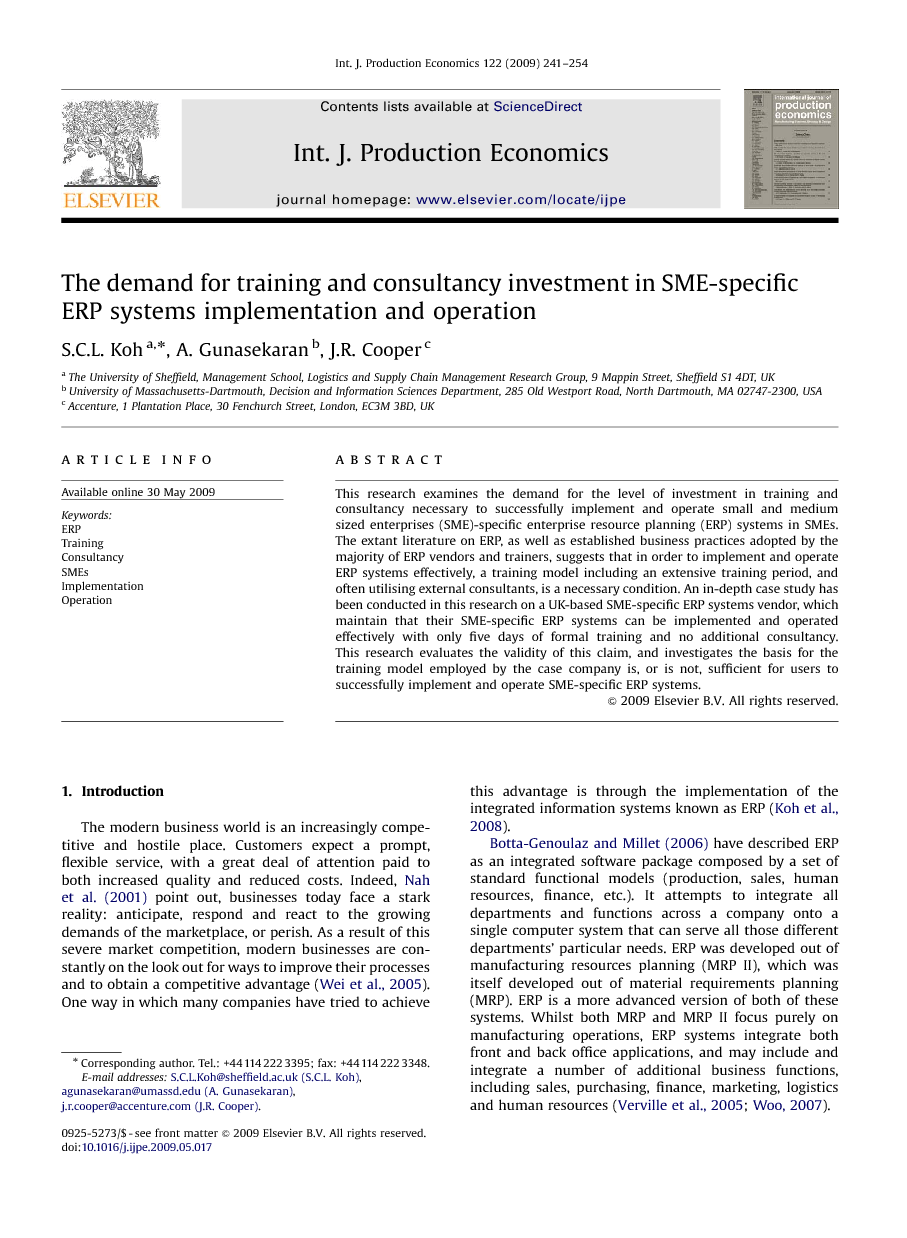 This research examines the demand for the level of investment in training and consultancy necessary to successfully implement and operate small and medium sized enterprises (SME)-specific enterprise resource planning (ERP) systems in SMEs. The extant literature on ERP, as well as established business practices adopted by the majority of ERP vendors and trainers, suggests that in order to implement and operate ERP systems effectively, a training model including an extensive training period, and often utilising external consultants, is a necessary condition. An in-depth case study has been conducted in this research on a UK-based SME-specific ERP systems vendor, which maintain that their SME-specific ERP systems can be implemented and operated effectively with only five days of formal training and no additional consultancy. This research evaluates the validity of this claim, and investigates the basis for the training model employed by the case company is, or is not, sufficient for users to successfully implement and operate SME-specific ERP systems.

The modern business world is an increasingly competitive and hostile place. Customers expect a prompt, flexible service, with a great deal of attention paid to both increased quality and reduced costs. Indeed, Nah et al. (2001) point out, businesses today face a stark reality: anticipate, respond and react to the growing demands of the marketplace, or perish. As a result of this severe market competition, modern businesses are constantly on the look out for ways to improve their processes and to obtain a competitive advantage (Wei et al., 2005). One way in which many companies have tried to achieve this advantage is through the implementation of the integrated information systems known as ERP (Koh et al., 2008). Botta-Genoulaz and Millet (2006) have described ERP as an integrated software package composed by a set of standard functional models (production, sales, human resources, finance, etc.). It attempts to integrate all departments and functions across a company onto a single computer system that can serve all those different departments’ particular needs. ERP was developed out of manufacturing resources planning (MRP II), which was itself developed out of material requirements planning (MRP). ERP is a more advanced version of both of these systems. Whilst both MRP and MRP II focus purely on manufacturing operations, ERP systems integrate both front and back office applications, and may include and integrate a number of additional business functions, including sales, purchasing, finance, marketing, logistics and human resources (Verville et al., 2005; Woo, 2007). These functionalities can have significant benefits for companies who manage to successfully implement and operate the software. Indeed, these systems have the ability to help organisations to overcome the coordination and information problems that can accompany “local” systems1 (Giachetti, 2004), and consequently, authors such as Bendoly and Jacobs (2004), Loh and Koh (2004) and Woo (2007), have argued that ERP has the potential to reduce inventory levels, reduce costs, lower lead-times, increase productivity, facilitate corporate communication, improve information and decision making capabilities, and improve customer service. Such functionalities have led Ketikidis et al. (2008) to conclude that ERP systems offer the potential for companies to increase their competitive advantage and gain market share. As a result of these potential advantages, a growth in the ERP market has taken place in recent years, and an increasing number of SMEs have attempted to implement and operate these systems (Loh and Koh, 2004). Traditionally, ERP has been a solution primarily provided by large vendor companies such as SAP and Oracle, and purchased and implemented by large, often multi-national, firms. However, Raymond (2005) has argued that the increasingly competitive nature of the business world is forcing many SMEs to adapt and change their processes, and that integrated information systems are being increasingly seen as an attractive way to do this. This recognition of a need for change in many SMEs has been facilitated by the emergence of SME-specific ERP system vendors providing less costly and less complex systems, aimed at catering specifically to the technological needs of SMEs (Muscatello et al., 2003; Loh and Koh, 2004; Buonanno et al., 2005; Koh et al., 2006). SME-specific ERP system refers to mid-range ERP systems designed for smaller businesses. Indeed, several large ERP vendors have recognised the growing demand for SME-specific ERP systems catered to the needs of SMEs, and this recognition has seen, amongst other systems, the release of “Business One” by SAP (www.sap.com) and “Oracle Accelerate” by Oracle. (www.oracle.com). However, despite this rise in SME-specific ERP systems adoption amongst SMEs, several barriers exist to the successful implementation and operation of these systems, and the literature is littered with examples of failed ERP projects (Davenport, 1998; Muscatello et al., 2003; Koh and Saad, 2004; Ehie and Madsen, 2005; Tchokogué et al., 2005; Koh and Saad, 2006). Indeed, due largely to issues related to the cost and complexity of these systems, ERP implementation and operation can be extremely difficult for a given organisation to achieve, and Muscatello et al. (2003) has reported that 40% of all ERP installations only achieve partial implementation and nearly 20% are scrapped as total failures. In response to these failures, many academics have studied the key issues, or critical success factors (CSFs), which contribute to ERP project success. As will be shown in the literature review, the overwhelming majority of these works list, explicitly or implicitly amongst these CSFs, the issues of both considerable user training and external consultancy as key factors for successful ERP implementation and operation, with some even going so far as to argue that improper training and support is a key reason for the failure of ERP projects (Motwani et al., 2005). These arguments raise an interesting point with regard to the training model employed by the case company in this research. This training model is based on only five days of formal training, and no additional consultancy, and yet the vendor claims that this level of training and support is sufficient to ensure the successful implementation and operation of its SME-specific ERP system. Therefore, a clear research need exists in this area. The objectives for this research are to: • Establish whether or not SME-specific ERP systems can be implemented and operated by SMEs with seemingly limited investment in formal training and no additional consultancy. • Establish if a short training model on SME-specific ERP systems is sufficient to ensure project success.