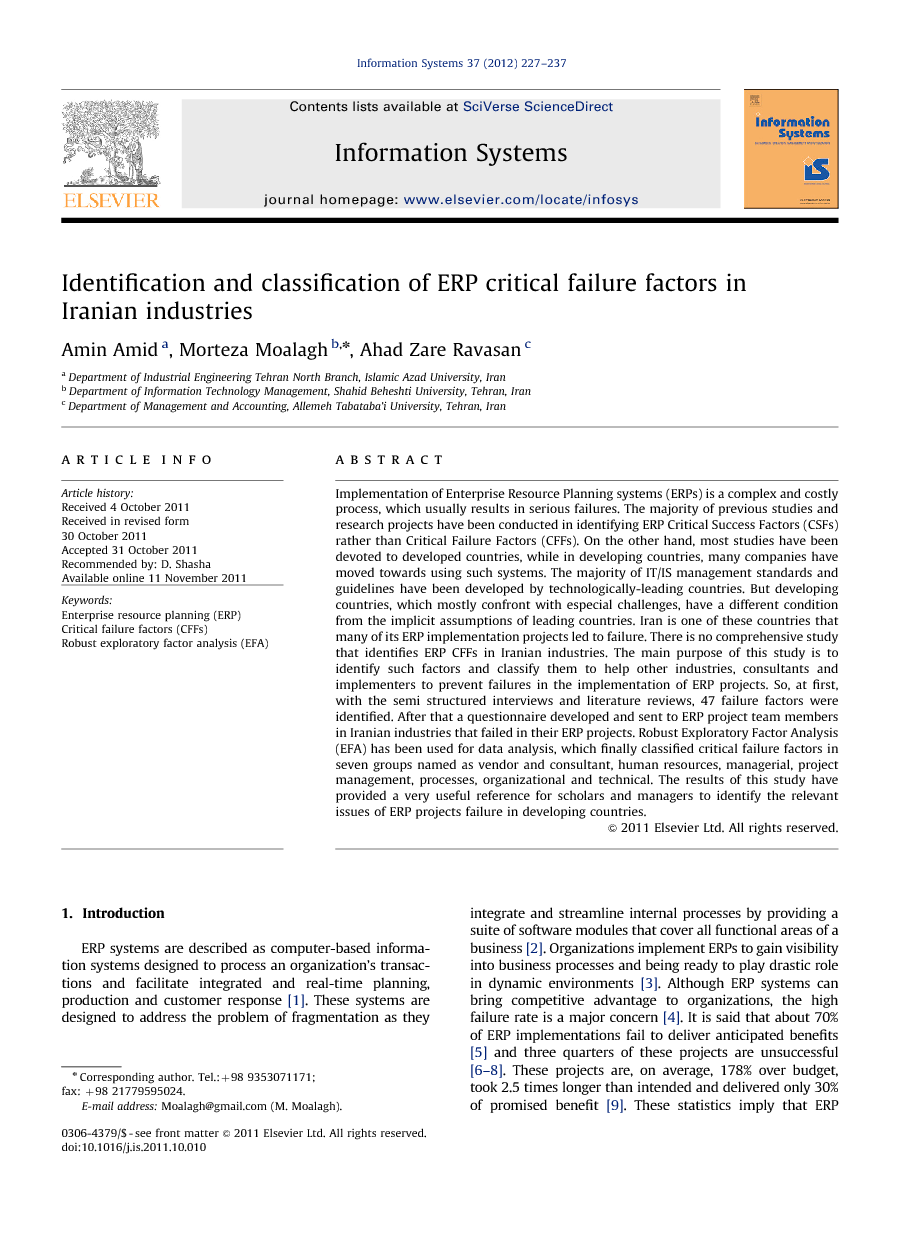 Implementation of Enterprise Resource Planning systems (ERPs) is a complex and costly process, which usually results in serious failures. The majority of previous studies and research projects have been conducted in identifying ERP Critical Success Factors (CSFs) rather than Critical Failure Factors (CFFs). On the other hand, most studies have been devoted to developed countries, while in developing countries, many companies have moved towards using such systems. The majority of IT/IS management standards and guidelines have been developed by technologically-leading countries. But developing countries, which mostly confront with especial challenges, have a different condition from the implicit assumptions of leading countries. Iran is one of these countries that many of its ERP implementation projects led to failure. There is no comprehensive study that identifies ERP CFFs in Iranian industries. The main purpose of this study is to identify such factors and classify them to help other industries, consultants and implementers to prevent failures in the implementation of ERP projects. So, at first, with the semi structured interviews and literature reviews, 47 failure factors were identified. After that a questionnaire developed and sent to ERP project team members in Iranian industries that failed in their ERP projects. Robust Exploratory Factor Analysis (EFA) has been used for data analysis, which finally classified critical failure factors in seven groups named as vendor and consultant, human resources, managerial, project management, processes, organizational and technical. The results of this study have provided a very useful reference for scholars and managers to identify the relevant issues of ERP projects failure in developing countries.

ERP systems are described as computer-based information systems designed to process an organization's transactions and facilitate integrated and real-time planning, production and customer response [1]. These systems are designed to address the problem of fragmentation as they integrate and streamline internal processes by providing a suite of software modules that cover all functional areas of a business [2]. Organizations implement ERPs to gain visibility into business processes and being ready to play drastic role in dynamic environments [3]. Although ERP systems can bring competitive advantage to organizations, the high failure rate is a major concern [4]. It is said that about 70% of ERP implementations fail to deliver anticipated benefits [5] and three quarters of these projects are unsuccessful [6], [7] and [8]. These projects are, on average, 178% over budget, took 2.5 times longer than intended and delivered only 30% of promised benefit [9]. These statistics imply that ERP projects are one of the most difficult system development projects. They are very complex projects and often require fundamental organizational changes. To avoid such costly failures and helping organizations better make use of their resources, much effort has been done by researchers. Some researchers have provided valuable insights into the process of ERP implementation [10], [11], [12], [13] and [14] and others identified a variety of critical factors affecting on the success or failure of the system [9], [15], [16], [17], [18], [19] and [20]. Most of these researches devoted to developed countries rather than developing countries because only 10–15% of global ERP sales belongs to developing ones [21]. However, it is beileved that these societies have become the dominant interest for major expansions of ERP implementations [22]. Although, it is assumed that organizations in different countries face similar difficulties and challenges as a consequence of the ERP package-organization misalignments, which were identified in the literature, but ERP implementations in developing countries confront specific difficulties that differ from those found in industrialized ones [23] and [24]. It is argued that most of ERP softwares have been developed technically in technologically-leading countries [25]. Moreover, considering that most of ERP systems are designed by western vendors and the structures and processes embedded in these systems reflect western processes and cultures. It is assumed that fundamental misalignments are likely to exist between the functions of western ERP systems and requirements of companies in developing societies whose structures and processes are greatly specific. As a result of these misalignments, ERP implementation failures tend to occur when companies in developing or under developed countries attempt to adopt foreign ERP systems [26]. Regarding the fact that many developing countries are now adopting ERPs and its unique implementation challenges, the subject of ERP Critical Failure Factors (CFFs) in these countries is of more interest among scholars. As an evidence of this claim, we could refer to studies conducted in the subject of ERP failure factors and implementation challenges in India [27], Saudi Arabia [28], China [26], Egypt [29], Tunisia [30], Malysia [31], Jordan [32], Oman [33] and Sri Lanka [34]. Iran is one of these developing countries that faced a dramatic increase in ERP penetration rate in recent years [35] confronting with crucial challenges and failures in ERP systems implementations. Despite the existing challenges in its ERP implementation projects, there is no comprehensive study, which investigated main failure factors of these systems in the context of Iranian industries. Hence, the purpose of this study is to explore the most important ERP CFFs in Iranian industries. Understanding these factors will deepen the perception of ERP implementations and help avoid implementation mistakes, thereby increasing the rate of ERP success in Iranian companies as a different cultural and structural context. Vast and complex number of success or failure factors affect on the implementation of ERP systems [36]. But most of researchers are interested in working on critical success factors (CSFs) as one of the most frequently used keywords in ERP systems publishing [37] and fewer ones intended to discover critical failure factors. These studies had presented that from 1998 to 2007, just six percent of all articles that were published or presented by prestigious journals and conferences in ERP topics assigned to CSFs [38]. But in the same period, the number of articles that published about ERP CFFs were less than one percent. It should be noticed that review and analysis of ERP failure experiences in the form of research projects is very valueable for avoiding the past mistakes [39]. Therefore, failure study and specifically CFFs in ERP system implementation can be expressed as a reasearching concern. Following an explanation of the ERP failure factors and Iran ERP market, ERP CFFs are identified and using questionnaire data, a model is provided for ERP CFFs classification in Iranian industries. On the basis of this model, some recommendations can be made to prevent from failure or avoid potential harms. In the final section, discussions are drawn about the implications of the new model and identified factors.

This paper, first, elaborated on the importance of ERP CFFs. It has been noted that one of the main problems in ERP projects, is focusing on technical and financial aspects of a project and neglecting to take into account the non- technical issues like people [70] , while many ERP studies indicate that failure is largely due to organizational and social, rather than technical factors. Therefore, in order to appropriately deal with this problem, in depth and com- prehensive studies is conducted to extract the most important ERP failure factors in the literature, which resulted in identifying 31 failure factors. Also, in order to consider ERP failure factors in the unique context of Iranian industries, semi structured interviews are con- ducted with 13 Iranian ERP project managers, which resulted in identifying 16 new failure factors. Then, using 236 questionnaire data gathered through ERP project team members in Iranian industries, which completely failed in their ERP projects implementation, a robust EFA is conducted and 35 finally failure factors are categorized into seven main components consist of ‘‘Vendor and Consultant’’, ‘‘Human Resources’’, ‘‘Managerial’’ ‘‘Project Management’’, ‘‘Processes’’, ‘‘Organizational’’ and ‘‘Tech- nical’’. Based on these results, a framework has been proposed for ERP CFFs in Iranian industries and finally each main component are discussed separately to give a bright insight to practitioners and academic researchers in the field. One of the main contributions of the work is that it exploits a hybrid approach in identifying ERP failure factors, which resulted in extracting some new failure factors that are not articulated in the current literature. Although the proposed framework is validated for Iranian industries, but it is believed that it can be probablyconsistent for similar developing countries, which suffer from the same problems. Also, it is the first work, explor- ing ERP failure factors in the context of Iranian industries. The authors believe that the results of this research can help organizations make better decisions for implement- ing ERPs, concentrating failure factors experienced in previous projects.