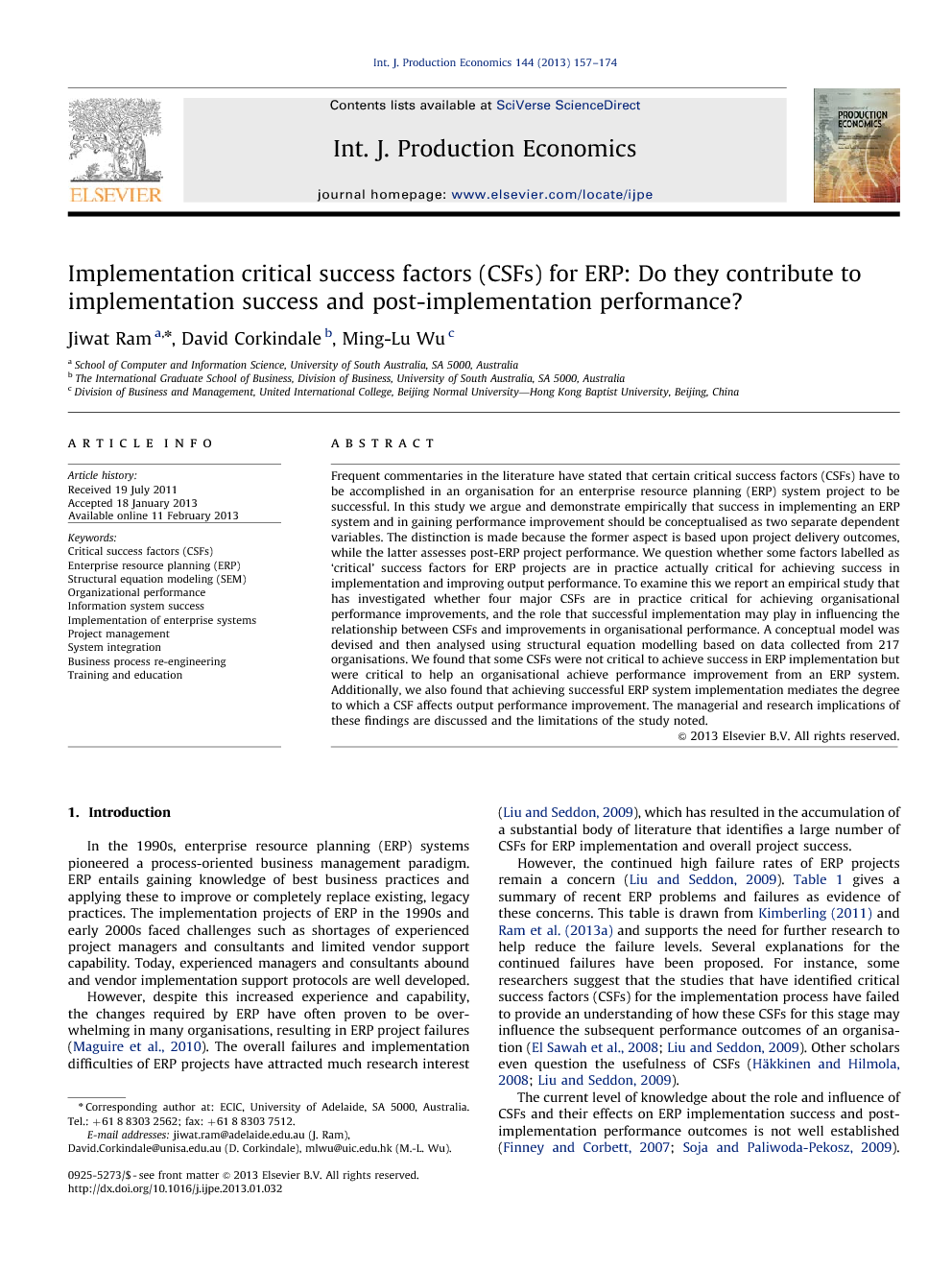 Frequent commentaries in the literature have stated that certain critical success factors (CSFs) have to be accomplished in an organisation for an enterprise resource planning (ERP) system project to be successful. In this study we argue and demonstrate empirically that success in implementing an ERP system and in gaining performance improvement should be conceptualised as two separate dependent variables. The distinction is made because the former aspect is based upon project delivery outcomes, while the latter assesses post-ERP project performance. We question whether some factors labelled as ‘critical’ success factors for ERP projects are in practice actually critical for achieving success in implementation and improving output performance. To examine this we report an empirical study that has investigated whether four major CSFs are in practice critical for achieving organisational performance improvements, and the role that successful implementation may play in influencing the relationship between CSFs and improvements in organisational performance. A conceptual model was devised and then analysed using structural equation modelling based on data collected from 217 organisations. We found that some CSFs were not critical to achieve success in ERP implementation but were critical to help an organisational achieve performance improvement from an ERP system. Additionally, we also found that achieving successful ERP system implementation mediates the degree to which a CSF affects output performance improvement. The managerial and research implications of these findings are discussed and the limitations of the study noted.

In the 1990s, enterprise resource planning (ERP) systems pioneered a process-oriented business management paradigm. ERP entails gaining knowledge of best business practices and applying these to improve or completely replace existing, legacy practices. The implementation projects of ERP in the 1990s and early 2000s faced challenges such as shortages of experienced project managers and consultants and limited vendor support capability. Today, experienced managers and consultants abound and vendor implementation support protocols are well developed. However, despite this increased experience and capability, the changes required by ERP have often proven to be overwhelming in many organisations, resulting in ERP project failures (Maguire et al., 2010). The overall failures and implementation difficulties of ERP projects have attracted much research interest (Liu and Seddon, 2009), which has resulted in the accumulation of a substantial body of literature that identifies a large number of CSFs for ERP implementation and overall project success. However, the continued high failure rates of ERP projects remain a concern (Liu and Seddon, 2009). Table 1 gives a summary of recent ERP problems and failures as evidence of these concerns. This table is drawn from Kimberling (2011) and Ram et al. (2013a) and supports the need for further research to help reduce the failure levels. Several explanations for the continued failures have been proposed. For instance, some researchers suggest that the studies that have identified critical success factors (CSFs) for the implementation process have failed to provide an understanding of how these CSFs for this stage may influence the subsequent performance outcomes of an organisation (El Sawah et al., 2008 and Liu and Seddon, 2009). Other scholars even question the usefulness of CSFsThe current level of knowledge about the role and influence of CSFs and their effects on ERP implementation success and post-implementation performance outcomes is not well established (Finney and Corbett, 2007 and Soja and Paliwoda-Pekosz, 2009). Grabski and Leech (2007) have shown that the complementarity effects of CSFs on ERP success are important, yet are not well researched. Karimi et al. (2007) have emphasised the need for a better understanding of the effects of CSFs for ERP implementation in order to help organisations plan and execute their ERP projects more successfully. This study adopted the definition of a CSF as: for any business, the limited number of areas in which results, if they are satisfactory, will ensure successful competitive performance for the organisation. They are the few key areas where ‘things must go right’ for the business to flourish (Rockart, 1979, p. 85). We argue that a proposed CSF should only be accepted as such when attending to it results in achievement of successful ERP implementation or achievement of improved organisational performance outcomes. We question whether some of the factors that have been identified in the literature as CSFs have been well enough established empirically as contributing to implementation success and/or performance outcome. We argue that the commonly-used concept of implementation success is usually judged based upon the direct outcomes of the project delivery which includes such measures as completion on time, completion within budget, completion as expected and completion to user satisfaction. The more complete effect of the project should go further than success of project delivery, and hence an overall organisational performance construct is also introduced in this study to measure the post-implementation stage performance outcomes. The organisational performance could include improvements in the operational, financial and customer services dimensions and the creation or enhancement of various long term advantages for the organisation. Therefore, our study proposed the conceptualisation of ERP project success as two separate variables: an immediate ‘implementation success’ construct and an overall ‘organisational performance’ construct, with the former occurring first and, perhaps, having a direct affect on the later. We emphasise that the implementation success and the organisational performance of an ERP system are two distinct concepts and hence should be measured as separate variables in any exercise to understand the effects of CSFs. The above discussion gives rise to the research questions addressed in this study: 1. Which of some proposed CSFs for ERP implementation are also critical for achieving organisational performance? 2. For these CSFs, is the relationship between them and organisational performance mediated by implementation success? The investigation of the above research questions is undertaken with the aim of extending knowledge on CSFs and their role in ERP implementation success and ERP output performance improvement. The findings of this study will help practitioners to focus on the salient CSFs for achieving successful outcomes for ERP system projects. To address the research questions we develop a conceptual model and then empirically examine the relationship between specifically chosen CSFs and (a) ERP system implementation success, and (b) organisational performance. The paper is divided into seven sections. Section 2 presents a review of the literature on ERP implementation, the relationship of CSFs to performance, and the rationale for the selection of the CSFs examined in this study. The research hypotheses and associated conceptual model are developed in Section 3. We describe and detail the methodology that was adopted for the empirical stages of the study in Section 4. The results of the analyses are then presented in Section 5, while Section 6 discusses the findings of the study. Finally, the study's implications, limitations and the proposals for future research are presented in Section 7.

Our study’s purpose was to investigate the degree to which some major claimed CSFs influence the implementation of ERP systems and the performance improvement from these systems. In order to do this, we argued that the influence of CSFs may be direct or – in the case of output performance improvement – indirect and mediated through implementation. We used struc- tural equation modelling on data from a large sample of compa- nies to examine these possible CSF effects. Explanations for the findings were provided, where they did not conform to the conceptual model. We have also suggested the practical manage- rial implications of these findings. We have empirically confirmed that ERP project implementa- tion and ERP output performance improvement are distinct, separate entities and are measurable as such. This finding sug- gests that managers implementing ERP systems need to clearly identify goals and priorities for these different stages of an ERP project and then devise focused strategies for achieving each of successful implementation and post-implementation OP. The empirical results confirm that project management (PM) and training and education (TED) are critical success factors for implementation success (IMP) while system integration (SI) and business process re-engineering (BPR) are not. We found that TED and SI directly and significantly influence post-implementation OP. These results indicate that some CSFs can have a dual role in achieving success for an ERP project. A CSF’s role may not be limited to ERP implementation, as is commonly understood, but may also influence performance outcomes both directly and indirectly (e.g., TED’s influence on IMP and OP). Our study provided evidence for the mediating role of IMP in facilitating the influence of some CSFs on OP. Such an under- standing has important theoretical and managerial implications. Theoretically, this understanding provides a new direction for the way the body of knowledge on CSFs can be further developed. Managerially, the mediating role of IMP demonstrates that achieving ERP implementation can have a double pay-off. First, implementation success is necessary to achieve project delivery objectives and some CSFs help in achieving these objectives. On the other hand, some of the CSFs also need implementation to have been achieved successfully in order for them to be able to effect subsequent organisational performance improvements. So managers should appreciate that some CSFs have more than one effect on the outcome of ERP projects, and management time and resources would be well spent to plan to gain this extra benefit of understanding the locus of impact of CSFs. The outcomes of our study contribute to knowledge on ERP management by providing new evidence of the direct and indirect influences that CSFs can have on IMP and OP. By using four key CSFs, this study has provided a more holistic understanding of the individual direct and indirect influence these CSFs have on IMP and OP. The results of the study have also demonstrated the combined structural influence these four CSFs exert on IMP ( R 2 ¼ 0.409) and OP ( R 2 ¼ 0.287). Thus, these results go beyond merely identifying CSFs to that of explaining the role of CSFs and the approach required to manage CSFs at different stages of the ERP deployment process