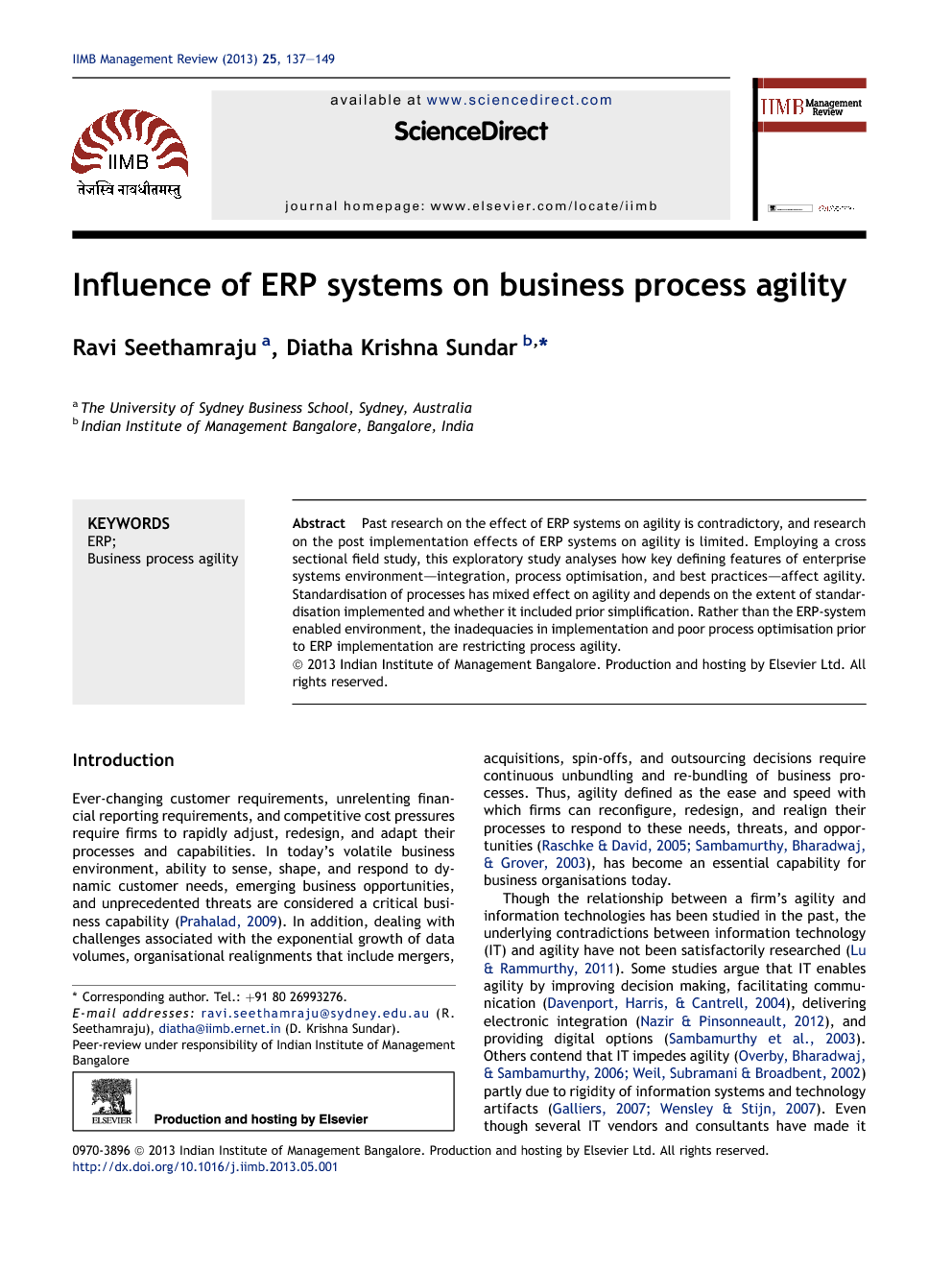 Past research on the effect of ERP systems on agility is contradictory, and research on the post implementation effects of ERP systems on agility is limited. Employing a cross sectional field study, this exploratory study analyses how key defining features of enterprise systems environment—integration, process optimisation, and best practices—affect agility. Standardisation of processes has mixed effect on agility and depends on the extent of standardisation implemented and whether it included prior simplification. Rather than the ERP-system enabled environment, the inadequacies in implementation and poor process optimisation prior to ERP implementation are restricting process agility.

Ever-changing customer requirements, unrelenting financial reporting requirements, and competitive cost pressures require firms to rapidly adjust, redesign, and adapt their processes and capabilities. In today's volatile business environment, ability to sense, shape, and respond to dynamic customer needs, emerging business opportunities, and unprecedented threats are considered a critical business capability (Prahalad, 2009). In addition, dealing with challenges associated with the exponential growth of data volumes, organisational realignments that include mergers, acquisitions, spin-offs, and outsourcing decisions require continuous unbundling and re-bundling of business processes. Thus, agility defined as the ease and speed with which firms can reconfigure, redesign, and realign their processes to respond to these needs, threats, and opportunities (Raschke and David, 2005 and Sambamurthy et al., 2003), has become an essential capability for business organisations today. Though the relationship between a firm's agility and information technologies has been studied in the past, the underlying contradictions between information technology (IT) and agility have not been satisfactorily researched (Lu & Rammurthy, 2011). Some studies argue that IT enables agility by improving decision making, facilitating communication (Davenport, Harris, & Cantrell, 2004), delivering electronic integration (Nazir & Pinsonneault, 2012), and providing digital options (Sambamurthy et al., 2003). Others contend that IT impedes agility (Overby et al., 2006 and Weil et al., 2002) partly due to rigidity of information systems and technology artifacts (Galliers, 2007 and Wensley and Stijn, 2007). Even though several IT vendors and consultants have made it their key strategy to help organisations achieve agility, an understanding of the relationship between firm agility and information technologies is limited (Lu and Rammurthy, 2011 and Nazir and Pinsonneault, 2012). While leading vendors offer a variety of technical and organisational solutions to achieve agility, and software vendors promise this agility through their enterprise systems and their suite of applications, their capacity to deliver the required capability has not been empirically studied (Tallon, 2008). With enterprise resource planning (ERP) systems firmly entrenched in most firms today and considered the backbone to managing business processes, understanding the influence of these systems on process agility is important. Despite the accumulated knowledge about ERP projects, research on post-implementation effects of ERP systems in general and on agility and innovation in particular is still limited (Nazir and Pinsonneault, 2012, Peng and Nunes, 2009 and Schlichter and Kraemmergaard, 2010). With ERP systems associated with agility (Goodhue, Chen, Boudreau, Davis, & Cochran, 2009) as well as rigidity (Galliers, 2007), the underlying contradictions are largely unknown and under researched. This research extends prior research on the post-implementation effects of ERP systems in firms and analyses the specific role played by ERP systems on process agility. Set against a resource-based view, the research analyses the link between ERP systems and business process agility from the perspective of the benefits of ERP systems. By analysing the impact of capabilities such as integration, process optimisation, and best practices enabled by the implementation of ERP systems on process agility, this study contributes to the literature by demonstrating how process agility, an intermediate outcome, is likely to affect organisational outcomes such as cost, efficiency, and profit (Tallon & Pinsonneault, 2011). This paper will first review the literature on ERP systems and agility and discuss the research model emerging from the literature review. It will then describe the research method employed in this study, and finally, present its findings and conclusions.

Enterprise resource planning systems in the past have contributed to simplification, standardisation, integration, and automation of processes, but their influence on the firm’s ability to build agility is ambiguous. Integration of processes and information across functional boundaries, according to this study, contributes to improvement in the speed of execution and enhances the ability to re-configure process components. Integration across hierarchical levels in the case organisations has resulted in improved visibility, centralisation of control and improved decision making, which indirectly contributed to process agility. Stand- ardisation of repetitive processes that were efficient before ERP implementation may also have contributed to agility. Linking with technology in an ES-enabled environment without optimising the process made those processes rigid and inflexible. In general, the best practice processes embedded in the software were found to be “true” best practices and have helped the firms achieve incremental process improvements, thereby reflecting agility. With regular updates ensuring the incorporation of latest de- velopments in practices and technologies, it is generally believed that the requisite agility is also part of the best practices. While the technical tight-coupling of the enter- prise system infrastructure has limited the firms’ ability to build agile processes, both vertical and horizontal integra- tion, and standardisation of processes and information appear to be contributing positively, this study found. It is, however, important to note that it may not be necessary for all the major standard processes supported by enterprise systems to be agile. For example, high volume transactional processes such as procure to pay, order tocash, and hire to retire are not likely to change rapidly and building agility into those standard processes is not found to be necessary. The focus of management in such transaction-centric and volume-based processes is to ach- ieve consistency, control, and thereby cost efficiencies. While demanding that their IT infrastructures be tightly integrated for control and visibility, firms are seeking to deliver agility with loosely coupled systems and technolo- gies. Though it was considered difficult to achieve both agility and control simultaneously in the past, introduction of web services technologies as well as organisational ability to optimise and manage the processes would deliver both in the long run. As rightly pointed out by one respondent, “ We get agility automatically once we deal with the process efficiency first and then automate it using the available technologies ” (respondent 1). Building agility into business processes and implementing them is not easy and is dependent not just on the IT infrastructure, but also on other factors such as organisational culture, business process management capability, and process characteris- tics specific to a particular organisation