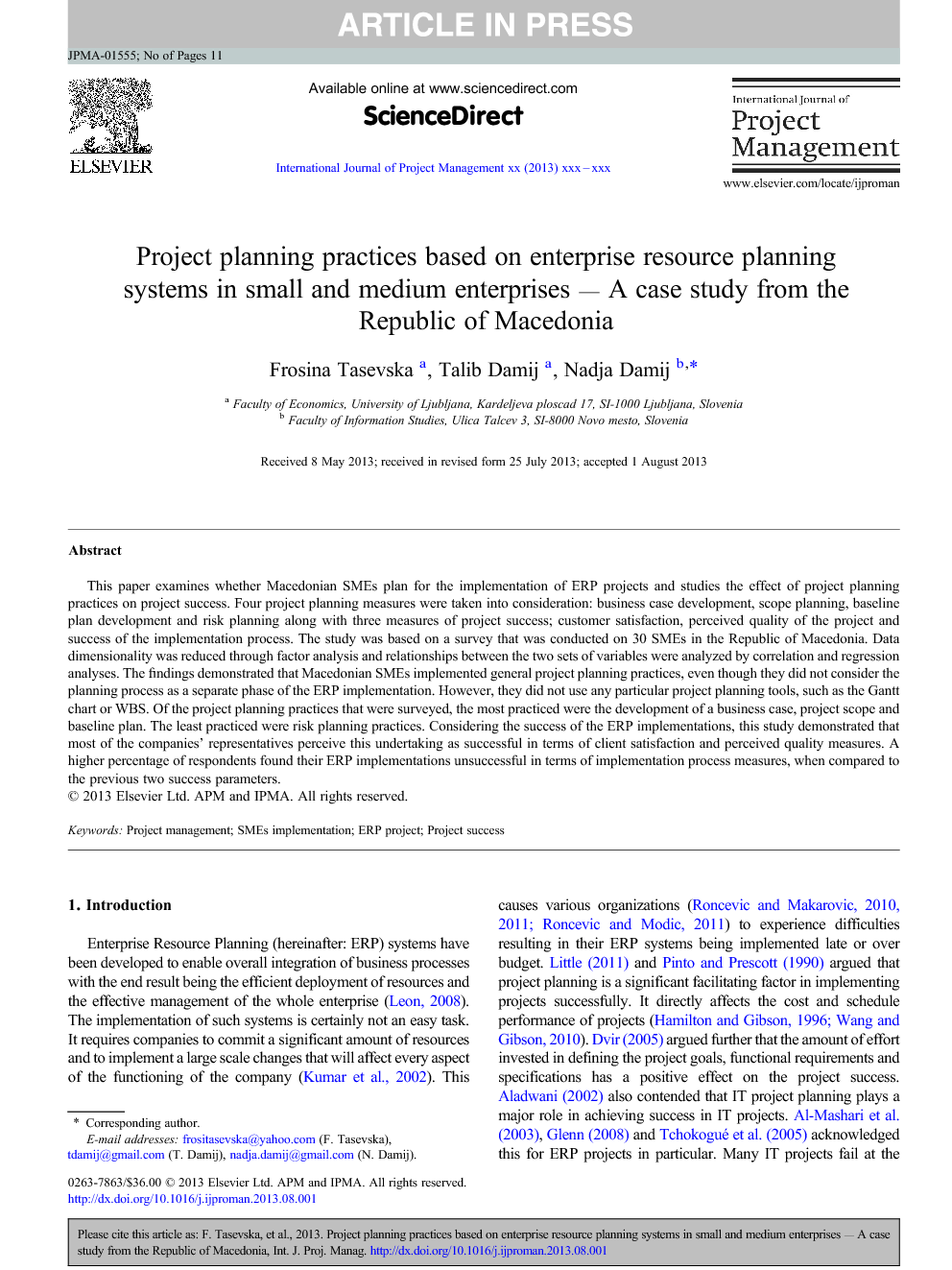 This paper examines whether Macedonian SMEs plan for the implementation of ERP projects and studies the effect of project planning practices on project success. Four project planning measures were taken into consideration: business case development, scope planning, baseline plan development and risk planning along with three measures of project success; customer satisfaction, perceived quality of the project and success of the implementation process. The study was based on a survey that was conducted on 30 SMEs in the Republic of Macedonia. Data dimensionality was reduced through factor analysis and relationships between the two sets of variables were analyzed by correlation and regression analyses. The findings demonstrated that Macedonian SMEs implemented general project planning practices, even though they did not consider the planning process as a separate phase of the ERP implementation. However, they did not use any particular project planning tools, such as the Gantt chart or WBS. Of the project planning practices that were surveyed, the most practiced were the development of a business case, project scope and baseline plan. The least practiced were risk planning practices. Considering the success of the ERP implementations, this study demonstrated that most of the companies' representatives perceive this undertaking as successful in terms of client satisfaction and perceived quality measures. A higher percentage of respondents found their ERP implementations unsuccessful in terms of implementation process measures, when compared to the previous two success parameters.

Enterprise Resource Planning (hereinafter: ERP) systems have been developed to enable overall integration of business processes with the end result being the efficient deployment of resources and the effective management of the whole enterprise (Leon, 2008). The implementation of such systems is certainly not an easy task. It requires companies to commit a significant amount of resources and to implement a large scale changes that will affect every aspect of the functioning of the company (Kumar et al., 2002). This causes various organizations (Roncevic and Makarovic, 2010, Roncevic and Makarovic, 2011 and Roncevic and Modic, 2011) to experience difficulties resulting in their ERP systems being implemented late or over budget. Little (2011) and Pinto and Prescott (1990) argued that project planning is a significant facilitating factor in implementing projects successfully. It directly affects the cost and schedule performance of projects (Hamilton and Gibson, 1996 and Wang and Gibson, 2010). Dvir (2005) argued further that the amount of effort invested in defining the project goals, functional requirements and specifications has a positive effect on the project success. Aladwani (2002) also contended that IT project planning plays a major role in achieving success in IT projects. Al-Mashari et al. (2003), Glenn (2008) and Tchokogué et al. (2005) acknowledged this for ERP projects in particular. Many IT projects fail at the beginning rather than at the end, because of insufficient planning (Phillips, 2011). Good planning is in fact halfway to success. Therefore the implementation of ERP systems should also first start with the planning of the system, before addressing the higher stages (Shanks et al., 2003). Furthermore, Glenn (2008) argued that project planning is one of the five common factors that can determine the success of an ERP implementation. Taking into consideration the high costs associated with ERP implementation and the cumbersome process of realization, the importance of the planning issues cannot be overemphasized (Chen, 2001). Mabert (2003) in their study of the US manufacturing sector, also discovered that companies emphasize the importance of planning an ERP implementation. Ngai et al. (2008) conducted a literature review on Critical Success Factors (hereinafter: CSFs) in the implementation of ERPs across 10 different regions. When considering project management, they state that a clear and defined project plan including goals, objectives, strategy, scope, schedule, and so forth was frequently cited in CSFs for ERP implementation in almost all of the regions and countries examined in their study. Furthermore, ERP projects involve significant levels of different types of risk (Iskanius, 2009). These should be taken into account and appropriate mitigation strategies and contingency plans should be developed. Therefore, based on the evidence provided in the literature, the main hypothesis is that project planning practices have a positive effect on project success. Even though ERP systems were first developed and implemented in the developed countries, companies from developing countries are also embracing these systems. They also account for CSFs when implementing their ERP projects. As the study of Mooheba et al. (2010) indicated, project management is of similar importance for companies from both developing and developed countries. Large companies were also the first to implement ERP systems, but as O'Leary (2002) assumed, ERP systems can benefit both large scale companies as well as small and medium-sized enterprises (hereinafter: SMEs). Many ERP software packages have been developed recently to suit the needs of SMEs, specifically in terms of costs and functional scope. Macedonian companies are certainly following the trend of implementing ERP systems mainly for lower scale ones, primarily because of resource constraints. Many of them implement ERP in order to improve their business processes, but some of them to comply with legislative requirements. Usually, only a few modules are implemented, mainly for finance, inventory and accounting purposes. Santa (2010), in his case study conducted in a small Macedonian company, found that ERP implementation was run intuitively based on the business experience of the owner, without employment of any particular project management practices. However, Ordanoski (2010), a Macedonian programmer and entrepreneur, realized the importance of having developed a project and assigned a team to work on an ERP implementation, and recommended these practices to other Macedonian managers. This study investigated whether Macedonian SMEs in general implement project planning practices, and whether they influenced the success of ERP implementation. The initial assumption was that successful ERP implementation depends on implementing sound project planning practices, as suggested by the literature. Therefore the primary research question was whether IT project planning has an impact on project success. The findings were expected to bring some positive value to a topic on which very little research has been done and to incite more research in the future. This contribution refers especially to the literature and industry in developing countries where scholars have significant interest in the CSFs of the ERP implementations (Amid et al., 2012). The survey was employed as a technique for primary data collection. Both the planning and the success of the project were measured via several dimensions. A combination of exploratory and confirmatory factor analysis was used to reduce the data collected through Likert-type items and to produce these dimensions. After performing this analysis, correlation and regression analyses were used in order to describe the relationships between the project planning practices and project success measures (Dvir, 2005).

The results of this study demonstrate that Macedonian SMEs implement general project planning practices, even though they do not consider the planning process as a separate phase of ERP implementation. However, they do not use any particular project planning tools, such as the Gantt chart or WBS. From the project planning practices that were surveyed, the most practiced are the ones involved in thedevelopment ofa business case,project scope and baseline plan. The least practiced are risk planning practices, a finding which is consistent with the literature. Regarding the success of ERP implementations, this study demonstrates that most of the companies' representatives perceive this undertaking as a success in terms of client satisfaction and perceived quality measures. A higher percentage of respondents find their ERP implementations unsuccessful in terms of implementation process measureswhen comparedto the previous two successdimensions. However, the study reveals that not all IT project planning practices have the same effect on project success. Development of a baseline plan appears positively related to all of the project success measures used in this study. Based on regression analysis, it appears to be a significant predictor of two of these measures, client satisfaction and perceived quality. Thus, the conclusion can be drown that the development of a baseline plan may improve the likelihood of client satisfaction and perceived quality. Business case development also appears to be positively related to all of the success measures. However, regression analysis demonstrates that it can only be considered as a significant predictor of the implementation process success measure. Thus, developing a business case may improve the likelihood of the success of the implementation process. Scope planning and risk planning practices were also considered in this study as they were indicated by the literature to have a positive effect on project success as well, but this study fails to support this claim. Both correlation and regression analysis did not indicate significant relationships between these two measures and the project success measures. Therefore, it can be concluded that if Macedonian companies want to achieve successful ERP implementations, they should put more effort into developing a business case and developing a baseline plan. Based on the results of this study, the main recommendation would be that even though every project planning practice is important for the success of the project, as indicated by the literature, more effort should be put into the development of a business case and a baseline plan. These two measures appear to have a major effect on ERP project success in the Macedonian companies that were included in the sample. This is most probably so because both encompass more tangible and measurable activities that are easier to understand whencompared with scope planning and risk planning activities. For example, the baseline plan expresses all the decisions that have been made during scope planning into clearly defined activities that have to be executed. This method might be better understood and followed by the implementation team or the person responsible for implementation, than when they are expressed in terms of goals or deliverables. This is especially valid for companies that do not possess human resources with appropriate project management skills, as in this case study. Because of the small sample size, the results obtained in this study are sample-specific and cannot be generalized. However, they bring empirical evidence (that can be validated through bigger sample size) to enhance the theories related to ERP planning and ERP project success. A bigger sample could also overcome potential over-fitting that might be present in this study. The outcomes of the study might also be of interest to consultants in suggesting areas on which to focus when working on a plan for ERP implementations in developing countries. Furthermore, as the study validated an existing instrument for measuring project success and developed a new one for measuring project planning, they both might be used in further studies with more confidence. It seems necessary that future studies investigate further the effect of risk and scope planning on the ERP project success as they were found to have no effect in this case-study