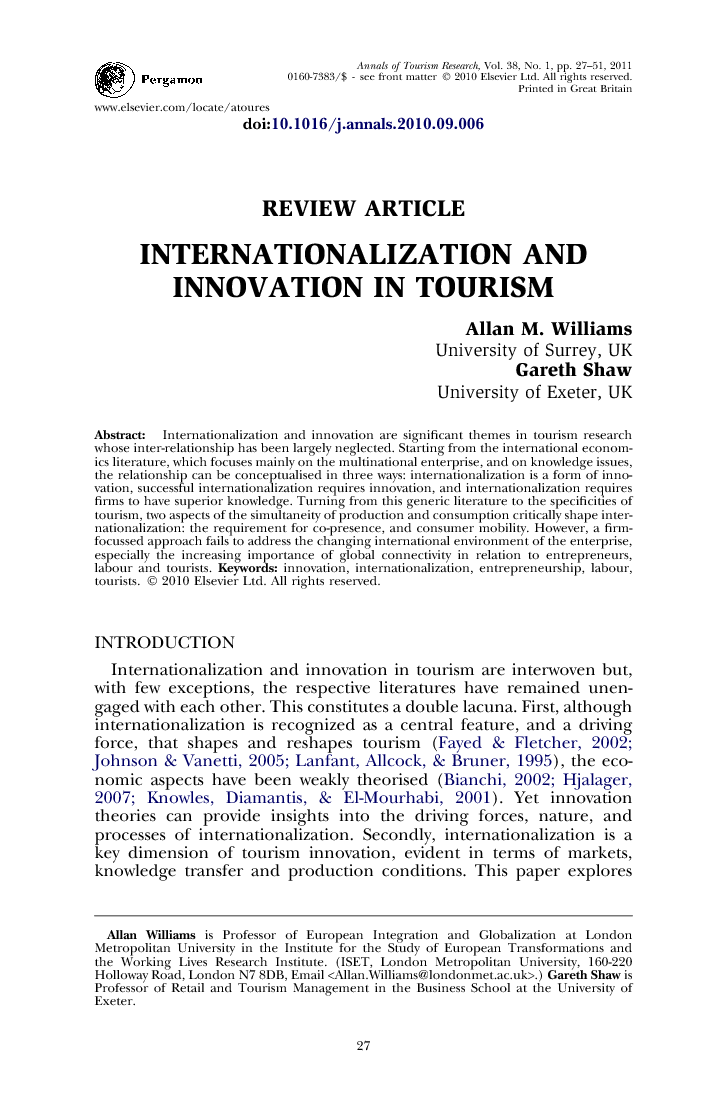 Internationalization and innovation in tourism are interwoven but, with few exceptions, the respective literatures have remained unengaged with each other. This constitutes a double lacuna. First, although internationalization is recognized as a central feature, and a driving force, that shapes and reshapes tourism (Fayed and Fletcher, 2002, Johnson and Vanetti, 2005 and Lanfant et al., 1995), the economic aspects have been weakly theorised (Bianchi, 2002, Hjalager, 2007 and Knowles et al., 2001). Yet innovation theories can provide insights into the driving forces, nature, and processes of internationalization. Secondly, internationalization is a key dimension of tourism innovation, evident in terms of markets, knowledge transfer and production conditions. This paper explores how the relationships between innovation and internationalization can be conceptualised, thereby contributing to mapping out future tourism research agendas. Theoretical work on the economic analysis of both innovation and internationalization traditionally has focussed on manufacturing (Coviello & Munro, 1997), and selectively on some service sectors such as retailing (Alexander and Dawson, 1994 and Coe and Hess, 2005). In contrast, tourism is relatively neglected (see Shaw and Williams, 2004 and Sinclair and Stabler, 1997). This is rooted in an ideological paradigm that sees manufacturing as the dynamic motor of the economy. Yet there is strong and growing evidence of the internationalization of tourism, whether in terms of production (Go & Pine, 1995) or consumption (Vellas & Becherel, 1995). This makes the relatively limited theorisation of tourism innovation particularly surprising. The starting point for this conceptualization is the most developed area of research in the field, the international economics literature on multi-national enterprises. This asserts the central importance of comparative knowledge advantages, especially under conditions of uncertainty. Originating with Hymer (1960), these theories argue that firms which internationalize necessarily have superior knowledge (and hence innovation capacity) than nationally-focussed companies. Caution is needed here. While the term multi-national has become synonymous with large-scale enterprises, it can refer to any enterprise operating across borders. Internationalisation is not—and probably never was—the exclusive preserve of large corporations (Zahra, 2005). There is also a need to consider internationalization and innovation in small and medium sized enterprises (SMEs) (Prashantham, 2008), which are especially important in tourism ( Mungall and Johnson, 2004 and Smeral, 1998). The generic literatures on internationalization and innovation need to be informed by the specificities of tourism. While there are several distinctive features of tourism innovation (Hall & Williams, 2008, chapter 1), the key issue in internationalization is the simultaneity of production and consumption. This has two main consequences. First, enterprises that provide services directly (rather than through sub-contracting) to tourists in international markets require co-presence: they must have a material local presence, whether in the form of a car rental office or airline staff at an airport. Secondly, tourism is distinctive in that a significant market segment (international tourism), by definition, is mobile beyond the immediate locality. Firms developing their global reach and brand building (Vellas & Becherel, 1999) may therefore have to undertake direct foreign investments, requiring associated innovations, if they are targeting the provision of tourism services to non-nationals—whether from their own or other countries—in a foreign destination. Although international economics provides a useful perspective, it fails to address the changing context of the internationalization of innovation, especially in tourism. The distinctiveness of tourism innovation is shaped not only by the inherent mobility of tourism consumers, but also by the more generalised internationalization of mobility, and connectivity. One of the drivers of innovation, especially in terms of accessing knowledge, is global connectivity (NESTA, 2008). In a globalizing world, there is increasing scope for tourism innovation to be shaped not only by the internationalization of capital, managers and entrepreneurs, but also of tourists and labour. Global connectivity assumes particular importance in the context of the emerging understanding of innovation as being co-produced and co-created (Etgar, 2008). The first part of the paper reviews the classic theorisation of internationalization in economics, and considers the specificities of tourism in this setting, while the second part considers tourism innovation in the context of global connectivity. The final section sets out an agenda for future research.