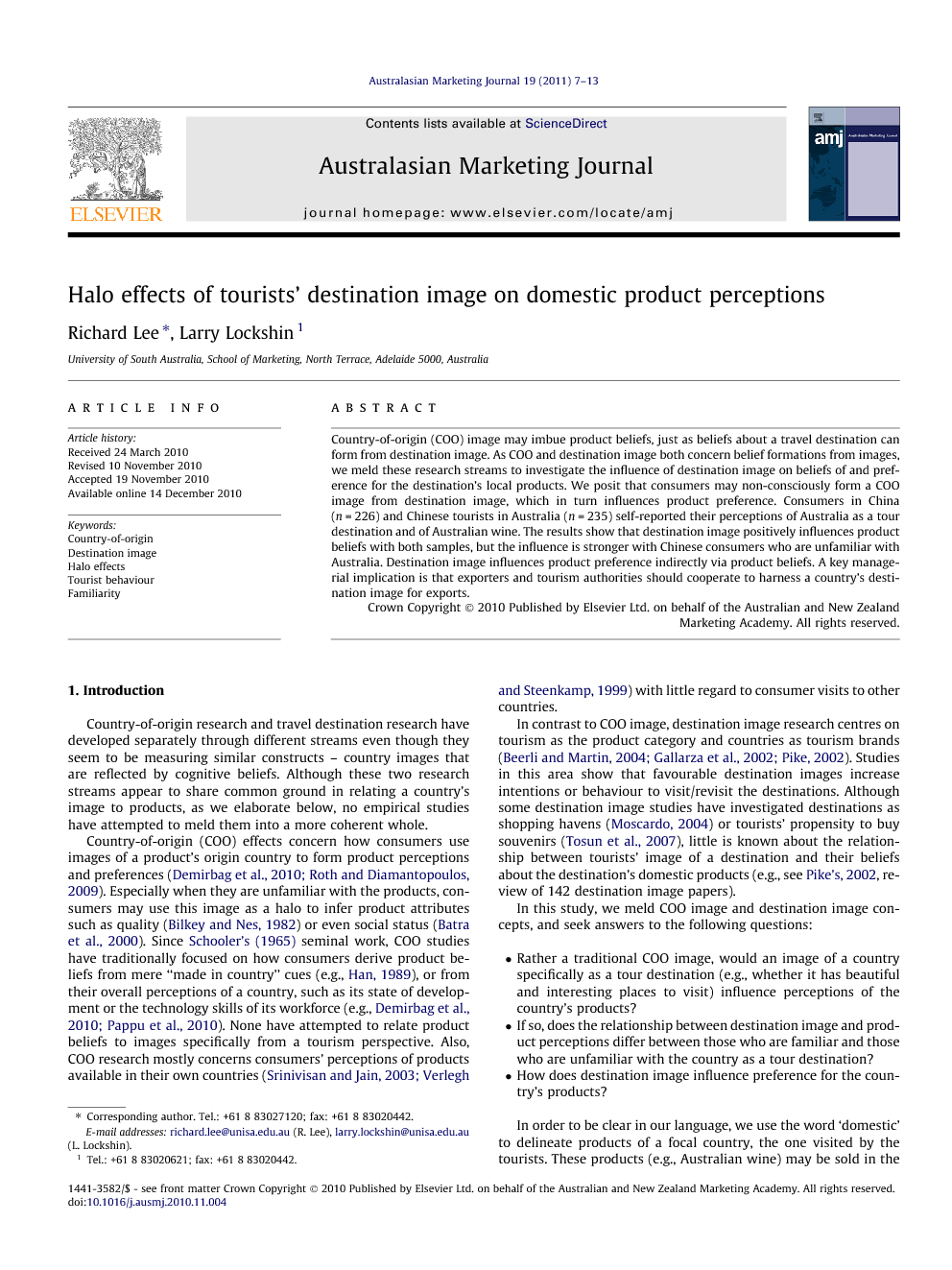 Country-of-origin research and travel destination research have developed separately through different streams even though they seem to be measuring similar constructs – country images that are reflected by cognitive beliefs. Although these two research streams appear to share common ground in relating a country’s image to products, as we elaborate below, no empirical studies have attempted to meld them into a more coherent whole. Country-of-origin (COO) effects concern how consumers use images of a product’s origin country to form product perceptions and preferences (Demirbag et al., 2010 and Roth and Diamantopoulos, 2009). Especially when they are unfamiliar with the products, consumers may use this image as a halo to infer product attributes such as quality (Bilkey and Nes, 1982) or even social status (Batra et al., 2000). Since Schooler’s (1965) seminal work, COO studies have traditionally focused on how consumers derive product beliefs from mere “made in country” cues (e.g., Han, 1989), or from their overall perceptions of a country, such as its state of development or the technology skills of its workforce (e.g., Demirbag et al., 2010 and Pappu et al., 2010). None have attempted to relate product beliefs to images specifically from a tourism perspective. Also, COO research mostly concerns consumers’ perceptions of products available in their own countries (Srinivisan and Jain, 2003 and Verlegh and Steenkamp, 1999) with little regard to consumer visits to other countries. In contrast to COO image, destination image research centres on tourism as the product category and countries as tourism brands (Beerli and Martin, 2004, Gallarza et al., 2002 and Pike, 2002). Studies in this area show that favourable destination images increase intentions or behaviour to visit/revisit the destinations. Although some destination image studies have investigated destinations as shopping havens (Moscardo, 2004) or tourists’ propensity to buy souvenirs (Tosun et al., 2007), little is known about the relationship between tourists’ image of a destination and their beliefs about the destination’s domestic products (e.g., see Pike’s, 2002, review of 142 destination image papers). In this study, we meld COO image and destination image concepts, and seek answers to the following questions: • Rather a traditional COO image, would an image of a country specifically as a tour destination (e.g., whether it has beautiful and interesting places to visit) influence perceptions of the country’s products? • If so, does the relationship between destination image and product perceptions differ between those who are familiar and those who are unfamiliar with the country as a tour destination? • How does destination image influence preference for the country’s products? In order to be clear in our language, we use the word ‘domestic’ to delineate products of a focal country, the one visited by the tourists. These products (e.g., Australian wine) may be sold in the country visited (Australia), but may also be exported to the tourists’ home country (e.g., China). Papadopoulos and Heslop (2002, p. 295) lament that acceptance of the country-image concept is still low, and that “marketing a country or place is often a little-understood panacea [used by governments out of] necessity rather than choice because their counties or cities were on the economic sick list and in dire need of exports, tourism and foreign investment”. This study provides a test of our contention that COO and travel destination research can be blended to better understand the effects of a nation’s image on tourism and consumer behaviour in a globalising world. As we elaborate later, a successful validation of our research model would also have applied implications, particularly the links between tourism and product exports.