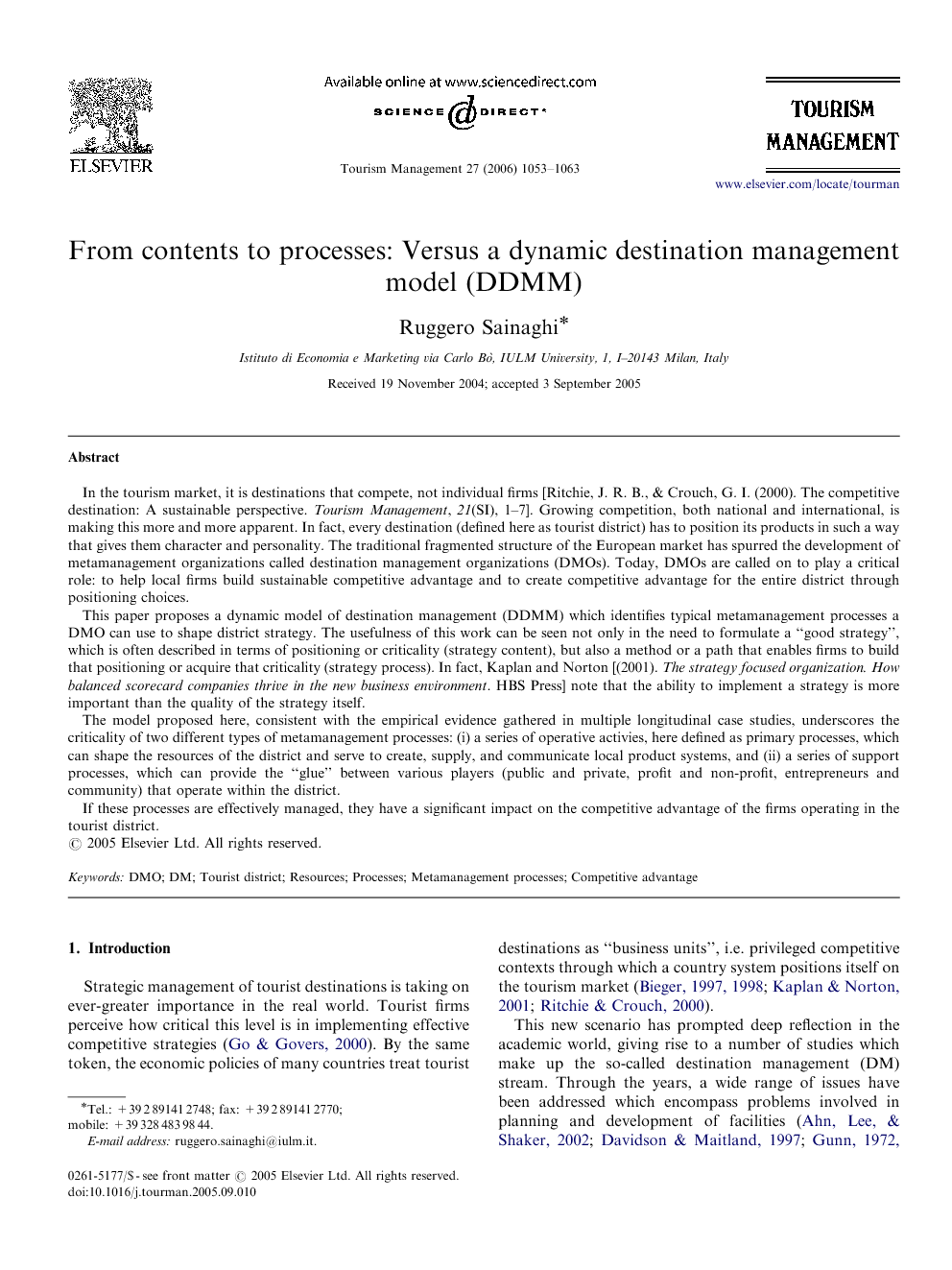 In the tourism market, it is destinations that compete, not individual firms [Ritchie, J. R. B., & Crouch, G. I. (2000). The competitive destination: A sustainable perspective. Tourism Management, 21(SI), 1–7]. Growing competition, both national and international, is making this more and more apparent. In fact, every destination (defined here as tourist district) has to position its products in such a way that gives them character and personality. The traditional fragmented structure of the European market has spurred the development of metamanagement organizations called destination management organizations (DMOs). Today, DMOs are called on to play a critical role: to help local firms build sustainable competitive advantage and to create competitive advantage for the entire district through positioning choices. This paper proposes a dynamic model of destination management (DDMM) which identifies typical metamanagement processes a DMO can use to shape district strategy. The usefulness of this work can be seen not only in the need to formulate a “good strategy”, which is often described in terms of positioning or criticality (strategy content), but also a method or a path that enables firms to build that positioning or acquire that criticality (strategy process). In fact, Kaplan and Norton [(2001). The strategy focused organization. How balanced scorecard companies thrive in the new business environment. HBS Press] note that the ability to implement a strategy is more important than the quality of the strategy itself. The model proposed here, consistent with the empirical evidence gathered in multiple longitudinal case studies, underscores the criticality of two different types of metamanagement processes: (i) a series of operative activies, here defined as primary processes, which can shape the resources of the district and serve to create, supply, and communicate local product systems, and (ii) a series of support processes, which can provide the “glue” between various players (public and private, profit and non-profit, entrepreneurs and community) that operate within the district. If these processes are effectively managed, they have a significant impact on the competitive advantage of the firms operating in the tourist district.

Strategic management of tourist destinations is taking on ever-greater importance in the real world. Tourist firms perceive how critical this level is in implementing effective competitive strategies (Go & Govers, 2000). By the same token, the economic policies of many countries treat tourist destinations as “business units”, i.e. privileged competitive contexts through which a country system positions itself on the tourism market (Bieger (1997) and Bieger (1998); Kaplan & Norton, 2001; Ritchie & Crouch, 2000). This new scenario has prompted deep reflection in the academic world, giving rise to a number of studies which make up the so-called destination management (DM) stream. Through the years, a wide range of issues have been addressed which encompass problems involved in planning and development of facilities (Ahn, Lee, & Shaker, 2002; Davidson & Maitland, 1997; Gunn (1972), Gunn (1979) and Gunn (1980); Inskeep (1991) and Inskeep (1994); Pearce, 1989), managing carrying capacity (Williams & Gill, 1998), handling destination life cycle (Butler, 1980), and managing destination marketing mix (Buhalis, 2000; Gartrell, 1988; Perdue & Pitegoff, 1990). More recently attention has been focused on the challenges of strategic management (Bieger & Weibel, 1988; Flagestad & Hope, 2001; Middleton, 1994; Weaver, 2000). Moreover, if at first the concept of destination tended to coincide with large geographical areas, focus shifted to a local level (Middleton, 1994) and various types of destinations were identified (Buhalis, 2000; Gilbert, 1990). These studies have a tendency to utilize an approach which focuses primarily on contents (which critical success factors, what strategic positioning can generate the highest performance). As a result, the problem of method (i.e. what to do to build this positioning) often remains implicit. In a tourist district where hundreds of independent players compete, often with radically different development visions, who should take on DM? How can these players come together to work toward certain goals? How can actions undertaken at a district level be brought into line with those done by individual local firms? Empirical research at the basis of this paper highlights the need to arrive at a general DM model so that to reach a tourism objective, such as reducing seasonality or developing a new product or a new segment, various tools can be used at the same time. This requires the involvement of various players, both public and private. In addition, the actions of the DM are long term, and the process of implementing a given action is often modified. This may be due to new information acquired through that action, or may be advisable to maintain internal consensus. At this point, the need arises for the development of a dynamic framework, formulated through systematic observations of specific tourist destinations (referred to here as “tourist districts”) which are already operative. The proposed model adopts the standpoint of the local destination management organizations (DMOs). In fact, in all the case studies, these organizations served the main functions of DM. The model provides a useful framework in which to collate specific studies already developed in the literature. These works focus on: (i) specific functions of DM (such as marketing), (ii) managing phases in the life cycle of a district (e.g. relaunch or start-up), or (iii) particular problems (like carrying capacity

This empiral work confirms the critical role that DMOs are called on to play in order to support the competitiveness of tourist districts. In fact, the fragmented structure of the tourism products on offer requires that a director takes charge who can deal with certain managerial processes at a “corporate” level. The role played by DMOs supports the strategic decisions taken by district firms which are key to build competitive advantage. In other words, where there are serious, widespread inconsitencies in the positioning strategies of local firms, it is unlikely that the metamanagement actions taken by the DMO will have an appreciable impact. The model proposed is a dynamic one which keys in on two main areas of intervention of DMOs: primary processes and support processes. Primary processes play a vital role, in particular regarding new product development, communication, and marketing of the district. Empirical evidence clearly shows that these processes must be governed primarily by DMOs, given the presence of positive externalities, free-riding phenomena, high initial investments, and uncertain financial returns. Primary processes, moreover, represent an important steering mechanism for reinforcing the competitive advantage of local firms, setting up the parameters for positioning the district's products. So, for example, the impressive development of one-of-a-kind sporting events accomplished by Kurverkehrsverein in St. Moritz has attracted media attention, resulting in numerous editorials and news reports. All this has enhanced the St. Moritz “Top of the World” brand, utilized in lucrative licensing activity. The success of a district is mainly linked to the ability of its actors to “make a system”, working consistently toward shared goals. Support processes are a great opportunity: they allow a district to develop constant communication between operators (internal marketing), encourage skill enhancement (training), and generate new information that serves to plan and assess actions (research). These processes, though they play an indirect role, can extend the work of the DMO, promoting critical and continuous dialogue with actors (firms and the local community) operating within the district. Summing up, then, support processes make the glue, develop the skills, and create tension. There are numerous advantages that arise from the DDMM for the management of tourist districts. Most importantly, the DDMM clearly pinpoints areas in which the DMO can intervene in terms of both resources and processes. The model also determines which activities are the responsibility of the other actors. Furthermore, the model helps clarify the complex connections that tie the DMOs actions into those undertaken of other local actors (local firms and local government). This knowledge can enable DMOs to carefully handle support processes. Moreover, the model can be used ex-post to determine the causes for success or failure of specific supervisory actions, and identify ex-ante precious operative suggestions for district management. Lastly, systems for measuring district performance can be improved by fine-tuning specific indicators for various actions taken.