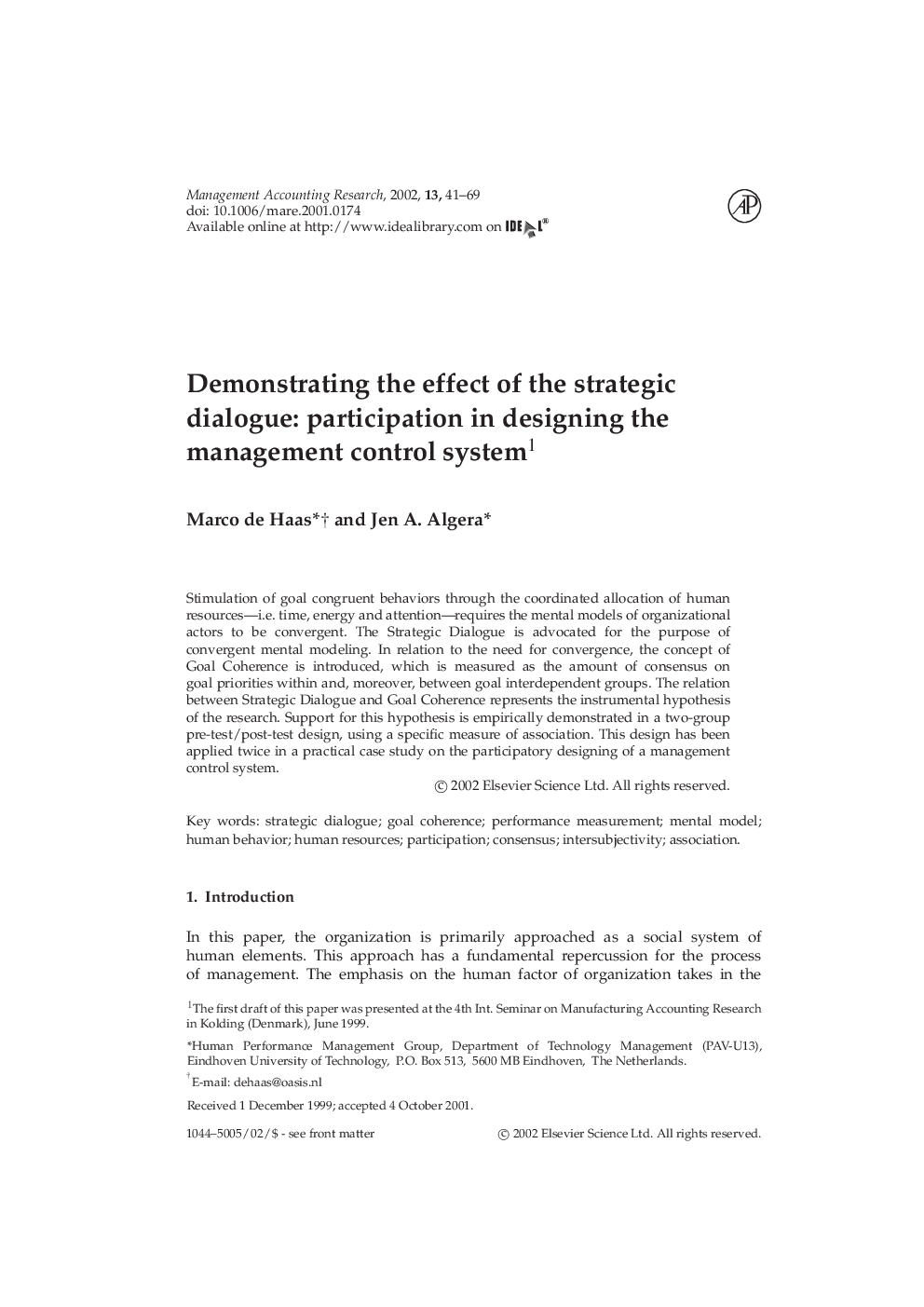 Stimulation of goal congruent behaviors through the coordinated allocation of human resources—i.e. time, energy and attention—requires the mental models of organizational actors to be convergent. The Strategic Dialogue is advocated for the purpose of convergent mental modeling. In relation to the need for convergence, the concept of Goal Coherence is introduced, which is measured as the amount of consensus on goal priorities within and, moreover, between goal interdependent groups. The relation between Strategic Dialogue and Goal Coherence represents the instrumental hypothesis of the research. Support for this hypothesis is empirically demonstrated in a two-group pre-test/post-test design, using a specific measure of association. This design has been applied twice in a practical case study on the participatory designing of a management control system.

In this paper, the organization is primarily approached as a social system of human elements. This approach has a fundamental repercussion for the process of management. The emphasis on the human factor of organization takes in thesimple recognition that ‘the only way organizational goals are going to be obtained is through the behavior of organizational actors’ ( Steers , 1977 ). Human behavior is based on a construction of reality in the human mind ( Vennix , 1996 ). There is convincing scientific evidence (e.g. Neisser , 1967 ) that the human mind actively constructs external reality rather than passively stores and recalls information, which is received from the environment through the senses. The active and deliberate construction of reality takes place through processes of selective perception and selective recollection. Stated differently, the human mind is biased in information selection and recollection of past events. The construction of the external reality in the human mind is referred to as a mental model. These models are dynamic in nature and will change over time due to newly gained insights in the functioning of reality. A mental model is an individual’s cognitive representation of a system (e.g. an organization) and the individual’s interaction with the system (i.e. behavior), with particular focus on how the individual’s interaction with the system causes outcomes of interest (i.e. goal attainment). The notion of belief in causality is of major interest: beliefs represent the basic conceptual building blocks of mental models ( Hinsz , 1995 ). In short, people build mental models of their environment and in turn base their behavior on these mental models, thereby creating situations which are subsequently interpreted as reality ( Vennix , 1996 ). Given the way human beings selectively process information, a holistic view of reality is the exception rather than the rule. A number of cognitive limitations induce people to perceive and recollect selectively and thus to focus on the parts rather than the whole: • Limited systems thinking capability: people have difficulty in identifying inter- connections and thinking in causal nets ( Dörner , 1980 ); • Limited information processing capacity or ‘bounded rationality’ ( Simon , 1948 ): people tend to (un)consciously reduce complexity in order to prevent information overload and to reduce mental effort ( Hogarth , 1987 ). Miller ( 1956 ) was one of the first to empirically demonstrate this phenomenon. He pointed out that in general people can only hold seven (plus or minus two) pieces of information in their short-term memory; • Limited span of attention: ‘...before information can be used by the deliberative mind, however, it must proceed through the bottleneck of attention—a serial, not parallel, process whose information capacity is exceedingly small’ ( Simon , 1985 ). Due to these cognitive limitations, people make mental models that are by definition incomplete. Since people tend to look for information which confirms their view of the world rather than to look for evidence which might refute it ( Hogarth , 1987 ), the existing and incomplete mental models in turn feed the processes of selective perception and recollection. In addition, and perhaps far more important, people make mental models that are idiosyncratic ( Hinsz , 1995 ). People differ due to differences in background, personality, experience, learning, etc., and will thus select differently. As a consequence, individuals interpret reality in their own unique ways. Everyday life thus presents itself to the individual as a subjective reality: there is no question of one single and objective reality perceived similarly by multiple individuals.The point we are trying to make is that there is ample opportunity for different human beings to construct and maintain different mental models of the ‘same’ reality. What are the chances that people with idiosyncratic views of the world will select the same chunks of information from their environment and subsequently construct the same mental representation of the perceived reality? Quite likely, these chances are negligible. Ickes and Gonzales ( 1994 ) use the term divergence to indicate the degree of dissimilarity between mental models. In this paper, we stress the above point from a management perspective. In organizations, managers and employees also have mental models. These models contain—if at all!—ideas and opinions regarding the relevance of local goals at the individual and group level, the way these goals mutually relate and the way these goals jointly contribute to the attainment of overall goals at the organizational level. Subsequently, the allocation of (scarce) human resources—i.e. time, energy and attention—to alternative courses of action is implicitly or explicitly decided upon during the daily hassle of organizational life. All else being equal, the larger the discrepancies between managers’ and/or employees’ mental models, the greater the lack of shared vision, the more the divergence in behavior and the higher the dispersion of organizational energy. According to Vennix ( 1996 ), these discrepancies will impede the effective operation of the organization, because it will induce a lack of co-operation. Assuming that management is about coordinating individual and group efforts to produce organized action, its purpose is thus to share and align multiple mental models in order to foster concerted action. Rather than devoting one’s time to the construction of strategic plans, the focus must instead be on the process of changing mental models ( Vennix , 1996 ). In the words of Checkland and Scholes ( 1990 ): ‘What is in short supply in organizations is an organized sharing of perceptions sufficiently intense that concerted action gets taken corporately’. Striving for convergent or shared mental models, i.e. for an intersubjective perception of reality throughout the organization, seems thus essential for organizational effectiveness.

The positive effects demonstrated in the M-Q design (Table 5 ) compared to the neutral effects demonstrated in the M-L design (Table 6 ), provide support for the instrumental hypothesis of our research. However, we must present this support withthe greatest care. Recall that we did not design an experiment according to the exact rules of Cook and Campbell ( 1979 ). The lack of management approval meeting in the M-L design was not planned for, but happened unintentionally in the course of the action research. We introduced the analogy of an experiment to be able to make any sense of our findings. We referred to the M-Q design as a treated ‘experimental’group, while we referred to the M-L design as an untreated ‘control’ group. From this ‘experimental’ perspective, our findings are promising, though very preliminary. The strong and positive effect on between-constituency Goal Coherence in the M-Q design is further illustrated in Figure 12 . This figure shows the dominant dimensions in the CATPCA analyses of the pre-test and post-test ranking data of the Management constituency and the Quality constituency. These dimensions represent a metric approximation of ordinal goal priorities, found by the perpendicular projection of the options upon the dominant dimension in the two-dimensional graphic representations. Moreover, since these dimensions are dominant, they represent the metric approximations of ordinal goal priorities that are shared most within the Management constituency and within the Quality constituency. Recall that the degree of between-constituency Goal Coherence in fact corresponds with the degree of similarity of within-constituency Goal Coherence between goal interdependent constituencies. The similarity in ordering preferences within separate constituencies is graphically illustrated in Figure 12 by the dotted connection-lines between shared goal definitions. Clearly, the preferred sequence of ordering by the Management constituency and the Quality constituency, especially with regard to the goal of decreasing unit cost (UC), decreasing quality complaints (QC) and increasing product development (PD), is more similar after than before the constructive controversy of the management approval meeting. In comparison, hardly any developments have taken place in the M-L design, as is illustrated in Figure 13 . Future research is required to demonstrate further and more convincing support for the instrumental relation between Strategic Dialogue and Goal Coherence in particular, and between participation and organizational effectiveness in general.