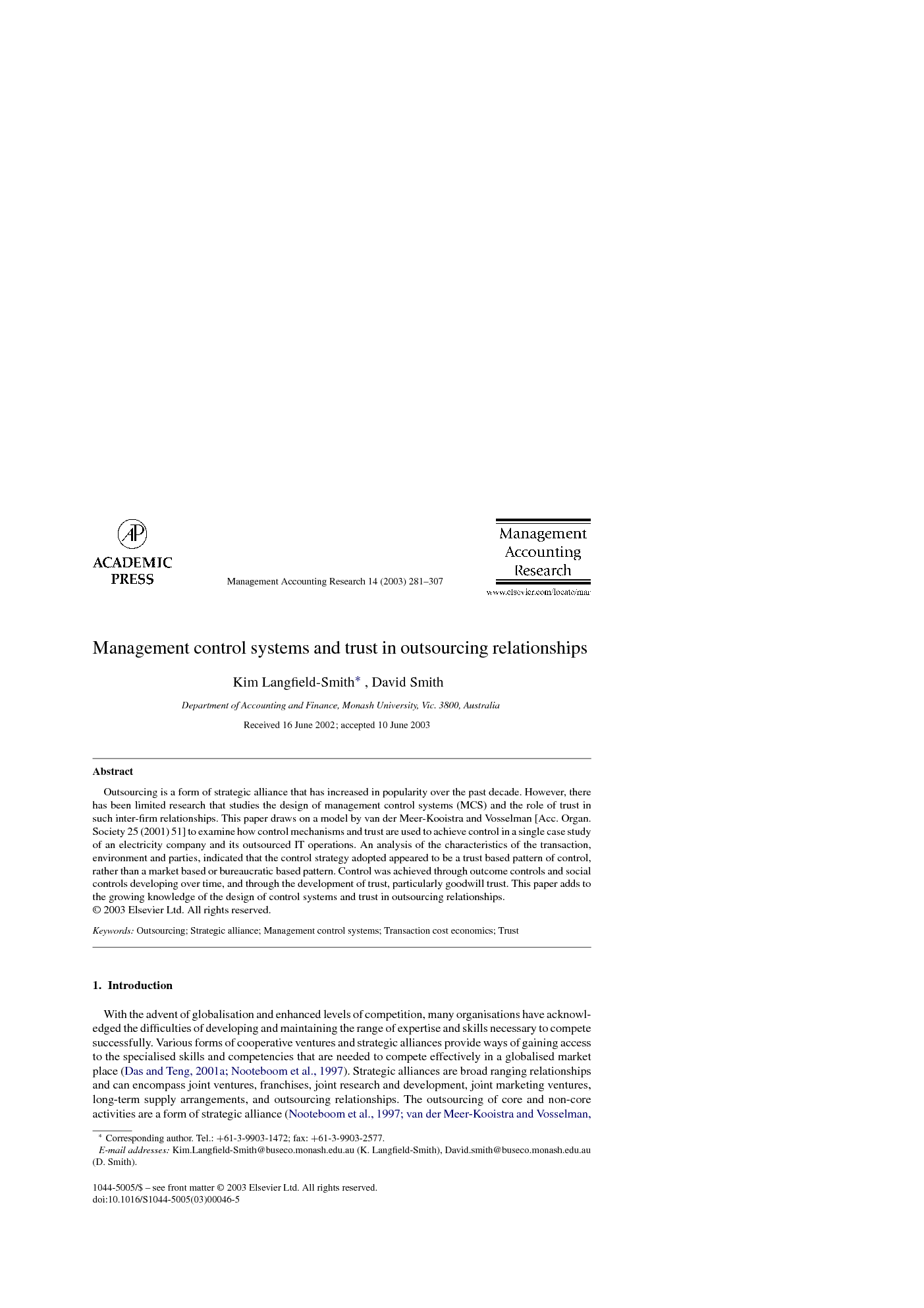 Outsourcing is a form of strategic alliance that has increased in popularity over the past decade. However, there has been limited research that studies the design of management control systems (MCS) and the role of trust in such inter-firm relationships. This paper draws on a model by van der Meer-Kooistra and Vosselman [Acc. Organ. Society 25 (2001) 51] to examine how control mechanisms and trust are used to achieve control in a single case study of an electricity company and its outsourced IT operations. An analysis of the characteristics of the transaction, environment and parties, indicated that the control strategy adopted appeared to be a trust based pattern of control, rather than a market based or bureaucratic based pattern. Control was achieved through outcome controls and social controls developing over time, and through the development of trust, particularly goodwill trust. This paper adds to the growing knowledge of the design of control systems and trust in outsourcing relationships.

With the advent of globalisation and enhanced levels of competition, many organisations have acknowledged the difficulties of developing and maintaining the range of expertise and skills necessary to compete successfully. Various forms of cooperative ventures and strategic alliances provide ways of gaining access to the specialised skills and competencies that are needed to compete effectively in a globalised market place (Das and Teng, 2001a and Nooteboom et al., 1997). Strategic alliances are broad ranging relationships and can encompass joint ventures, franchises, joint research and development, joint marketing ventures, long-term supply arrangements, and outsourcing relationships. The outsourcing of core and non-core activities are a form of strategic alliance (Nooteboom et al., 1997, van der Meer-Kooistra and Vosselman, 2000 and Das and Teng, 2001b), particularly when the outsourced activity is of key strategic importance to the organisation. Over the past decade, there has been increasing interest in the opportunities provided by strategic alliances, and outsourcing in particular (Ring and Van de Ven, 1992, Nooteboom et al., 1997 and Das and Teng, 2001b). However, there is also a growing body of evidence of a high failure rate in such arrangements. One cause of this is the high level of risk associated with alliances, compared to ‘in-house’ activities (Das and Teng, 2001a). Aspects that cause high risk include the difficulties inherent in gaining cooperation with partners who have different objectives, and the potential for opportunistic exploitation of the dependence relationship that exists between partners. Appropriate governance structures, including management control systems (MCS) and the development of trust, may work to reduce risk and decrease failure (Das and Teng, 2001a and Spekle, 2001). However, there has been only limited attention to the form of management control systems that are suited to strategic alliances, and we have only limited knowledge of the role that trust plays in such relationships. There have been calls to extend the domain of MCS to cover inter-firm relationships (Otley, 1994, Hopwood, 1996 and Spekle, 2001), and research that considers explicitly the design of MCS and trust in such situations has begun to appear (see, for example, Seal and Vincent-Jones, 1997 and Seal et al., 1999; Das and Teng, 2001a and Das and Teng, 2001b). In particular, some research focuses on MCS design and outsourcing relationships (van der Meer-Kooistra and Vosselman, 2000, Mouritsen et al., 2001 and Chua and Mahama, 2002). The purpose of this paper is to build on this prior research, to add to our knowledge of the design of MCS in outsourcing relationships. Outsourcing is the contracting of any service or activity to a third party (Drtina, 1994 and McHugh et al., 1995). Since the early 1990s, there has been considerable growth in outsourcing, in both the public and private sectors, with outsourcing being increasingly applied, not only to manufacturing activities, but also to traditional in-house administrative and management functions. These include data processing and IT operations, human resource management services, accounting functions, internal audit and marketing (Chalos, 1995). The practice of outsourcing is an international phenomenon. In the USA, Digital has outsourced its entire labour force and much of its production management to a labour hire firm. The global clothing manufacturer Benetton is little more than a shell, having outsourced its product design, manufacturing, and merchandising to contractors. In Australia, the Commonwealth Bank has outsourced its information technology, printing, record centres, supply functions and mail operations (Long, 1998 and Syvret, 1998). Much has been written about the criteria that should guide decisions to outsource, and both successes and failures in outsourcing are reported in the media. The financial press, in particular, tends to focus on the size of the contract, and the identity of the successful bidder. Outsourcing success or failure is often judged by whether the outsourcer achieves cost savings, or experiences cost over-runs. Few reports, however, consider how the inter-firm MCS can be designed to suit the particular characteristics of the outsourcing relationship. There are several, well-established models or frameworks for studying the design of MCS (see, for example, Ouchi, 1979, Flamholtz, 1983, Merchant, 1985 and Simons, 1995). However, these frameworks typically focus on control systems within an organization. Only a few comprehensive models consider the design of MCS in outsourcing relationships. For example, Speklé (2001) developed a model of control archetypes, based on transaction cost economics (TCE), and Das and Teng (2001a) modelled the relationships between MCS, trust and risk in various types of inter-firm relationships. van der Meer-Kooistra and Vosselman (2000) developed a comprehensive model of management control, which was based on principles of TCE, but which integrated the role of trust. These models will be drawn on in this paper. The paper is organised as follows. Section 2 provides a review of the literature on the design of MCS and the role of trust in outsourcing relationships. In particular, the models of van der Meer-Kooistra and Vosselman (2000), and to a lesser extent Speklé (2001), are drawn on to develop expectations of the form of controls and trust that are suited in particular transactional situations. Section 3 contains a case study of an electricity company that outsourced its information technology activities to a single specialist outsourcer. The fourth section analyses the case study to determine the form of control pattern in place, the nature of the control mechanisms and the role of trust in establishing close cooperative relationships. The final section concludes with a discussion of directions for further research.

The outsourcing of IT&T was seen by managers at Central as an effective response to the problems that existed within its IT&T function, and these were essentially problems related to cost control and control of IT planning and operations. It also provided a means for gaining access to world-class IT&T expertise, which was essential for competing in the new contestable electricity markets. These problems were essentially solved through the outsourcing of IT&T to Global. However, the relationship was considered to be very difficult in the first eighteen months. The initial contract provided only a broad framework, which developed over time to incorporate more specific provisions of specific responsibilities and performance targets, through processes of negotiation and communication with the outsourcer. While some managers saw the incomplete contract as a source of conflict that could have been avoided, this was not a universal view. A strategic alliance with a cable supplier was undertaken two years after commencement of the IT&T contract. This agreement was undertaken without a full written contract—simply a ‘heads of agreement’—as the managers negotiating the agreement had seen the problems that arose with the IT&T contract. There was also a belief among some managers that a contract could be a source of mistrust between parties. This new relationship was to be characterised by an open book approach to the sharing of information. Performance was to be tied to risk-return, and a steering committee consisting of managers from both firms was to develop performance indicators to support areas such as growth, delivery time and cost. A manager described how the new relationships would proceed, compared to the IT&T project.It’s virtually the same selection process, but we’re going to implement it in a different way. We’re not going to tie it to a legal contract; we will try and build it on trust from day one. Now we could fall flat on our face but some experiences that I’ve had suggests the legal agreement does introduce a sense of mistrust from day one, because all the i’s have got to be dotted and the t’s have got to be crossed. I have to admit our lawyers are not exactly ecstatic about this direction but it have accepted it with a few clauses that we’ve had to put in to keep them happy. But what we’re saying is that we’re not going to be tied to a legal agreement. This thing we want to have is an arrangement and partnership built on trust.