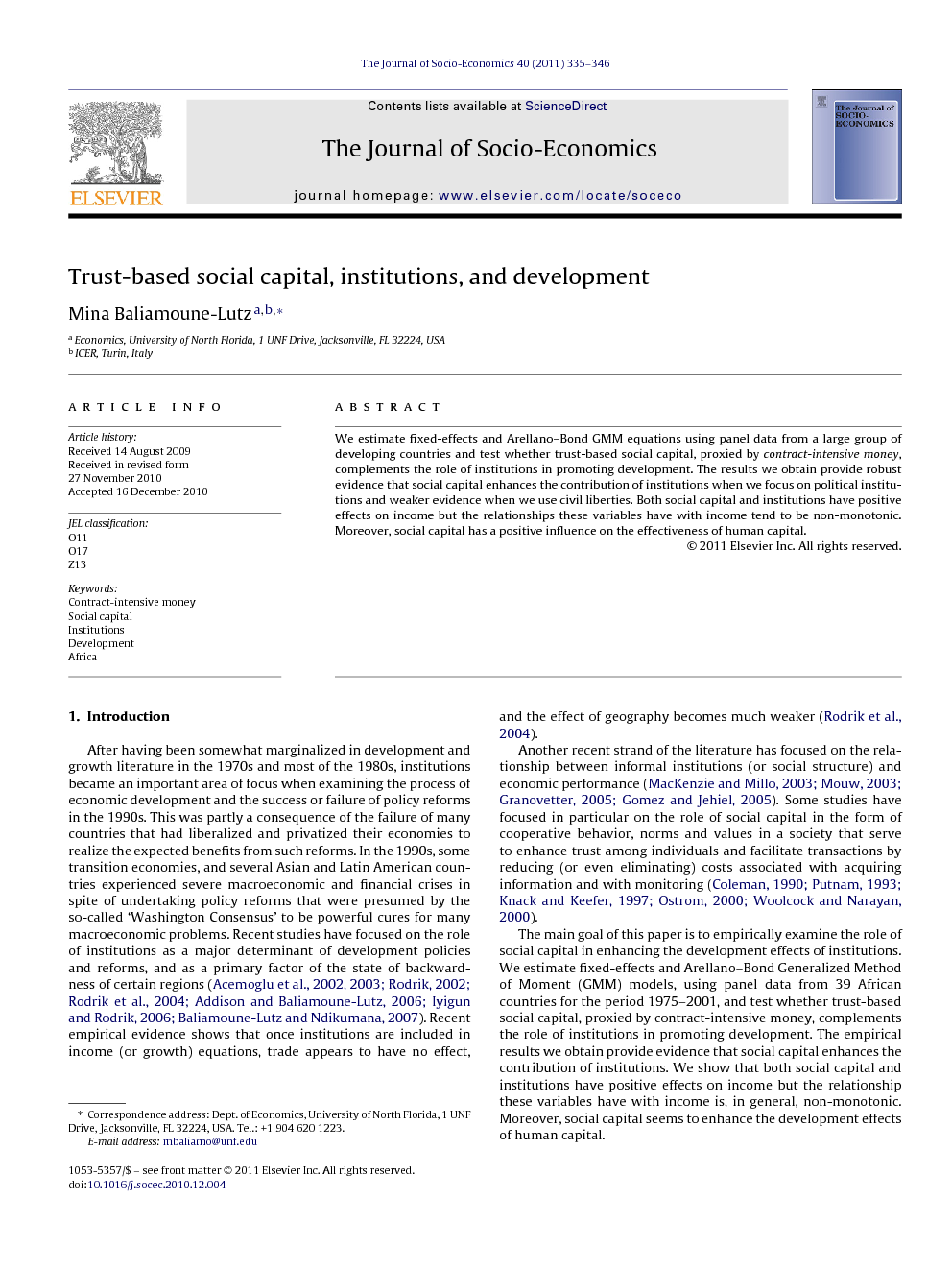 We estimate fixed-effects and Arellano–Bond GMM equations using panel data from a large group of developing countries and test whether trust-based social capital, proxied by contract-intensive money, complements the role of institutions in promoting development. The results we obtain provide robust evidence that social capital enhances the contribution of institutions when we focus on political institutions and weaker evidence when we use civil liberties. Both social capital and institutions have positive effects on income but the relationships these variables have with income tend to be non-monotonic. Moreover, social capital has a positive influence on the effectiveness of human capital.

After having been somewhat marginalized in development and growth literature in the 1970s and most of the 1980s, institutions became an important area of focus when examining the process of economic development and the success or failure of policy reforms in the 1990s. This was partly a consequence of the failure of many countries that had liberalized and privatized their economies to realize the expected benefits from such reforms. In the 1990s, some transition economies, and several Asian and Latin American countries experienced severe macroeconomic and financial crises in spite of undertaking policy reforms that were presumed by the so-called ‘Washington Consensus’ to be powerful cures for many macroeconomic problems. Recent studies have focused on the role of institutions as a major determinant of development policies and reforms, and as a primary factor of the state of backwardness of certain regions (Acemoglu et al., 2002, Acemoglu et al., 2003, Rodrik, 2002, Rodrik et al., 2004, Addison and Baliamoune-Lutz, 2006, Iyigun and Rodrik, 2006 and Baliamoune-Lutz and Ndikumana, 2007). Recent empirical evidence shows that once institutions are included in income (or growth) equations, trade appears to have no effect, and the effect of geography becomes much weaker (Rodrik et al., 2004). Another recent strand of the literature has focused on the relationship between informal institutions (or social structure) and economic performance (MacKenzie and Millo, 2003, Mouw, 2003, Granovetter, 2005 and Gomez and Jehiel, 2005). Some studies have focused in particular on the role of social capital in the form of cooperative behavior, norms and values in a society that serve to enhance trust among individuals and facilitate transactions by reducing (or even eliminating) costs associated with acquiring information and with monitoring (Coleman, 1990, Putnam, 1993, Knack and Keefer, 1997, Ostrom, 2000 and Woolcock and Narayan, 2000). The main goal of this paper is to empirically examine the role of social capital in enhancing the development effects of institutions. We estimate fixed-effects and Arellano–Bond Generalized Method of Moment (GMM) models, using panel data from 39 African countries for the period 1975–2001, and test whether trust-based social capital, proxied by contract-intensive money, complements the role of institutions in promoting development. The empirical results we obtain provide evidence that social capital enhances the contribution of institutions. We show that both social capital and institutions have positive effects on income but the relationship these variables have with income is, in general, non-monotonic. Moreover, social capital seems to enhance the development effects of human capital. The remainder of the paper is organized as follows. In the next section we discuss institutions and social capital and briefly review recent research on social capital in Africa. Section 3 presents the variables and the methodology we employ in the empirical analysis. Section 4 reports the estimation results and comments on the findings. Concluding remarks are provided in Section 5.

The primary goal of this paper is to explore the development effects of institutions and trust-based social capital, using contract-intensive money as indicator of generalized trust. In particular, we examine the joint effect of social capital and institutions on income per capita and test whether social capital enhances the effectiveness of institutions. Results from fixed-effects and Arellano–Bond GMM estimates using data from 39 African countries, indicate that, in general, both social capital and institutions have robust positive effects on income. The joint effect of social capital and institutions is robustly positive and statistically significant. Once we take into account the interaction between human capital and social capital, we find that the positive effects of social capital on income operate primarily through the impact of social capital on human capital and political institutions. This result suggests that social capital and political institutions in Africa complement each other. This is consistent with the findings in Knack and Keefer (1997), Baliamoune-Lutz and Lutz (2004) and Baliamoune-Lutz (2009a). This conclusion is not necessarily inconsistent with the findings in micro-based studies such as Minten and Fafchamps (2002) who report that, among agricultural traders in Madagascar, social capital may substitute for weak institutions. However, it does underscore the differences between the conclusions from macro-level studies based on generalized trust, which is more relevant for anonymous trade, and those from micro-level studies based on thick or network-based trust (strong ties), which is more relevant for personalized trade. Moreover, it is possible that social capital functions as a substitute for institutions when institutions are weak, but becomes a complement to institutions as institutional quality improves. However, we fail to find unambiguous evidence in support of this proposition in the present study. We conclude by pointing out that more recently some scholars began to question the relevance of property rights for developing countries where entrepreneurship is weak or discouraged. Colombatto (2004) in particular, provides a very interesting discussion of these issues. According to Colombatto, the origins of success in the fight among competing civilizations are identified by two major notions; the principles of entrepreneurship and of individual responsibility, with geography and ideology having significant impact on these two principles. Thus, the author argues Clearly specified and enforced property rights—private property rights in particular—are of course also necessary. But without entrepreneurship and self-responsibility property rights per se do not generate growth. An ideological or cultural environment hostile to individual responsibility means that individuals are reluctant both to develop new knowledge and to take advantage of their talents, irrespective of the potential for high monetary rewards. Furthermore, such an environment tends to discourage outsiders, who may indeed be willing to take responsibilities, but are afraid that free riders or rent-seekers would be morally justified in interfering, if not explicitly encouraged to do so. Stagnation and poverty are the obvious results. Colombatto (2004, p. 257) The role of social capital in this context may be very important and the results derived in this paper seem to be in support of these arguments. Social structure and networks can play a key role in innovation (Rogers, 2003, MacKenzie and Millo, 2003 and Granovetter, 2005). Social capital in the form of generalized trust, network-generated trust, and cooperative norms may serve to reduce the uncertainties faced by entrepreneurs and thus may promote entrepreneurial activities and spur growth and development.