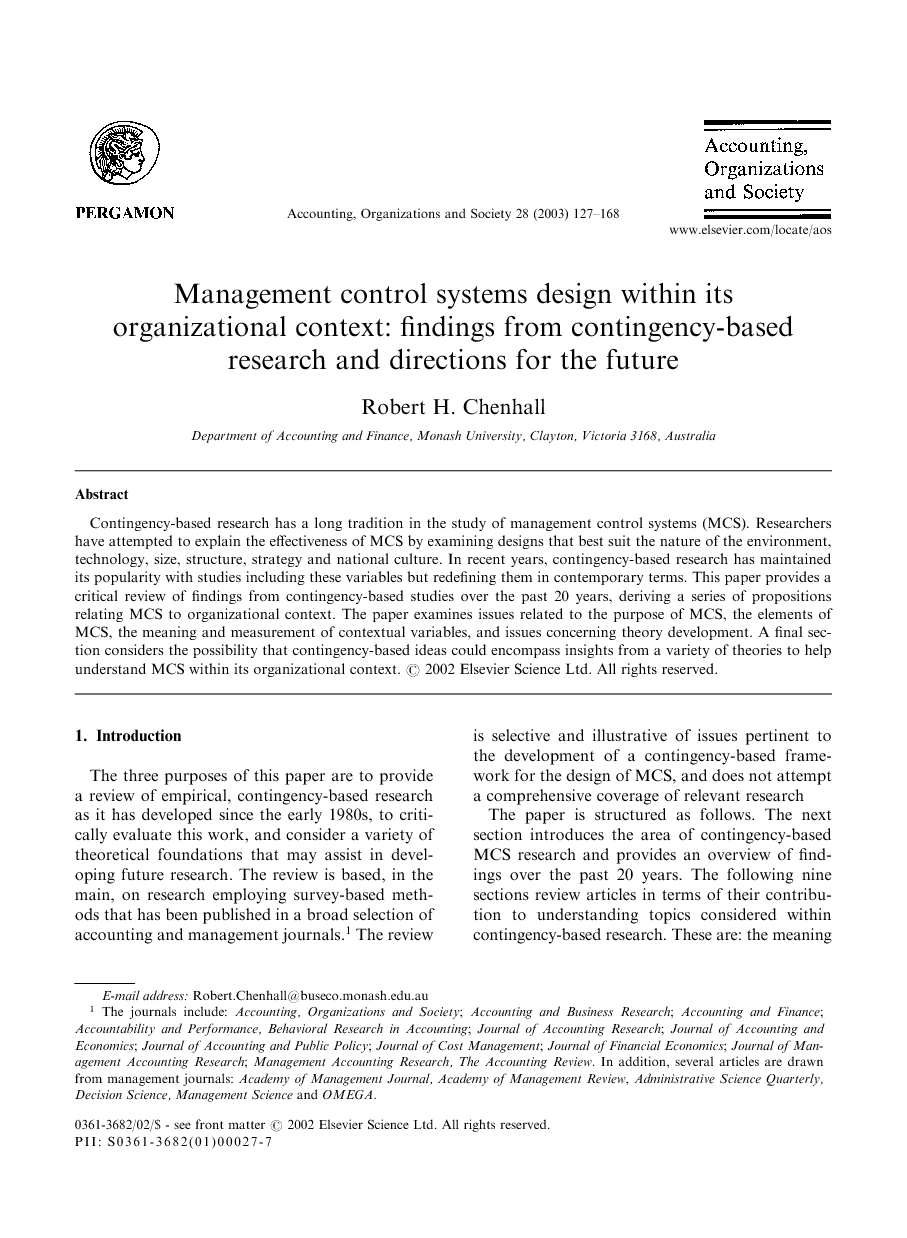 China's transition from a command economy to a market economy calls for a transformation from a centralized to a decentralized model in research and development (R&D) management control system. Virtually all scientific research was funded and monitored by the state under the centralized economy, thus creating an incentive structure for individuals and institutes to get state research grants to carry out scientific research without being able to commercially exploit its final results. This study investigates a biotechnology research institute's commercialization effort in response to economic reform. The findings show that market demand is not sufficient in bridging the gap between technological potential and commercial exploitation. Management control system based on clearly defined property rights is of critical importance to successful R&D commercialization, and market-based financing is key to an effective control system.

Research and development (R&D) is a deliberate economic investment activity that drives growth, invention, and technological advances (Hall, 1993). Previous research on R&D management, mostly based on developed economies, has generally presumed the same institutional environment, attitude to work, and choices of motivation incentives by profit-maximizing firms, therefore, any R&D decisions actually made would be efficient (Goel, 1999). Such an assumption of rationality and efficiency is not true of R&D management in a transition economy as China, where fundamental changes are taking place in property rights, ownership structure, and business organization. State-ownership and regulation have created a nonmarket R&D system with great innovative potential under central planning, but it has not been able to interface easily with the business sector. As a result, R&D institutes were unable to find interested investors or producers and might miss the commercial potential of their innovations. R&D management requires an appropriate form of business organization to nurture innovation while controlling for risks. The form of business organization is a major factor (X-factor) accounting for Pareto-efficiency in firms' productivity. When the X-factor affects the production of conventional goods only, the firm is statically X-inefficient; but when it is of consequence for the rate of innovation process, the firm is dynamically X-inefficient (Leibenstein, 1966). A firm's capability for R&D commercialization is an important measure of its dynamic X-efficiency. International evidence has shown the positive impact of privatization on reducing static X-inefficiency of formerly state-owned enterprises (SOEs) (for a review, see Megginson & Netter, 2000). However, little is known of the effect of marketization on the dynamic X-inefficiency of R&D institutes in a transition economy. This paper examines the impact of institutional changes on the operating performance of Shanghai Biotechnology Engineering Center (SBEC), a unit of the Chinese Academy of Science (CAS). SBEC was chosen as the case object for several reasons. First, as a litmus test of a CAS unit, the findings are potentially generalizable to the CAS system, which controls the majority of (civilian) R&D resources in China. Second, biotechnology R&D involves a much higher degree of technological and market risks than R&D in other disciplines, therefore, the investigation of a biotechnology institute would bring the issues under discussion into sharper focus. Third, R&D management is a sophisticated process involving various gestation and application lags. SBEC, which was specifically established to commercialize biotechnology R&D results, allows for a more objective evaluation of its operating results in financial terms. The data were derived from three sources: site visits, review of internal documents, and meetings with management, which covers the period of 1991–1997. The research method differs from other case studies in that no structured interview or formal questionnaire was used to avoid potential miscommunication caused by the complexity of the topic, highly fluid environment, and discrepancy between interviewer's and interviewees' assumptions and conceptions about R&D management. Instead, an interactive approach was adopted to study the management practice over a 1-year period (1998–1999). In addition, the author has given a series of presentations to introduce R&D management as is practiced in developed economies to the management to serve as background for discussion. The author has also shared the findings with the management to seek their response. As a result of this reciprocal information-sharing process, the management was able to identify several structural problems in the control system and proposed new operating policies to address them (see footnote 6). Chinese R&D institutes have developed a bureaucratic management system under the centralized economy. Their operating procedure was mainly established to meet policy and/or reporting requirements, and lacks a market-driven culture. SBEC has undergone gradual changes in terms of strategic objective, organization structure, project selection, and financing means in response to the changing environment. However, the limited success of its commercialization efforts show that market demand alone is not sufficient in bridging the gap between technological potential and commercial exploitation. Management control system based on clearly defined property rights is of critical importance to R&D management in a transition economy, and market-based financing is key to an effective control system. The hardness of budget constraint differentiates between the centralized and decentralized models of R&D management. The rest of the paper is organized as follows. Section 2 reviews the literature and provides the background on SBEC. Section 3 examines its management control system. Section 4 discusses the role of budget constraint, and Section 5 offers concluding comments.

The Chinese economic reform aims to revitalize state-enterprises through decentralization, improvement of internal managerial and incentive systems, and introduction of competition, with a view to transforming state-enterprises from cost centers to economic units responsible for a profit target. However, at the same time, the government has made clear its intention to retain a controlling stake in the country's largest SOEs. The same principle has been applied to the reform of R&D management system. China has the largest R&D establishment in the developing world, representing a large pool of human and material resources to be explored. While the government encourages applied R&D to drive economic growth through cooperation between researchers, industrial firms, and entrepreneurs, the uncertainty about various ownership rights issues undermines commercialization efforts. This study investigates the formation, strategy, organization, and performance of SBEC. The findings contribute to our understanding of the significance of an effective control system in R&D management, for time, cost, and risk incurred in developing an innovation is inversely related to the progress building institutional arrangements and resource endowment for the new technology. Two lessons can be drawn from the case study, which are relevant to R&D management control system in transition economy. First, management control system serves as a link between the changes in institutional environment and the implementation of organizational strategy. Clearly defined property rights provide the basis for an effective R&D control system. Management control system based on vaguely defined property is formula for costly conflicts, operating inefficiencies, and the squandering of resources. Despite the high expectation, advanced facilities, and superior location, SBEC was unable to cultivate a critical mass of technological entrepreneurship for commercialization success because of the lack of an effective control system. Second, external financing is the key of an effective R&D control system. Internal (state) financing causes soft budget constraint, which is accountable for the poor economic performance of R&D institutions under the centralized economy. In contrast, external financing provides a market-based monitoring mechanism to deter moral hazard and adverse selection problems associated with R&D investment decisions and project evaluation. The hardness of budget constraint differentiates between the centralized and decentralized model of R&D management control system. SBEC has not completed its transformation from the centralized, to the decentralized, model of R&D management, so long as internal financing exceeds external financing.