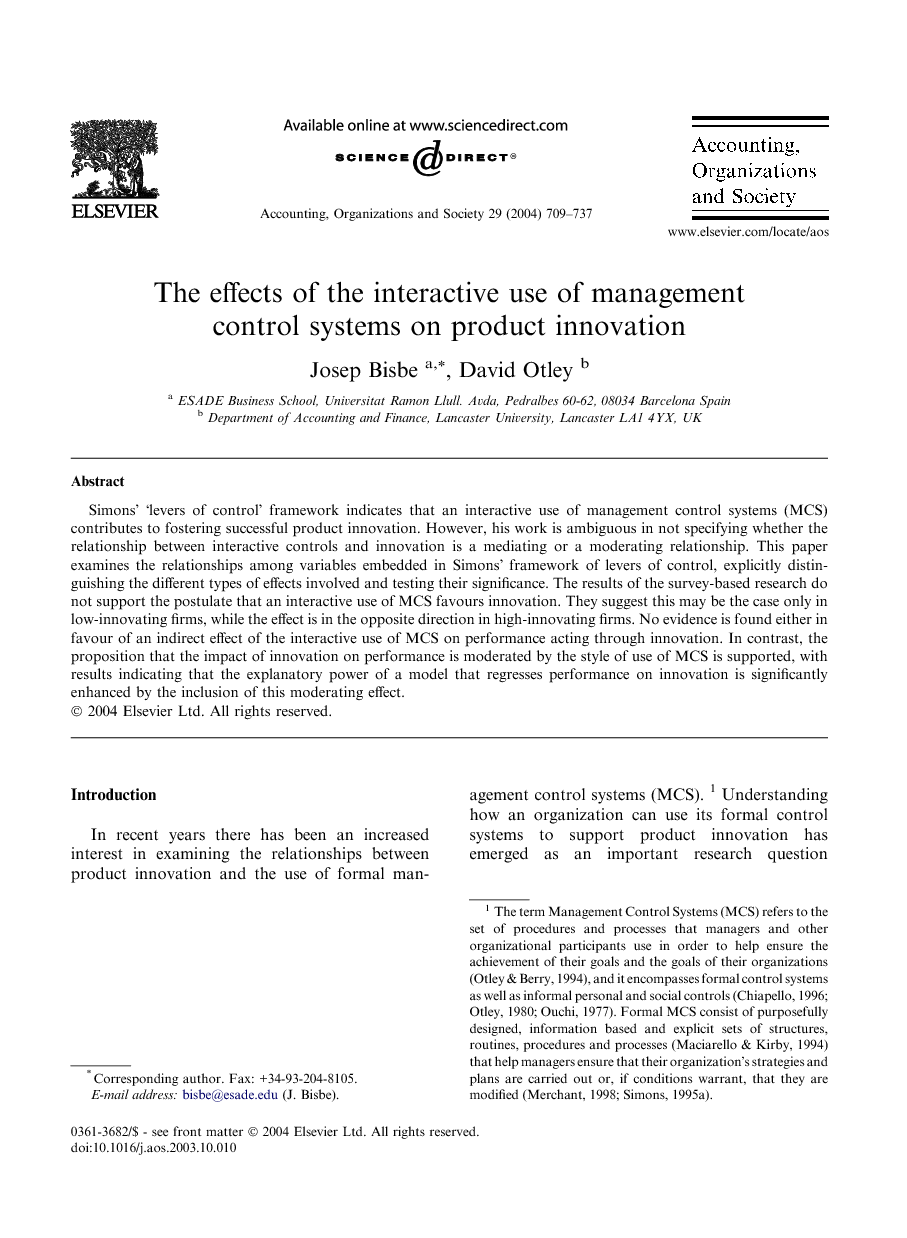 Simons' `levers of control' framework indicates that an interactive use of management control systems (MCS) contributes to fostering successful product innovation. However, his work is ambiguous in not specifying whether the relationship between interactive controls and innovation is a mediating or a moderating relationship. This paper examines the relationships among variables embedded in Simons' framework of levers of control, explicitly distinguishing the different types of effects involved and testing their significance. The results of the survey-based research do not support the postulate that an interactive use of MCS favours innovation. They suggest this may be the case only in low-innovating firms, while the effect is in the opposite direction in high-innovating firms. No evidence is found either in favour of an indirect effect of the interactive use of MCS on performance acting through innovation. In contrast, the proposition that the impact of innovation on performance is moderated by the style of use of MCS is supported, with results indicating that the explanatory power of a model that regresses performance on innovation is significantly enhanced by the inclusion of this moderating effect.

In recent years there has been an increased interest in examining the relationships between product innovation and the use of formal management control systems (MCS).1 Understanding how an organization can use its formal control systems to support product innovation has emerged as an important research question (Shields, 1997). A significant body of literature has explored the relationships between formal MCS and product innovation within subunits, taking R&D departments, product development teams and product development projects as the level of analysis (Abernethy & Brownell, 1997; Brown & Eisenhardt, 1995; Davila, 2000), but limited emphasis has been placed on the relationship between the use of formal MCS at top management levels and product innovation examined from an organizational perspective. Not only are there relatively few empirical studies in both the innovation and MCS literatures that address this relationship at the organizational level, but also the limited prior research appears to provide inconclusive and even contradictory findings. The innovation management literature tends to minimize or ignore the potential role of formal MCS as a factor that may influence successful product innovation (Dougherty & Hardy, 1996; Gerwin & Kolodny, 1992; Leonard-Barton, 1995; Tidd, Bessant, & Pavitt, 1997; Verona, 1999), thus suggesting that the use of formal MCS by top managers is not relevant for successful product innovation. More strikingly, a second line of research present in both the innovation and the management control literature affirms that a widespread use of formal MCS is in fact incompatible with innovation, including product innovation. Here formal MCS are seen as deterrents for creativity and for coping adequately with the uncertainty associated with product innovation (Abernethy & Stoelwinder, 1991; Amabile, 1998; Miles & Snow, 1978; Ouchi, 1977). A third stream of studies has found formal MCS to coexist with product innovation (Ezzamel, 1990; Khandwalla, 1973; Miller & Friesen, 1982). In the context of a “control package” (Otley, 1980 and Otley, 1999) that combines multiple management control elements, while informal MCS and other managerial systems and processes are expected to encourage innovation, formal MCS are expected to block innovation excesses and to help ensure that ideas are translated into effective product innovation and enhanced performance (Bart, 1991; Chenhall & Morris, 1995; Clark & Fujimoto, 1991; Dent, 1990; Kaplan & Norton, 1996; Wheelwright & Clark, 1992). Finally, a fourth group of studies affirms that inasmuch as formal MCS may provide a prioritary agenda and a stimulating forum for the generation and implementation of creative ideas including product development ideas, the most innovative firms are intensive users of formal MCS and an intensive use of MCS may lead to increased innovativeness (Simons, 1990, Simons, 1991 and Simons, 1995a). Overall, both the innovation and the MCS extant research provide inconsistent findings regarding the relationship between formal MCS and product innovation. Some authors have pointed to the different styles of use of formal MCS (Simons, 1990, Simons, 1991 and Simons, 1995a) or the different roles of MCS (Chapman, 1997 and Chapman, 1998) as explanations for these apparently inconsistent studies. This paper focuses on the interactive style of use of formal management control systems as defined by Simons, 1990, Simons, 1991 and Simons, 1995a. On emphasizing the relevance of attributes related to use rather than design and on pointing out the distinct implications of different styles of use of formal MCS, Simons' levers of control framework provides insights that help understand the mentioned apparent inconsistencies. More precisely, Simons' framework contributes to explaining the contradictory findings regarding the direction and significance of the effects of formal MCS on successful innovation as reported in prior literature. In Simons' terms, those studies that find that formal MCS (i.e. feedback and measurement systems) hinder innovation are partial to the extent that they focus exclusively on thermostat-like, diagnostic uses of formal MCS, and ignore the implications of interactive uses of formal MCS. On the contrary, those studies that have found that formal MCS act as facilitators of successful innovation are those that are more comprehensive to the extent that they capture the presence of interactive uses of MCS as well as the dynamic tension between diagnostic and interactive uses of formal MCS. However, while Simons, 1990, Simons, 1991, Simons, 1995a and Simons, 2000 suggests that an interactive control system contributes to successful innovation, this framework is ambiguous and does not clearly discriminate between whether an interactive control system makes companies more innovative or whether it makes innovative companies more successful in terms of improved performance. The purpose of this paper is to explicitly discriminate between the different effects of the interactive use of MCS on product innovation and performance, as well as to assess their significance. As defined in this study, product innovation encompasses the implementation stage (Damanpour, 1991; Wolfe, 1994) and refers to the development and launching of products which are in some respect unique or distinctive from existing products (Higgins, 1996; OECD, 1997; Sánchez & Chaminade, 1998). Consequently, this study aims to clarify the causal model and the explanatory links implied in Simons' framework as they apply to product innovation, explicitly testing whether an interactive control system makes companies more inclined to develop and launch new products or whether it contributes to successfully enhance the impact of the introduction of new products on performance. The following section develops the theoretical arguments that lead to the setting forth of several testable propositions which refer to distinct expected effects of the interactive use of MCS. The Research Methodology and Design section presents the research method, including data collection procedures, operationalization of measurement instruments and model specification. Results are then presented and discussed and interpreted in next two sections. A final section concludes, summarizing the findings, evaluating some of the limitations of the study and introducing some directions for future research.